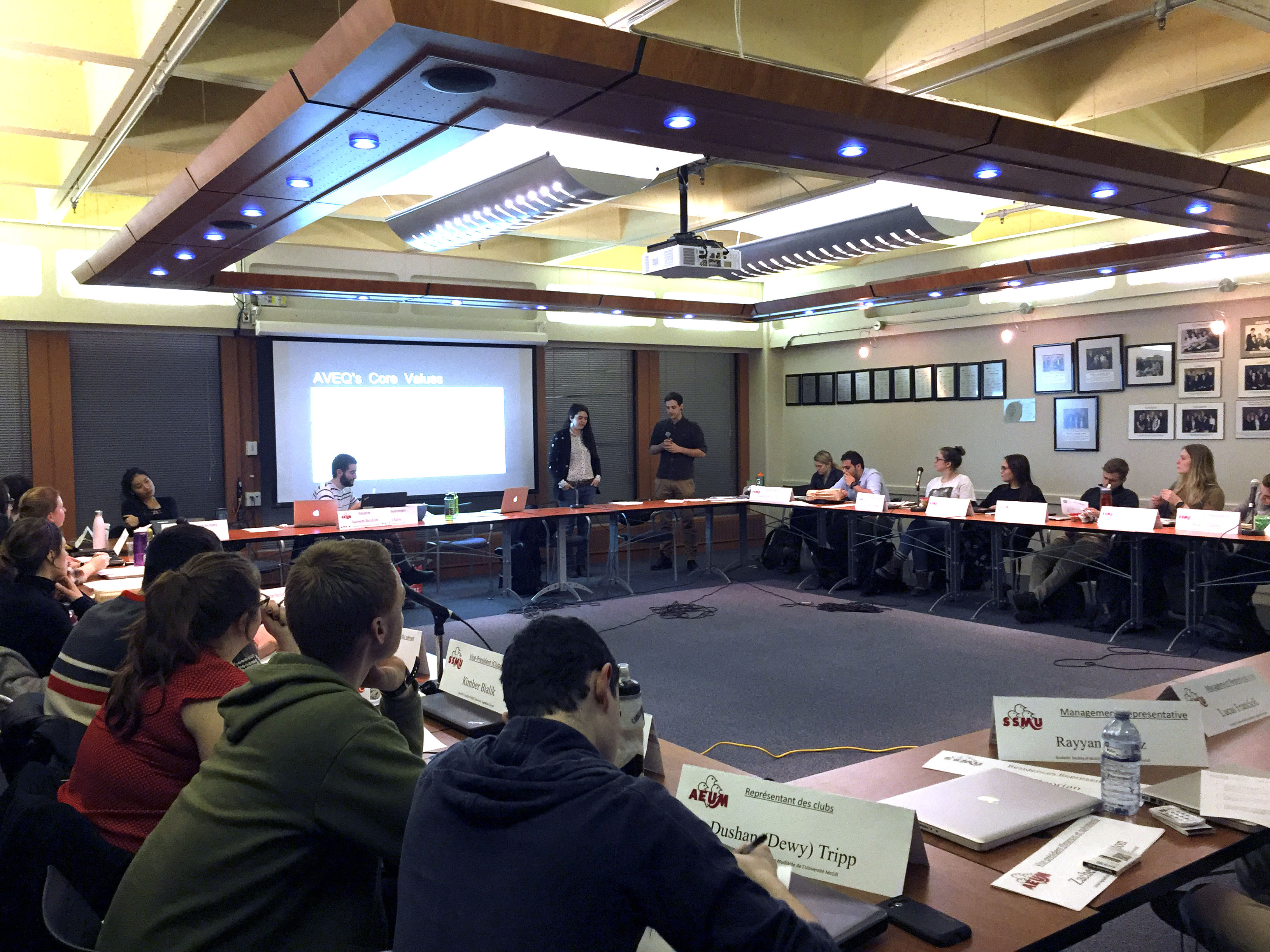 The Students’ Society of McGill University (SSMU) Legislative Council met on January 28 to discuss the promise of joining one of the two emergent Quebec student federations that were formed in the past year, the Association pour la voix étudiante au Québec (AVEQ) and the Union étudiante du Québec (UEQ).

In addition, Council approved several motions to ask a plebiscite question regarding the creation of a smoke-free campus, to adopt a set of messages regarding SSMU’s commitment to develop “harmonious relationships with the permanent residents of the Milton-Parc Community,” and to support a potential Indigenous leadership academy in the Royal Victoria Hospital.

Further, Senate caucus representative David Benrimoh presented a report from the Accountability Committee, which included proposed regulations for the committee. Council decided to consider this report a notice of motion. As such, the regulations will be brought back to Council for consideration at the next meeting.

UEQ’s general coordinator Caroline Aubry and member of the coordinating committee Jonathan Mooney cited solidarity, transparency, accountability, collegiality, credibility, and local sovereignty as the core values of their organization, with a particular focus on local sovereignty.

“If SSMU decides to affiliate in a certain way, if they follow their bylaws, that’s alright. If they want to disaffiliate, that’s their bylaws telling them how to do it. We won’t keep associations [against] their own will,” Aubry said.

The main difference between the two federations remains the voting system and the fees. AVEQ utilizes a one-association-one-vote system, whereas UEQ uses a double majority system. In UEQ’s system, any motion is first voted on based on the one-association-one-vote system and then is approved through a semi-proportional system, where voting power is weighted based on the number of individual members represented by the association.

Misperceptions of SSMU’s involvement in negotiations

Following the federations’ presentations, during the discussion period regarding affiliation, Medicine representative Joshua Chin asked whether, regarding SSMU’s experience with UEQ, “Going back to the early days of [UEQ], where members were signing their contracts in dedicating their involvement in this – we didn’t sign on. […] My question was, was there any opportunity at a later date to sign on to this project?”

When UEQ was first being formed, the student associations present were asked to sign a contract to dedicate their commitment to the project. Because this was in the summer, SSMU had chosen not to sign the contract.

Chin asked, “Was there any opportunity at a later date to sign on to this project?”

“I think that would be a question for your executive team. I really don’t know because at any time any association can sign the contract.”

In response, Aubry said, “I think that would be a question for your executive team. I really don’t know because at any time any association can sign the contract.”

Since last April, when the deliberations on the creation of these two federations began, SSMU VP External Emily Boytinck has been sitting at both tables. This course of action was approved by Council at previous meetings.

Nevertheless, Chin expressed that he found it “disturbing” that a choice to focus attention on a single federation was never brought up to Council.

Chin brought up certain allegations regarding a “lack of transparency” in Boytinck’s involvements with the two federations that was brought to his attention via a Facebook message sent by an anonymous source who is neither a McGill student nor affiliated with either of the two student federations.

According to Boytinck, this person had sent some of the councillors an unpublished report in French, drafted by the Federation étudiante de l’Université de Sherbrooke (FEUS), which has decided to leave the negotiation table of AVEQ.

The FEUS report alleged that SSMU, and therefore Boytinck, were being biased toward AVEQ, despite being directly involved in both federations. The report characterizes this as “problematic.”

According to the report, AVEQ had hired a general coordinator, who was then placed on SSMU payroll. Because of the large size of SSMU, the association has more flexibility when it comes to adding or removing individuals from its payroll. Thus, the AVEQ coordinator was allegedly placed on the SSMU payroll, though they were actually being paid by the Concordia Student Union (CSU) and L’Association générale des étudiant(e)s de l’Université du Québec à Trois-Rivières (AGE UQTR).

“We feel deeply disturbed by this manner of doing things, because it seems that SSMU could proceed with hiring an employee for a provincial association without keeping its members up to date. […It was done] in a biased manner to one of these two [student federation projects],” the report said in French.

“If there was an issue I would have hoped that [councillors] would have brought that up five months ago. And all I’ve been doing is attempting to work on both associations […and] that’s what [Council has] been telling me to do this whole time.”

The report also accused SSMU of doing translations internally for AVEQ, but not for UEQ. The report said, “We consider it an injustice that translation expenses were assured by CSU and SSMU internally, only for AVEQ.”

Details of the FEUS report were discussed in a confidential session, minutes from which are yet to be made public.

In an interview with The Daily, Boytinck explained that she believed that none of her actions were out of order and that she had reported on all these matters in her previous reports to Council.

Boytinck said, “It was […] sort of a slanderous accusation of an association trying to make drama out of this – ‘CSU and SSMU did translation internally!’ and there was no secretiveness behind that, although our translation budgets should be open.”

Boytinck also said that when she first heard about these allegations, she sent an email to councillors. Regarding the allegations, Boytinck said, “These [allegations] are true, but I reported on them. So if there was an issue I would have hoped that [councillors] would have brought that up five months ago. And all I’ve been doing is attempting to work on both associations […and] that’s what [Council has] been telling me to do this whole time.”

On February 11, Council will decide which of the two federations should appear on a referendum question, which will be posed during the referendum period between March 7 and 18.

This article has been updated following the proceedings at Council.