Omega-3s and your body

Fatty acids are an important part of everyone’s health 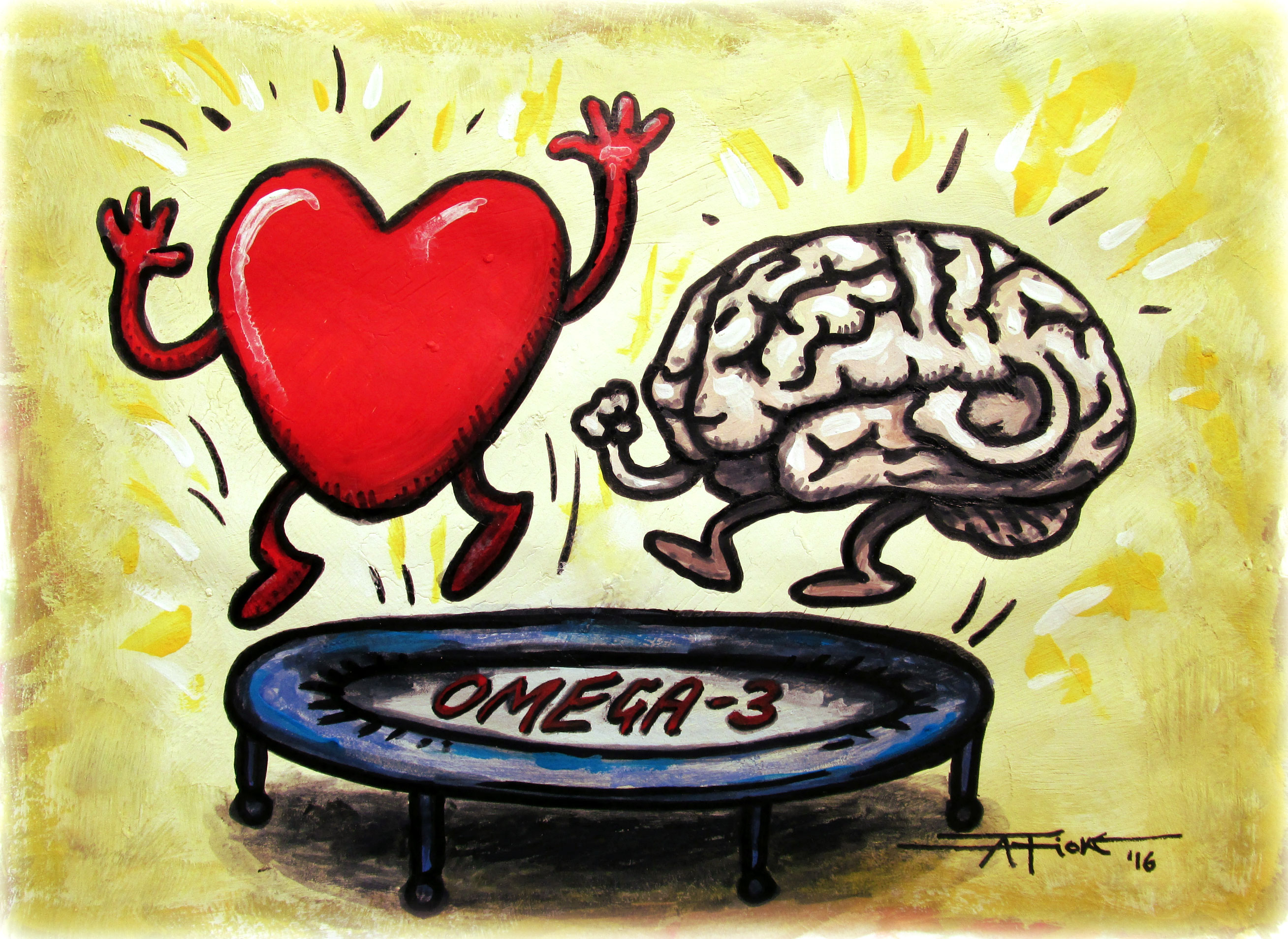 Ever since the 1980s, journal articles have have been proposing that fatty acids (FAs), such as omega-3s, may be beneficial for your brain, especially in regards to proper development of the brain. While there are many types of FAs, the ones most commonly discussed in mainstream news are the omega-3 polyunsaturated FAs, which are important largely because they contain docosahexaenoic acid (DHA). One of the most important roles omega-3s play is in decreasing the risk of cardiovascular disease by protecting endothelial cells, which line the interior surface of blood vessels. They also enhance oxygen flow within the heart, providing the heart with an increased ability to deliver blood. While FAs are clearly important, their full extent is still being uncovered.

Omega-3s are considered “essential” because mammals cannot readily create them. Despite this, approximately a third of the membrane surrounding neuron cells in the brain are actually made up of DHA. While this makes it unsurprising that introducing DHA might influence the neuronal plasma membrane (the lipid membrane that surrounds every neuron), there is some evidence to suggest that DHA can increase membrane fluidity, which facilitates cell function. The exact downstream effects of this have yet to be shown experimentally, but this is a growing area of interest in neuroscience, and its importance is manyfold: omega-3s are known to positively influence a myriad of disorders, such as cholesterol levels, cardiac arrhythmias, inflammation, development of diabetes, and many types of cancers. The exact cell signalling mechanisms in neurons or other cells for these benefits are not yet clear, but research is ongoing, and typically very positive. Additionally, it has been noted that unless someone takes an extremely large dose of omega-3s, there are very few side effects.

How can I get my hands on some?
Starting in the 1950s, fish oil has become synonymous with omega-3, because wild fish and fish oil do contain the FA. However, fish that are grown on farms (referred to as “cultured”) actually contain less omega-3s as compared to their wild counterparts, due to differences in their diets, with the ratio of omega-3 to omega-6 (another FA that the human body cannot produce) two to three times lower in cultured fish. The question is, why are the FAs found in high levels in “fatty” fish such as salmon essential to mammals? The answer comes from the oft-forgotten chloroplasts and phytoplankton – the marine algae that are fishes’ source of omega-3s. Scientists have created new supplemental forms of omega-3s sources from algae, suitable for intake by vegetarians and vegans through these chloroplasts and phytoplankton.

How do omega-3’s affect me?
Along with regular exercise, regulating our diet is key in helping to mitigate diseases and disorders in our bodies. Lower intake of omega-3s, and therefore lack of their beneficial effects, may be putting stress on the individual and therefore the healthcare system. We spend a vast majority of healthcare dollars on treating patients, but omega-3 FAs can keep diseases from emerging in the first place. Even with some research saying otherwise, the overwhelming message from much of the research is that omega-3s are beneficial.

Historically, humans seem to have consumed a proportionate amount (one to one) of omega-6 and omega-3 FAs. However, the typical modern ‘Western food’ may have a ratio as high as 20 to 1 of omega-6s intake as compared to omega-3s, and this has been linked to cardiovascular dysfunction, high levels of inflammation, and prostate cancer. An article published in Scientific Reports in June 2015 has demonstrated that elevating omega-3 FA levels in mice can help improve the profile of their stomach microbiome, as well as facilitate the anti-inflammatory effects of omega-3s. Another interesting aspect of omega-3s is that they have the possibility of being used synergistically (at the same time) as standard chemotherapy for the treatment of cancer. For example, when combined with the drug Taxol, DHA increased the drug’s chemotherapeutic potency (activity of the drug per amount given) by up to 13-fold. Similarly, DHA can work together with the chemotherapeutic drug doxorubicin against breast cancer cells.

It is quickly becoming clear that these fats are an essential ingredient to human health, and are a great addition to our toolbox in the fight against deadly diseases such as those afflicting the heart and cancer. As research continues, we’ll begin to uncover to complete role of omega-3s and other fatty acids in health, which will have large influences on medicine in future.