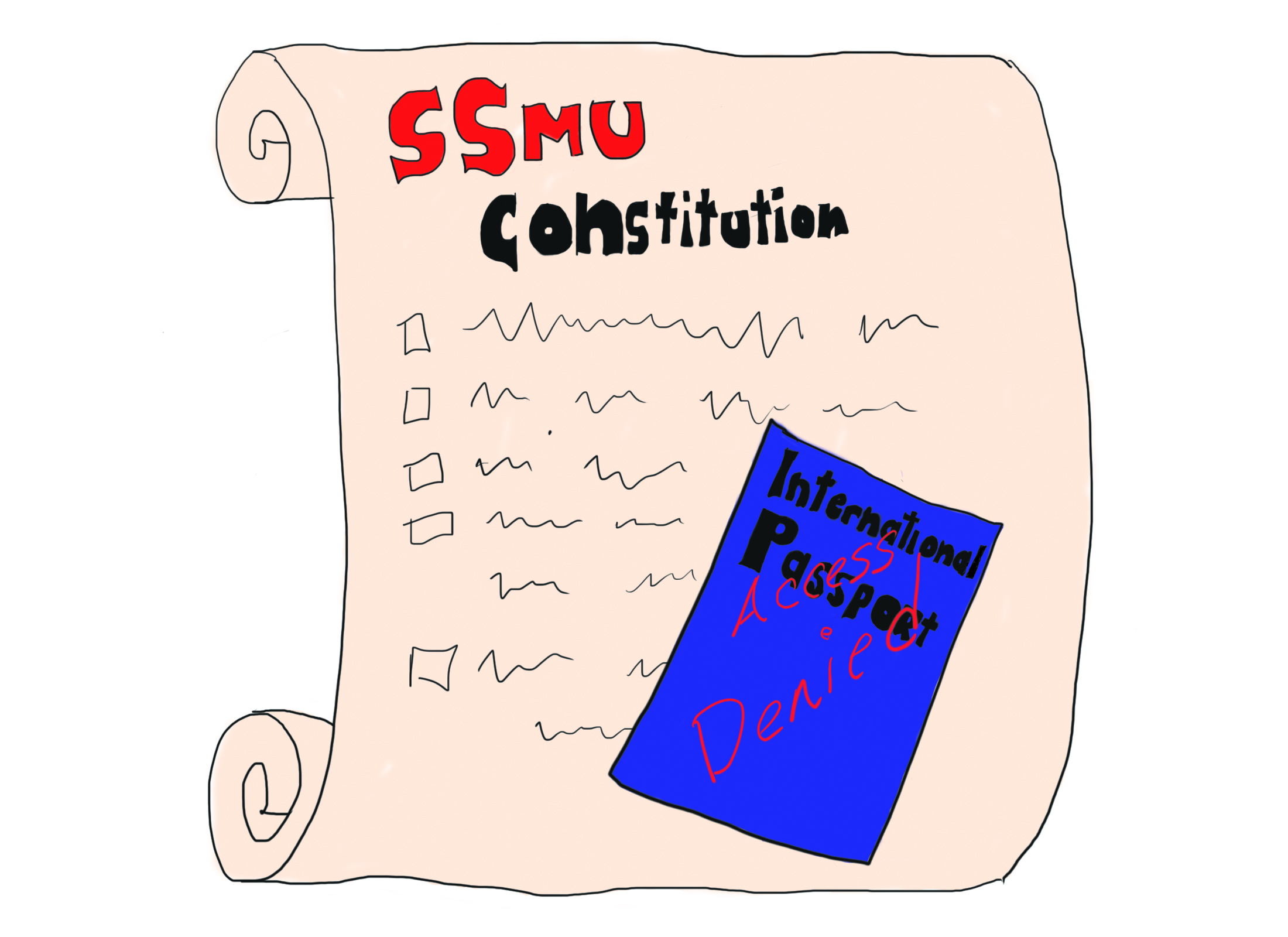 On February 8, The Daily has published a letter from Pauline L’Ecuyer, Director of International Student Services, addressing certain inaccuracies within the article.

As a result of more relaxed measures by Immigration Quebec over the last two years, it has become significantly easier for international students to run for and hold executive positions at the Students’ Society of McGill University (SSMU).

In June 2014, Citizenship and Immigration Canada (CIC) issued a new set of regulations regarding study permits which requires students to be “actively pursuing” their studies while in Canada, which requires them to be full-time students.

All international students must have a valid Quebec Acceptance Certificate (CAQ) and a federally issued study permit to pursue studies in Quebec. The CAQ is issued for the duration of time that a student expects to study in Canada, but can be extended should the student decide to prolong their studies.

SSMU executive positions are full-time, with job contracts stipulating seventy hours per week. As a result, students in these positions almost always take on a part-time course load during their terms. In some instances, their contracts indicate that they can be enrolled in a “maximum of six credits.”

L’Ecuyer told The Daily that in the past, Immigration Quebec has maintained stringent rules requiring students to complete at least 12 credits per semester, in order to approve an extension of their CAQ.

It will change the representation in SSMU and the perspectives here.

Immigration and status requirements have generally been far more relaxed for U.S. citizens than other international students.

“[To work at SSMU], HR told me I just had to get a SIN [social insurance number],” said VP Internal Affairs El-Sharawy, who is a U.S. student. “There was also a missing clause on my study permit so I just went to the border and got it fixed. Honestly, it wasn’t a hard process, but I’m not sure if that’s the case for non-Americans.”

As per Fall 2015 enrollment, out-of-province Canadians make up 25 per cent of McGill’s student population and U.S. students, 7 per cent. McGill’s 45 per cent Quebec population and 22 per cent non-U.S. international population are entirely unrepresented on the SSMU executive.

“We see greater disconnect between international students and Quebec students. They are proportionally less involved [in student politics] than out-of-province students and Americans,” Ibrahim said.
“I’m glad that there have been changes in government structures that will allow international students to hold positions in SSMU,” said SSMU VP External Emily Boytinck. “It will change the representation in SSMU and the perspectives here.”

L’Ecuyer, who also sits on the Advisory Committee on International Students and Immigration (ACISI) for Quebec, said that in the last couple of years, she has seen immigration officers relax their criteria in granting CAQ extensions to students who have taken part-time status due to personal, medical, or humanitarian reasons, including pursuing leadership roles in their community, such as in student government.

L’Ecuyer emphasized, however, that the final decision on a student’s case is at the discretion of the immigration officer, who will take into account the student’s entire status since their arrival in Canada. While being a part-time student during a term served as a SSMU executive would not justify rejecting a student’s CAQ extension application, it might make matters more difficult if they have already been a part-time student in previous semesters since their arrival in Canada.

Having international students could have facilitated more platforms to increase the level of empathy between student groups.

Considering that each case is unique, however, L’Ecuyer highly encouraged any international student considering holding part-time status or running for a SSMU executive position to visit ISS for a free personal consultation with one of ISS’s two immigration lawyers.

Despite SSMU executives’ desire to accurately represent the student body, El-Sharawy said that as the executive is bound by SSMU’s Legislative Council, having a more diverse executive team would likely not have changed any of the executive decisions.

El-Sharawy encouraged non-U.S. international students to take the opportunity of the recently relaxed course status requirements to be involved in the SSMU executive, and continue to increase their leadership involvement in faculty councils.

McGill International Student Network (MISN) President Afreen Aliya said she is hopeful that the change will increase international students’ involvement in student politics and help raise awareness for issues affecting them, such as changes to international fees.

Aliya is confident that MISN’s reach of over 2,000 students will prove instrumental in spreading awareness about the recent changes.

“As an international student far away from home and your support network, you’re a person first – so you have to prioritize your well-being – a student second, and you can pursue a leadership position or politics third,” Costopoulos said. “It’s perfectly possible but it involves certain balancing.”