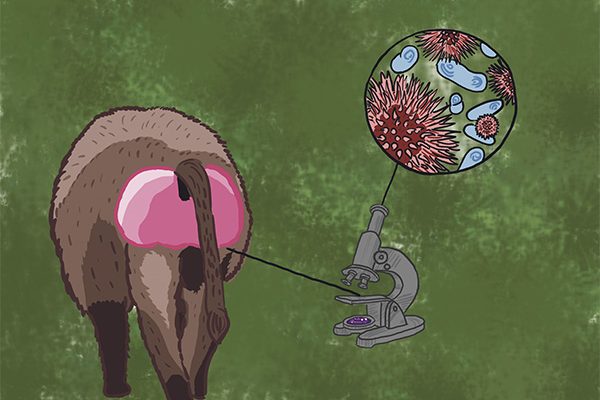 The vagina is an ecosystem home to a plethora of bacterial communities, that consume vaginal nutrients in exchange for defence against disease-causing microbes (microscopic organisms). One of the pioneering researchers of the microbiomes of vaginas was Albert Döderlein, who cultured bacteria from vaginal secretions in 1892. He discovered a bacteria, now known as Lactobacillus, that ferments sugars into lactic acid. The lactic acid reduces vaginal pH, and thus prevents the growth of dangerous pathogens. Since then, scientists have reported that reduced Lactobacillus incurs vulnerability to preterm labour, yeast infections, sexually transmitted infections (including HIV), urinary tract infections, and bacterial vaginosis (BV), a vaginal disorder characterized by an abnormal vaginal odour and discharge. However, many microbes resist laboratory cultivation, leading to a simplified picture of the vagina’s bacterial ecology. Recently, DNA sequencing studies have questioned the dogma that Lactobacillus is the only predominant vaginal microbe present.

In 2011, Jacques Ravel and other scientists of the Institute for Genome Sciences in Baltimore, investigated vaginal microbial communities of healthy, asymptomatic participants in four ethnic groups (Asian, Black, Hispanic, and white). The study uncovered that, while the definitive causes of variation among vaginal microbiomes (the microbe ecosystem) are unknown, the causes of differences between ethnicities could include differences in immune systems and substances present in the vagina. The report also stipulates that health practices, personal hygiene, birth control, and sexual behaviour have all been shown to affect the microbial makeup of vaginas.

Differences in immune systems, health practices, personal hygiene, birth control, and sexual behaviour have all been shown to affect the makeup of vaginas.

Incidentally, it is known that vaginal douching – washing out the vagina using water or other fluids – destabilizes the vaginal microbiome and increases vulnerability to infections.

The research of primates
Süleyman Yildirim and fellow reserachers at the Institute for Genomic Biology in Illinois, found in a study that increased vaginal length and volume, multiple partners, and genital swelling, result in increased exposure to microbes in the case of primates. Accordingly, the authors reported that primate vaginal microbial communities vary as a function of these traits, as well as the geographic origin of each primate species.

In humans, vaginal biodiversity decreases in puberty, during which period certain bacterial communities become predominant in the vagina, a development thought to maximize fertility and protection against pathogens. Stability of vaginal microbiomes has been reported to decrease during menstruation and increase during the follicular phase (higher hormone count) of the menstrual cycle.

Mayu Uchihashi and fellow researchers at the University of Michigan decided to study baboon vaginas, seeking to establish a relationship in baboon vaginal microbiome composition with age and reproductive cycle. The biodiversity and pH of non-human primate vaginas is significantly greater than among those of humans. There is a relative scarcity of Lactobacillus in non-human primates. Although microbial diversity in baboons did not vary with reproductive cycling or menstruation, it did reduce during puberty, presumably to optimize bacterial composition for each baboon’s health with the introduction of sexual activity.

As baboons have a relative scarcity of Lactobacillus, Uchihashi and colleagues proposed that the high microbial diversity of baboons leads to greater competition for limited niches (specialized environments for survival), which inhibit colonization (invasion)of infectious bacteria. However, this would suggest that bacterial diversity ought to increase in baboons during puberty, whereas the study found a decrease. The authors proposed that maintaining high bacterial diversity requires high amounts of energy, but that the fewer species represent a wider variation in function, and thus effectively compete with pathogens for limited niches. Thus, pruning of vaginal bacterial communities during puberty may select out functionally-redundant bacteria. Surprisingly, bacteria associated with BV and considered pathogenic in humans, such as Prevotella, Sneathia, and Mobiluncus, were found in healthy, asymptomatic baboons.

Vaginal ecosystems are dynamic and complex […] There is no “normal” vaginal microbiome.

These findings reiterate that the vaginal microbiome is an unpredictable and incredibly complex ecosystem. Some scientists such as Ravel have proposed computational models as a solution to this complexity, so these microbiomes cannot be reduced to ratios of bacterial communities. Understanding the vaginal microbiome in humans and other primates has implications for vaginal health such as BV, STIs, and fertility, as well as appreciation of vaginal ecology, brimming with life forms whose dynamics are essential to vaginal health.

It's easy! You can email the editors at scitech@mcgilldaily.com!