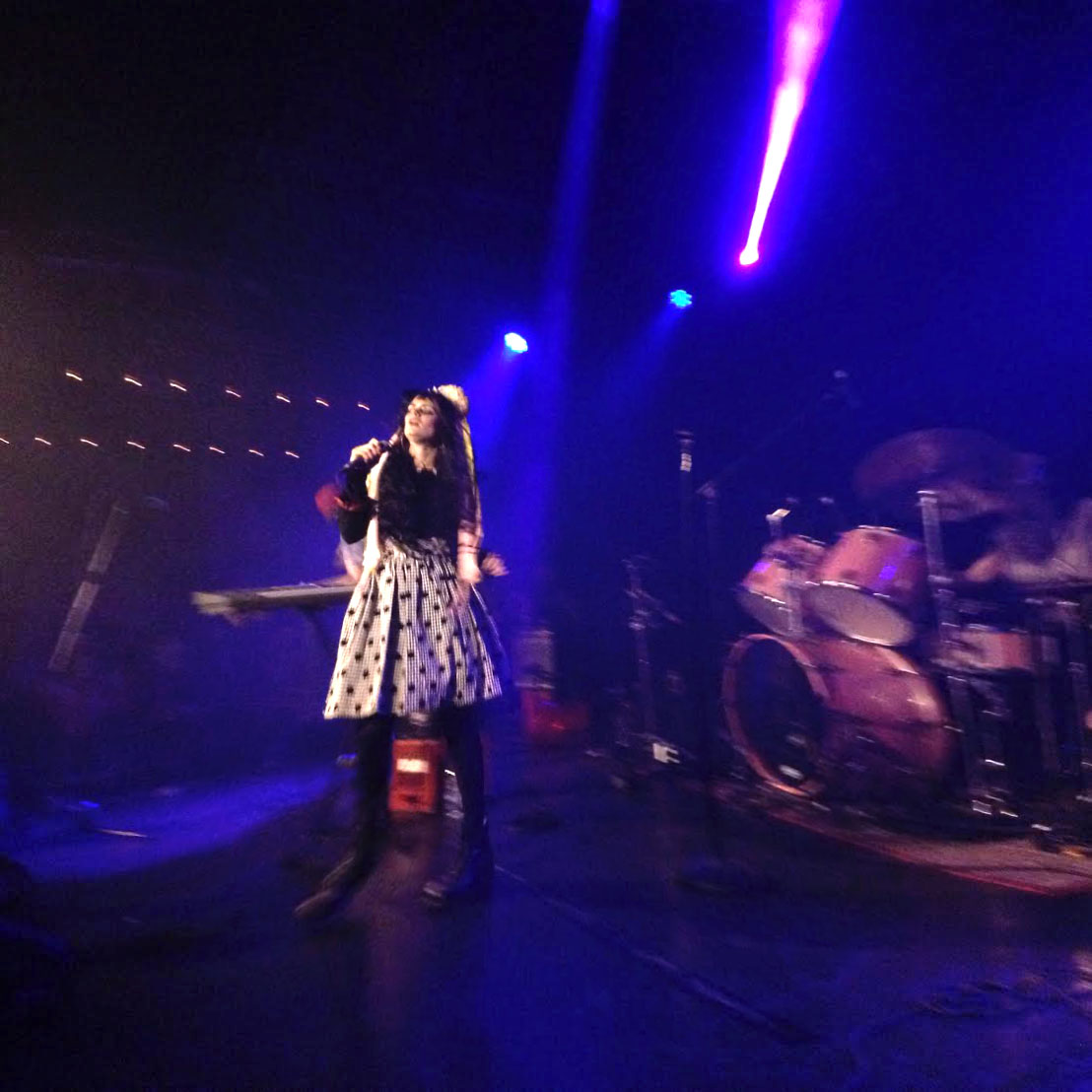 Montreal record label Arbutus Records has produced several dazzling pop acts in the past few years, from the wildly successful Grimes to the sultry Sean Nicholas Savage. Not to be left off this list is TOPS, a band whose ethereal synths, catchy hooks, and breathy vocals have propelled them to the forefront of the Montreal music scene. Currently on tour with California group Puro Instinct, TOPS took the stage on October 31 at Fairmount Theatre for a Halloween show in their hometown.

The sold out show started off a little slowly, the energy in the room low as the group began with “Circle in the Dark,” off their second album, Picture You Staring.

But things picked up soon enough as the band broke into one of their bigger, bouncier tracks, “Change of Heart.” Before long, lead singer Jane Penny was spinning all over the stage. Penny and bassist Alana DeVito were dressed for the occasion in black wigs with pink ribbons and dresses to match.

Currently on tour with California group Puro Instinct, TOPS took the stage on October 31 at Fairmount Theatre for a Halloween show in their hometown.

The band played a number of new songs throughout the set, such as the recently released “Anything,” and “Hollow Sound of the Morning Chimes,” in which David Carriere captivated the crowd with his smooth guitar playing. Penny’s recorded vocals, light and airy in Picture You Staring, returned to the punkier belting of the band’s first album in several of these new tracks, adding a harshness that charged the live performance.

They only played for a short but sweet 45 minutes, but that was all they needed to get the crowd eating out of the palms of their hands. By the time they played their eighties-infused ballad “Outside,” the whole audience was singing along in a collective John Hughes fantasy dream. When they launched into their second to last song, “Way to Be Loved,” the room became a mosh pit. Within seconds, costumed crowd members took over the stage, dancing around the band and belting out the lyrics to the group’s most popular track.

Band members were hardly fazed, continuing to play with perfect coolness. Once security had cleared everyone off the stage, they launched into The Pretenders’ “Don’t Get Me Wrong,” – a solid cover, despite being an anticlimactic way to close after the rowdiness of “Way to Be Loved.”

After the show, the band slipped into the crowd and danced along with everyone else to the Blue Hawaii DJ set that followed. TOPS like to have fun, and it shows in their sets – they know how to get a crowd going without compromising the quality of their sound. Their dreamy yet dance-like tracks made for the perfect Halloween party; the show may not have been very spooky, but it certainly was a treat.