Current burden on executives “not sustainable” 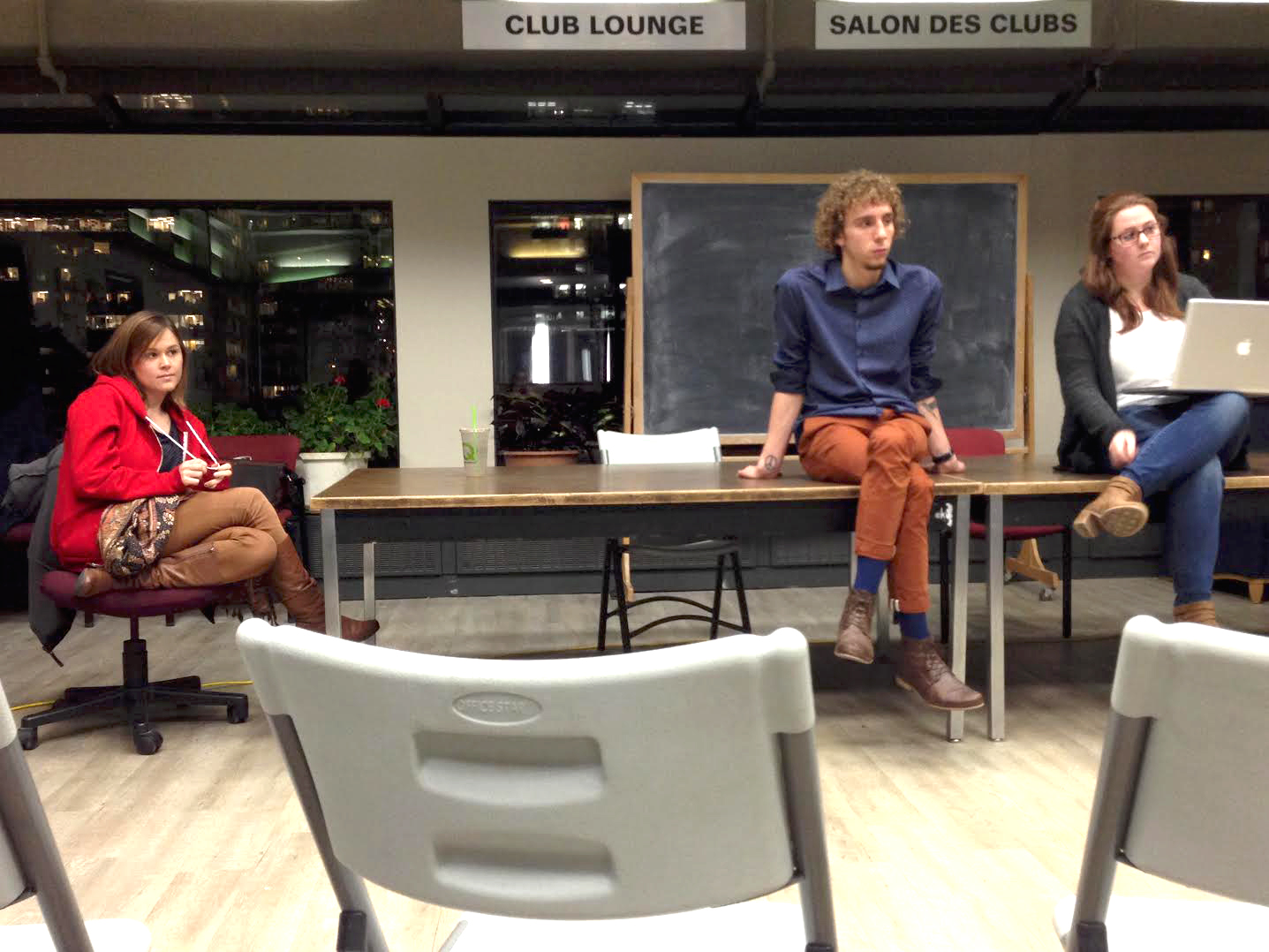 On November 26, three executives of the Students’ Society of McGill University (SSMU) held an open forum in the SSMU Clubs Lounge focused on community input on SSMU’s planned restructuring. The executives present were VP University Affairs Chloe Rourke, VP Clubs & Services Kimber Bialik, and VP Finance and Operations Zacheriah Houston, as their portfolios are the ones most affected by the restructuring. The event was attended by around twenty students.

The restructuring is a response to a decade of expanding SSMU activities, which has increased the burden on each individual executive to an unsustainable level.

At the Fall 2015 SSMU General Assembly (GA), President Kareem Ibrahim noted that there were multiple restructuring proposals, the most extensively discussed being the addition of a seventh executive.

At the open forum, Rourke explained the decision to add a seventh executive instead of hiring more permanent staff, stating, “Every other staff [member] gets minimum wage, permanent staff get benefits, and we [as executives] work way more than full-time hours. So in terms of money for labour, [executives] are kind of the cheapest option for students.”

Alexei Simakov, a U4 International Development Studies student, asked whether the workload could be an “isolated situation” due to the recent resignations of SSMU General Manager (GM) Jennifer Varkonyi and VP Internal Lola Baraldi.

“Would it not naturally resolve itself if there [was] a GM, and there was a full-time VP Internal?” Simakov asked.

Rourke responded that this is not the only year that executives have been overworked, as is evident from past executives’ exit reports.

“That leaves little to no time to do anything to advance the portfolio. There are dozens of projects that I had thought I would like to achieve this year that are just not going to happen, because so much of my time is taken up with administrative work,” continued Houston.

“Executives are the foundation of SSMU.”

Other students disagreed with the idea that a seventh executive would solve SSMU’s problems. Omar El-Sharawy, a U1 Economics student and recently elected VP Internal, who was still a candidate at the time of the forum, talked about the lack of student trust in SSMU executives, citing the fact that the SSMU Accountability Committee, established in 2013 and mandated to meet every month, has not met once this year.

“How can I trust the people running these things if, when I vote for them, […] this shit still happens and I’m still not informed and people still aren’t held accountable?” asked El-Sharawy. “I don’t think [SSMU] needs to be reconstructed, the foundation of it has to be stronger so that we can build upon it.”

“Executives are the foundation of SSMU,” responded Rourke.

“We should fix the execs’ workload, and then we can start complaining about everything else,” concurred a student in the audience.

One student suggested adding only one executive may not even be enough, saying, “I’m okay with paying more if it means I’d be getting more.”

Alternate proposals from students also included creating a cyclical unit review committee to recommend changes to reform SSMU, with changes to be implemented through referendum.

The executives also clarified some logistical points about the addition of a seventh executive. When asked where the money for the position would come from, Houston responded that it was “to be determined,” but added that it would likely be sourced from reshuffling other staff salaries, saying that “in the long term, I’m not worried.”

Bialik explained that January 2016 would be devoted to student consultation and gathering feedback. If the response is favourable, a referendum to amend the SSMU Constitution will be called at the end of the month.

After about an hour of discussion and questions, the executives presented a breakdown of the current structure and the proposed redistribution of tasks.

Among other changes, the portfolio items Student Services and Mental Health would be reassigned from VP University Affairs to VP Clubs & Services, which would then be renamed to VP Student Life. VP Finance and Operations would separate into two positions, VP Finance and VP Operations. The newly created VP Operations position would be tasked in part with building management and student-run operations such as Gerts and MiniCourses.

Emphasizing the ramifications of overworked executives, Rourke said, “Eighty hours a week is not sustainable [or] equitable. I’m less of use to the people around me when I’ve worked that many hours a week. […] The decisions we are making are very important, significant decisions that affect students in a large capacity. The ones that really suffer at the end of the day are students.”