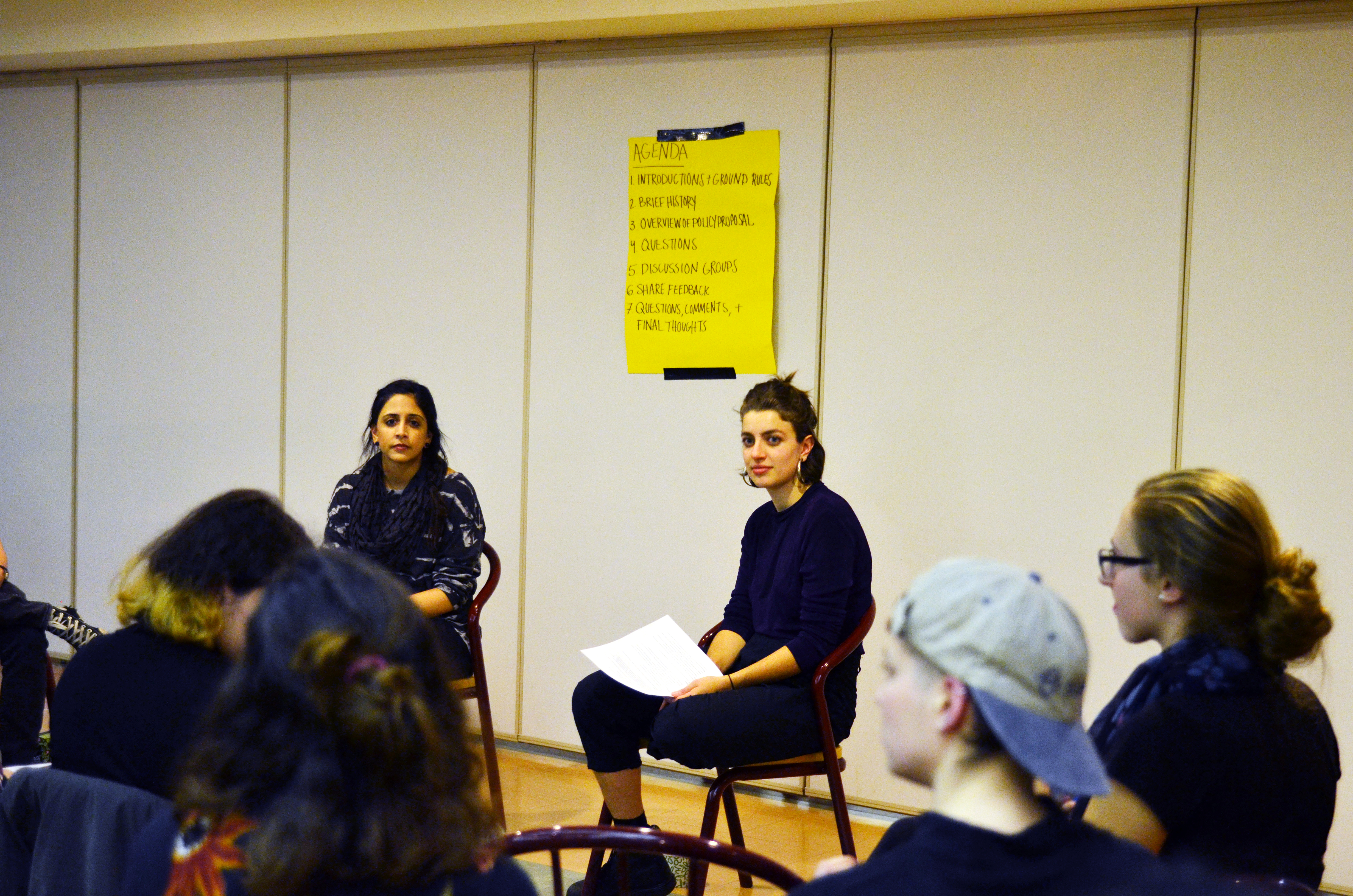 The student-run Sexual Assault Policy (SAP) Working Group held a town hall on November 19 to discuss the incorporation of intersectionality in the sexual assault policy it has been drafting since February 2014.

The SAP Working Group was created following backlash to the administration’s response to sexual assault allegations against three former R*dmen football players, an incident which became known to the McGill community in the fall of 2013.

This, however, was not what first sparked discussion on the need for a sexual assault policy at McGill. Speaking at the town hall, Safina Adatia, advocacy branch member at the Sexual Assault Centre of the McGill Students’ Society (SACOMSS) and member of the SAP Working Group, said, “People have been discussing this issue for a very long time, obviously beyond when [the SAP Working Group was] formed.”

Adatia also explained that McGill does have a current Policy on Harassment, Sexual Harassment and Discrimination Prohibited by Law; however, a policy focusing specifically on sexual assault does not exist.

“As a largely white, able-bodied group, we felt that the policy would inherently reflect our lived experiences and hence centre around our identities.”

Around March 2015, it came to the SAP Working Group’s attention that the policy might not be intersectional enough. Speaking to this, Adatia said, “As a largely white, able-bodied group, we felt that the policy would inherently reflect our lived experiences and hence centre around our identities.”

According to the Facebook event description for the town hall, last spring the SAP Working Group “attempted to incorporate intersectionality into the policy proposal by consulting with different groups committed to anti-oppressive work. However, these groups were presented with a hefty document and short timelines, leading them to express that [the SAP Working Group was] not approaching instituting intersectionality in a genuine and accessible way.”

The town hall was part of a larger process of consultation that the SAP Working Group is undertaking in order to address these criticisms. The timeline for the proposal was pushed back, and the group committed to spending the Fall 2015 semester engaging with more anti-oppression groups and incorporating intersectionality into the policy.

For instance, the latest version of the policy proposal, dated June 9, includes a description of intersectionality, “an approach which recognizes that individuals may experience oppression differently due to their membership in different social groups.”

“One of the things that we felt was pretty important is [for] the list of ‘-isms’ [be] standardized or made consistent across the whole document.”

Addressing the group, Angela Yu, a member of the Post-Graduate Students’ Society (PGSS) Equity and Diversity Committee, brought up the fact that the policy lists various “-isms,” such as racism and sexism, at different points, but that the lists were not consistent.

“One of the things that we felt was pretty important is [for] the list of ‘-isms’ [be] standardized or made consistent across the whole document. So that way, it never seems like it’s jargon, but it’s actually very much what the whole document is centred around,” Yu said.

Talia Gruber, a member of the SAP Working Group, also brought up the fact that while the policy mentions Indigenous people several times, the word “colonialism” never makes an appearance.

Kai O’Doherty, a member of the QPIRG-McGill Board of Directors who has been involved with the SAP Working Group, told The Daily that the small size of the town hall discussion provided a feedback channel that was more extensive than would be a more crowded session.

“I think it would’ve been great to see more people, but I’m happy that the people who came, came. We had a substantive discussion.”

“I think it would’ve been great to see more people, but I’m happy that the people who came, came. We had a substantive discussion. I think when there are few people, it’s easier to have more in-depth discussion. […] I think it’ll prompt us to make sure that we really work with the feedback we got from other people, as well,” O’Doherty said.

Speaking to The Daily after the town hall, Yu said, “I was told that so far there hasn’t been very much [graduate] student participation on this project, and I think that partially is due to a disconnect between things at the graduate student level and what’s happening among undergraduates.”

“I think the fact that [the SAP Working Group was] able to put things to a stop to give more thought to intersectionality is very encouraging. […] Obviously, [it]seems like there’s still a lot of work and discussion that needs to happen. […] It seems to be so collaborative thus far, I think that’s really good,” Yu said.