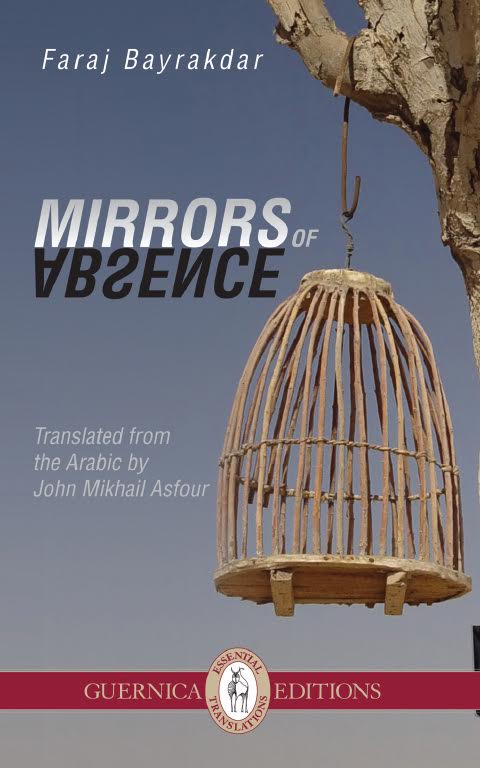 “Intro,” the opening poem of Mirrors of Absence, projects vivid images of reflection into a whirlwind of thought. It finishes with the stark phrase, “nothing at all.” This is an apt introduction to Faraj Bayrakdar’s book of short verses which complicates ideas of identity, freedom, and imprisonment – all set within the context of a poet struggling with his identity while living under a tyrannical regime.

Faraj Bayrakadar is an award-winning Syrian writer who was imprisoned by the Hafez al-Assad regime in 1987. He was released 14 years later, and has been living in Sweden since 2005. Following his release, he published several books of poetry and a book of prose. Mirrors of Absence is his fifth book of poetry, published in 2015 in Arabic, and translated into English by John Mikhail Asfour.

The only poem that is titled in the collection is “Intro” – the rest are numbered and trail off in stream of consciousness narratives, loosely connected by unnamed figures, absences, and repeated reflections.

This is an apt introduction to Faraj Bayrakdar’s book of short verses which complicates ideas of identity, freedom, and imprisonment – all set within the context of a poet struggling with his identity while living under a tyrannical regime.

While some longer poems are marked by a cutting violence, others are composed of short lines that impose a juxtaposition between anger and resigned sorrow. Such lines cast this sorrow toward a constrained God who is silently watching the treachery unfold.

As the collection unravels, one begins to connect with the loneliness that the speaker is experiencing. Certain figures, such as the daughter, exist only as interwoven voices within the poems, never fully materializing as complete characters. This absence of secondary voices stresses the chasm between the imprisoned voice and the outside world. The vague unsubstantiated pronouns also emphasize the struggle of identities within the speaker, as he loses his anchor to reality and is pressed through the structural disintegration of time.

Words lose their meaning over the course of the collection as well. Many poems include repeated lines – desperately trying to convey the inability of words to fully express the violent erasure of voice that is inherent to imprisonment.

This absence of secondary voices stresses the chasm between the imprisoned voice and the outside world.

Mirrors of Absence is a powerful collection of poetry that entangles the reader within the nebulous and peripheral existence of the speaker, which can be attributed to Bayrakdar’s own experiences of imprisonment.

Staying true to the title, the reader becomes the object of reflection by engaging in a dialogue with the text. The simplicity of the strong and pointed phrases allows readers to explore and perhaps lose themselves in the different layers of meaning. When readers comes up for air, they are just as implicated in the final interpretation as the author’s original intention, reflecting their own internal state onto the poetry.

Much of the directness and straightforward nature of this translation can be attributed to John Mikhail Asfour. However, as with all translation, a worry remains over the ideas that are potentially lost in translation or untranslatable. This inevitability evokes another tragic sense of absence that further adds to the layers of restrained sorrow surrounding the work.

Although a reader cannot possibly experience the full calamity faced by those imprisoned in an oppressive state simply by reading the short poems, Mirrors of Absence acutely captures the inner turmoil of the speaker and leaves the reader struck by the loaded verse.