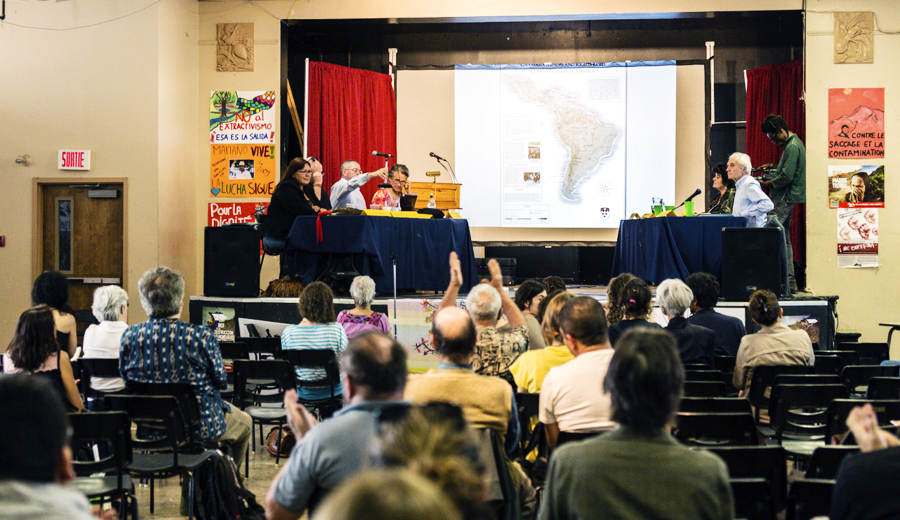 On November 12, the McGill Research Group Investigating Canadian Mining in Latin America (MICLA) hosted an event with Guatemalan journalist Luis Solano. The talk centred around the criminalization of land defenders in Guatemala, the role of the Canadian mining industry in the destruction of the land, the violation of human rights, and the persecution of environmental activists.

Sharing the stage with Solano were Pearl Eliadis, a human rights lawyer and member of the McGill Centre for Human Rights & Legal Pluralism; Aniseto López, a Guatemalan activist; and Jennifer Moore, coordinator of the Latin America Program for MiningWatch Canada.

MICLA, in partnership with MiningWatch Canada, the Committee for Human Rights in Latin America, Voices-Voix, and many other organizations, held the event in the auditorium of the Otto Maass Chemistry building, where over 200 students and community members gathered.

Solano’s talk focused on the damage perpetrated by the Vancouver-based company Tahoe Resources Inc., and the complicity of the Canadian government, transnational corporations, and military contractors in the crisis taking place in southeastern Guatemala.

Solano said, “The Tahoe Resources project is not only a mining project but a part of a greater economic model in Guatemala, […] repeating a pattern found across the world.”

“The Tahoe Resources project is not only a mining project but a part of a greater economic model in Guatemala, […] repeating a pattern found across the world.”

Tahoe Resources Inc. acquired significant land concessions in Guatemala in 2010, when it bought the Escobal silver deposit from Goldcorp Inc., another Vancouver-based company. Solano said that the Escobal project was then undertaken without the consultation and consent of the local communities. In fact, according to Solano, many locals were unaware of the project or the nature thereof until a few years after its construction.

Since 2010, resistance and opposition to the development and the continued operation of the mine have been met with repression, criminalization, and militarization, despite the peaceful nature of the protests.

“They detained people illegally. They get the public ministry support to authorize these arrests, they create these lists of ‘troublemakers’ that they give to the military to arrest them,” said Solano. “It sows terror among people.”

To draw parallels between Guatemala and Canada with regards to governmental action against activism, Eliadis brought up the role of Canada’s anti-terrorism act Bill C-51, which can potentially criminalize environmental and Indigenous activism. As such, said Eliadis, mining companies can destroy the land and perpetrate gross violations of human rights with impunity.

“They get the public ministry support to authorize these arrests, they create these lists of ‘troublemakers’ that they give to the military to arrest them.”

According to the speakers, land defenders in Guatemala are criminalized and labelled as terrorists, and have been targeted by security contractors hired by Tahoe Resources Inc. and the Guatemalan military forces.

However, according to Solano, the problem is “not just military, it’s much more complex; it’s a spiderweb of counterinsurgency.”

Aidan Gilchrist-Blackwood, a U2 Political Science and History student and member of MICLA who attended the event, said in an interview with The Daily, “The criminalization of land defenders is an important human rights issue, but it gets very little coverage in the Canadian media. […] It’s having a major impact on Indigenous peoples both in Canada and around the world.”

Addressing students about the importance of collective action, Eliadis said, “We must assure that there is no impunity, that’s where you all come in.”