In conversation with poet Domenica Martinello 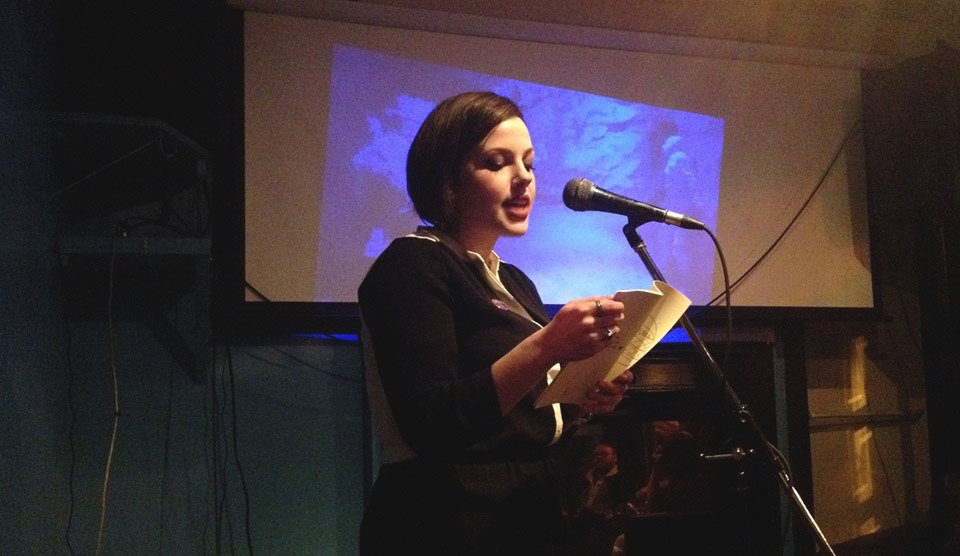 “How exciting is it/not to be at Port Lligat/learning Portuguese in Bilbao so you can go to Brazil.”
In reading the opening lines of Frank O’Hara’s “Hôtel Particulier,” it becomes abundantly clear how the American poet has left an imprint on Montreal-born poet Domenica Martinello. If people can be divided into those who pragmatically plan ahead and those who fully embrace varied experiences, knowing far too well the possibility of hitting a wall, O’Hara and Martinello are of the latter kind.

After receiving her BA in creative writing at Concordia, Martinello was part of an exodus of English-speaking talent from Montreal to Toronto, due to the decreasing space given to artists in the city. A $2.5 million budget cut to the Quebec arts and letters council program (CALQ) is the latest of a flurry of budget cuts to the province’s arts scene, with far-reaching consequences.

Martinello’s latest chapbook, Interzones, exposes the lifeblood of her artistic spirit, which challenges the status quo on gender roles and questions her surrounding space with a deep sense of self-awareness. In so doing, she has gotten a well-deserved nod from Toronto’s literary circles by getting published in online journals, including Lemon Hound and carte blanche, and has reinforced her position as a Canadian poet to watch.

Martinello’s tone is sometimes sentimentally tender, often carnal, with notes of the abject; it is one that is engaging and speaks starkly of truth. The tone is emblematic of Martinello’s inexorable drive, from endless nights of reworking sentences to find the words to reflect an accumulation of extraordinary experiences. These experiences include bitter, harrowing ends, but that doesn’t matter to Martinello, because those who avoid vulnerability avoid meaningful experiences.

What makes her work so pleasant to read and listen to is her dexterous depiction of a full range of encounters – from her descriptions of mundane Toronto workdays to surprisingly anatomical details of intercourse, all presented without compromise.

Martinello sat down with The Daily to talk about juggling work, reading and writing in Toronto, and her latest chapbook Interzones.

The McGill Daily (MD): Have you read anything recently that you’ve particularly enjoyed or that has marked your own work?

Domenica Martinello (DM): What I’m really pulled to is prose that blurs genre and defies easy categories. The feminist tradition is full of exciting cross-genre writing – Hélène Cixous and Adrienne Rich jump to mind – that blends poetry, theory, activism, essay, fragment, and manifesto, sometimes all in the same text. Recently I’ve read and loved Chris Kraus’ I Love Dick and Kate Zambreno’s Heroines, two books with novel-like qualities that could also be filed away under fiction, literary or art criticism, gender studies, or personal essay. They are both innovative texts that parse challenging ideas while being unapologetically raw and readable. Basically, ‘fuck form’ texts.

When I was in university, I had a creative non-fiction writing workshop. Each time I turned in a non-fiction piece, my professor would praise the energy of the writing, but warned me, rightly so, that editors wouldn’t know what to do with my fragmented essay hybrids if I ever wanted to publish. Though it can be hard to find an audience or a ‘market’ for this type of writing, it’s what excites me most to read.

MD: In your work you talk about the adaptation process behind moving to Toronto in quite crude words. Earlier this year, Jay Baruchel, in a controversial interview with the National Post, talked about linguistic tensions and Quebec’s politics as reasons for leaving Montreal. Would you attribute this exodus to the same things, and how have you fared in your transition to your new surroundings?

DM: I’m hesitant to throw my coin in with Baruchel, though it’s undoubtedly true – there has been an exodus of sorts. I feel like the Anglo writing community in Montreal is very small and insular, mostly orbiting around the university. You can view this as negative or positive, depending on your perspective, but I personally find it a bit stifling. Toronto feels huge and open in comparison. There are so many different things going on, and I have felt only warmth and support from other writers here.

One stereotype about Toronto I’ve found to be true is that people’s lives revolve around work. The culture does not cater to la vie de bohème the way it does in Montreal. There is something nice about the quirky character of Montreal and Montrealers, their love of life, politics, and pleasure. Alternatively, writers, publishers, and booksellers in Toronto apply their […] drive and work ethic to accomplish gargantuan things for Canadian arts and letters, and that’s inspiring. Though, some Montreal expat friends of mine absolutely hate it here and I understand that too.

MD: Do you feel like your work is markedly influenced by your home cities, or would you consider yourself as more of a cosmopolitan poet?

DM: I do think that my surroundings have influenced me. One thing that fascinated me after moving from Montreal to Toronto was how similar and dissimilar cities can be. A city is a city is a city – except not. After moving, I felt stuck in this liminal, in-between place – imagine a Venn diagram, and you’re trapped where the overlap occurs. Things feel uncanny, not right. From that vantage point, you look back and forth between the two sections that are clearly separate from each other, without being able to navigate those spaces. This was the main structuring principle of […] Interzones.

MD: It seemed for a long while that the world of poetry was a bullhorn for the tired trope of the misunderstood middle-class man who reads Bukowski, listens to Bob Dylan, and sips on whiskey on the rocks. Do you think that there’s still much of the same power dynamics behind what is put forward in artistic communities?

DM: I think so, yes, but gains are being made. I think you’d be surprised to find how ‘likable’ and resilient that trope is. We are very fond and forgiving of our great, white misunderstood men. But there are a lot of women doing their work and being loud about it, taking up more public space, and not letting the injustice of toxic power dynamics go unchecked.

Unfortunately, the burden of change often falls on the very communities that are being marginalized – women of colour, queer women, trans women, [gender non-conforming] people. […] There’s been a lot more transparency in our artistic communities, in great part [due] to organizations like Canadian Women in Literary Arts (CWILA) who build meaningful dialogues around issues of gender and representation in the literary world. But there’s still work to be done.

MD: Your depiction of sexual encounters bears a tone of quasi-detachment, focusing more often on accurate anatomical descriptions than romanticizing euphemisms. It almost feels like an inversion of narratives where lust and envy have been abundantly utilized by male authors in an effort to objectify female sexuality. You seem to be using just that to challenge gender roles.

DM: I do think that my writing on sexuality aims to challenge gender roles and subvert the male gaze. By writing starkly and openly about female desire – it’s a topic worthy of exploration just like anything else – I feel as if I am reclaiming the power to narrate, contextualize, and validate my own experiences. Yes, I want to reclaim the word “cunt;” yes, I want to be tender; yes, I want to break down the body to its most barren anatomical parts. I want to do all these things and more, and I don’t want someone else to do it for me. There is still an undercurrent of shame when I perform some of these erotic poems, like I’ve just ‘outed’ myself, or have opened the door to an inappropriate or unintellectual response to my work. Which goes to show how deeply we internalize stigmas.

MD: Any parting advice for potential authors or artists in general who wonder how to juggle work with their social lives and artistic creations?

DM: I haven’t quite figured out how to juggle writing with supporting myself and making a living and all that. I recently quit my decent-paying, high-stress day job and am doing some freelance work and weekends at a bacon sandwich shop. It is incredibly difficult and I think it’s dishonest to pretend otherwise.

What little advice I can offer has been given to me by better, smarter writers. First: embrace rejection. It is a huge part of the writing life. Feel bad about it briefly and move on. Second: read voraciously. I truly believe reading every day is more important to your craft than writing every day. Lastly: don’t talk about writing, just do it. That guy at the bar talking so animatedly about how he’s writing a great novel? That guy used to make me feel lazy and terrible about my own writing – often chugging along slowly and bumpily. But I’ve come to realize that Bar Guy will probably be talking about working on a novel for the next 15 years and never finish it. Sit in your chair every day and do the work. It is not glamorous work. It doesn’t get easier. But once you’re done, you can talk about it until you’re blue in the face, [though you] probably won’t want to. Be proud of yourself, enjoy your moment, and then get back to writing.

Interzones is available for purchase on Etsy.