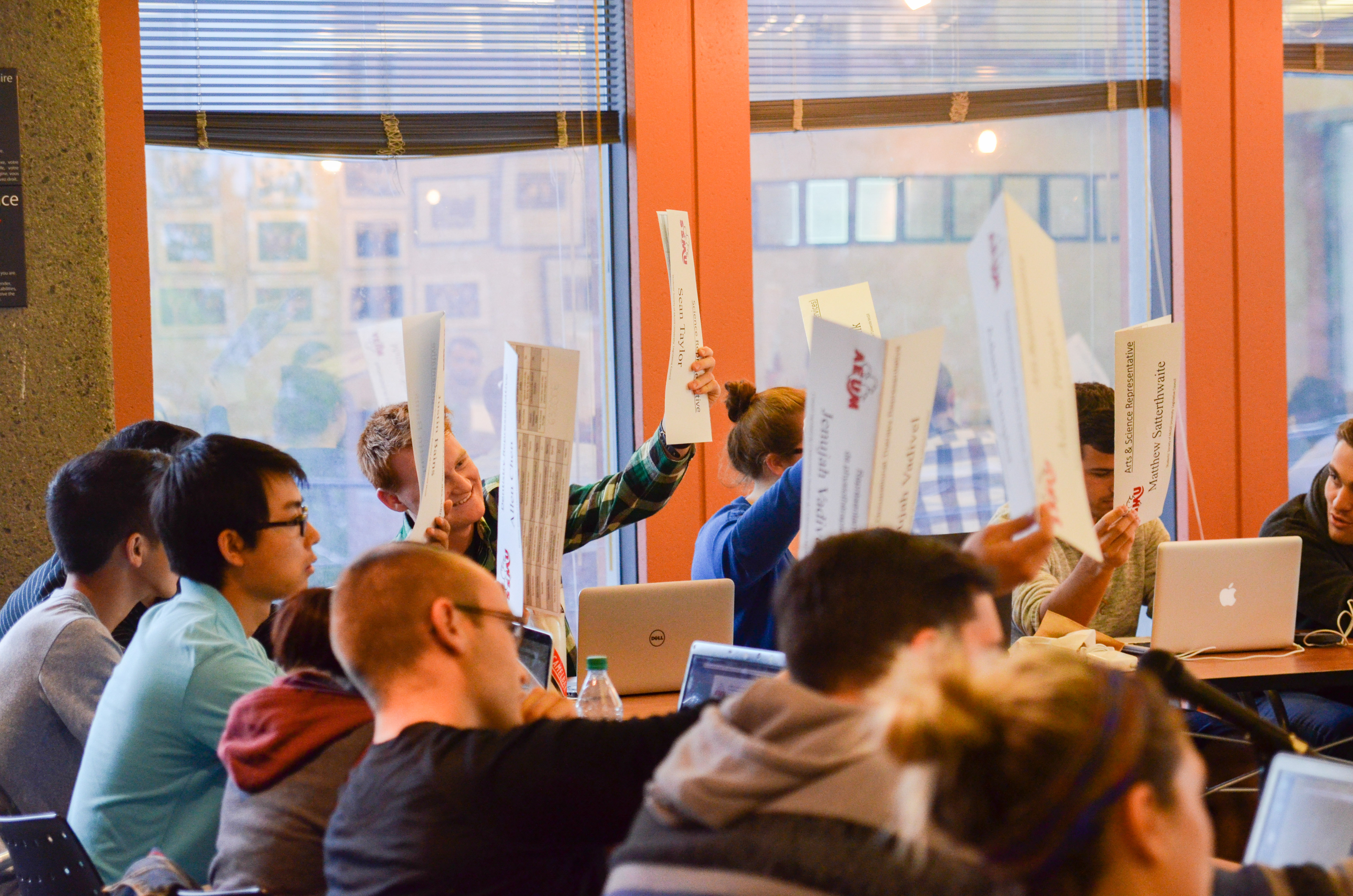 On October 1, the Legislative Council of the Students’ Society of McGill University (SSMU) discussed the resignation of VP Internal Lola Baraldi and decided to hold by-elections. In addition, Council was presented with notices of motion, one on the adoption of a climate change policy, and three on potential referendum questions.

VP Internal Lola Baraldi resigned from her position on October 1.

Council decided to hold by-elections to fill the now vacant position, the nomination period for which is October 9 to 30, with the possibility of being extended until November 2.

The new VP Internal’s mandate will start on January 1. Speaking to Council, VP Clubs & Services Kimber Bialik noted that this was to ensure that the position was accessible to all members of SSMU, given that most students have already signed up for full courseloads.

Speaking at Council, President Kareem Ibrahim stated that Baraldi left the position due to personal reasons. Ibrahim also explained that the tasks of the VP Internal will now be divided among the remaining executives and permanent staff members of SSMU.

VP External Emily Boytinck said, “The executive portfolios are really different, so it was a very interesting split. I don’t think there has ever been a VP External who has planned 4 Floors. […] I mean, we all are very aware of what this will entail for the rest of this semester.”

In an interview with The Daily, Ibrahim expressed that this will be “a very overwhelming year.”

“We all felt that we had just the right experiences necessary to really excel in these positions […] and that was already derailed significantly due to the absence of the General Manager, and now that challenge has increased significantly,” Ibrahim said.

Statement on the Interim Senior Director of Student Services

On September 25, Deputy Provost (Student Life and Learning) Ollivier Dyens announced the appointment of a new interim Senior Director of Student Services for the 2015-16 academic year following the departure of the former Senior Director in May.

In a joint statement, SSMU, PGSS, MCSS, and MCGSS voiced their “strong disapproval for the lack of consultation that occurred in making this decision.”

“We view this decision as part of a greater, historical trend of the University failing to consult and value the student voice when making changes that greatly impact our experience at McGill,” the statement notes.

A motion to endorse the joint statement was passed by a 92 per cent majority, without debate.

During the voting procedures on the motion mentioned above, Medicine Senator David Benrimoh expressed concerns about the new digital voting system used by Council.

According to this new system, councillors vote using clickers, as opposed to raising placards. According to Benrimoh, the system was changed to avoid situations “where people might have felt uncomfortable making their vote known, because there were some very strong personalities on Council.” This may have resulted in more people abstaining on motions they might have voted against.

However, Benrimoh expressed concern that this was an untransparent way of voting, as each councillor’s choice was not immediately available to the audience sitting in the gallery, which included members of the press. In an interview with The Daily, Benrimoh said, “The reason that we have these meetings open to the public is that, that way, people can come and see their representatives in action. Part of that action is voting.”

Boytinck brought up a notice of motion regarding the adoption of a climate change policy. An initial proposal for the policy was brought up at Council last year on April 9 by the then VP

External Amina Moustaqim-Barrette, following another motion that was passed at the Fall 2014 General Assembly.

At the time, the councillors had decided to refer the proposal to a committee, which would revise the motion to make it appealing to a broader base of students before bringing it back to Council. Boytinck said that the committee ended up being just herself, although she met with other groups and representatives, including representatives from the Engineering Undergraduate Society (EUS).

Boytinck said, “I changed a lot of [the proposal]. I wanted to focus on a couple of different things. It still has a very heavy focus on climate justice, which I think is super important. But it also talks more specifically on climate change, on reducing greenhouse gas emissions, and how we can partner with different groups to bring forth more sustainable solutions.”

Among the things she removed from the new proposal, Boytinck included a potential ban on all fossil fuel companies from the Shatner building.

The motion to approve the proposal will be brought up at the next Council meeting.