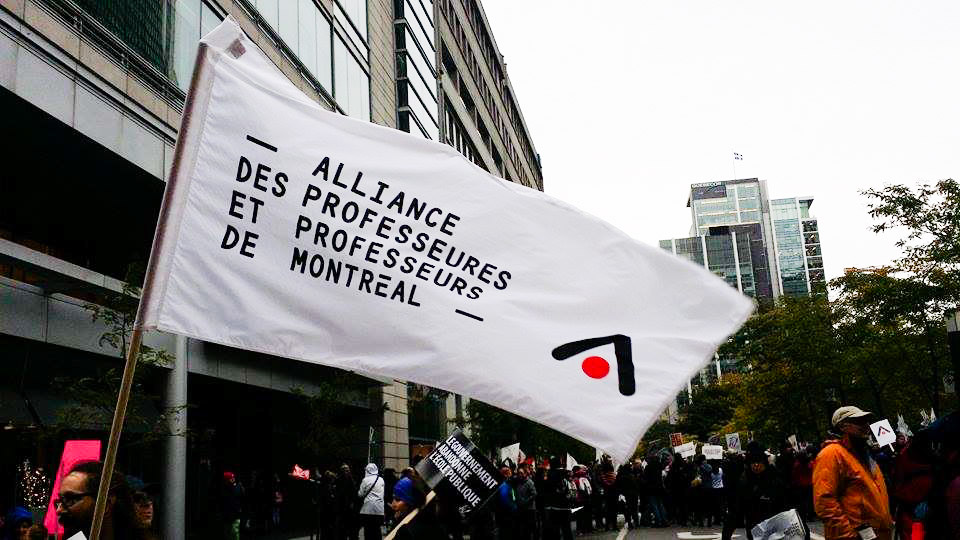 Around 15 McGill and Concordia students congregated at the Roddick Gates on September 30 to stand in solidarity with Quebec’s French-language teachers who are striking to protest the state of negotiations with the provincial government. The one-day strike was organized by the Fédération autonome de l’enseignement (FAE), which represents approximately 34,000 French-language teachers.

While many teachers voted to strike, some are also opting to work 32-hour weeks, with no extracurricular activities. Approximately 275,000 students were affected by the strike.

Demonstrators carried flags from their respective unions and banners with phrases such as “Your decision affects my future,” and “The government is abandoning public schools.” FAE President Sylvain Mallette also made a speech at the demonstration.

The crowd marched from 12 p.m. to 3 p.m., beating drums, and blowing on whistles and horns, and singing chants such as “We will not lower our eyes. We will not bend our backs. We will protect public schools.” The Service de police de la Ville de Montréal (SPVM) was also present at the strike and escorted the marchers.

Protesters aimed to pressure the government to renew the teachers’ collective bargaining agreement, but many demonstrators also attended to take a stand against austerity more broadly. Students’ Society of McGill University (SSMU) VP External and organizer of the McGill-Concordia contingent Emily Boytinck said, “Austerity isn’t something that we talk about a lot at McGill, and these demonstrations show the real impact of austerity and where it’s really hitting – it’s very much hitting primary education. With the new legislation, teachers can’t work longer than certain hours per week, extracurricular activities are cut, and class sizes are becoming larger and larger.”

Martin Bibeau, a member of the Alliance des professeures et professeurs de Montréal, told The Daily that the budget cuts compromise the quality of education in order to fulfill other government agendas.

“The government actually de-invested in public schools, cut the taxes, raised the number of students in classrooms, and removed services for students with difficulties. […] We are no longer able to educate the children and instruct them, and to offer a quality public school. Actually, for the government, their priority is austerity and to arrive at a deficit of zero. They want to do that at all costs, and by compromising and sacrificing [the] future of our youth,” said Bibeau. The new government proposals include increasing the work week from 32 to 35 hours, as well as increasing class sizes.

“The government has made it very clear that it doesn’t take education seriously. Teachers do.”

Marie-France Lacombe, a teacher and member of FAE said, “The government wants to give us more students in class, they want to cut our payment […] and they want us to do more hours by week. They don’t give us the support to help students. […] But we can’t do everything. […] We are there to teach them, but when we have every kind of struggle, we can’t teach.”

Jonathan Turcotte Summers, a Concordia Masters student in educational studies, voiced students’ concerns about the Quebec government’s position on education. “The government has made it very clear that it doesn’t take education seriously. Teachers do. Unfortunately, teachers are in a position where they have to take increasingly drastic measures, but that’s the position that the government has put them in,” said Summers.

Summers further noted that the impacts of austerity measures are not confined to education, but extend to other social programs as well. “The government is cutting from education, cutting from healthcare, cutting from all these public services that people really depend on. Especially low income people who are in difficult positions.”

“Ultimately, teachers working conditions are students learning conditions, so students [standing in solidarity with teachers] are acting in the best interest of not only themselves but [other] students and parents. I think the student role is to forge alliances, to show solidarity, and forge relationships because all of these struggles are interrelated,” commented Summers. “We may not see it because we focus on our individual struggles, but we need to form ties between teachers and students and workers and the unemployed […] and realize that it’s one big struggle and that we need to work together on this.”

Carlotta Esposito, a U0 Arts student attending the strike, emphasized the importance of student support. “I think as youth, we have a lot of voice. I think we have more voice than we realize, especially in the era that we’re living in. […] Teachers are striking, risking their jobs for us, so I think students can really make a change with this, whether it’s a big change or a little change, it’s worth a shot,” said Esposito.