Parents and students come out to “protect public schools” 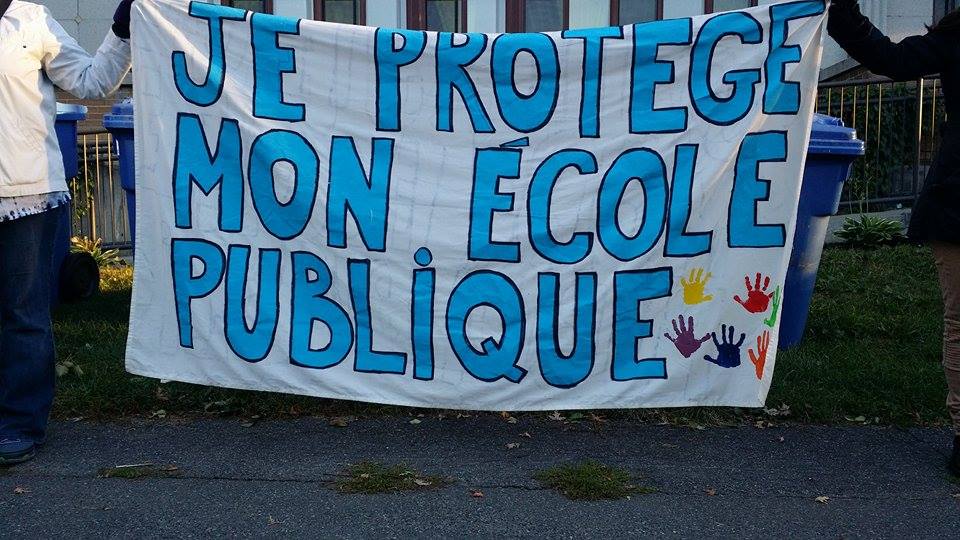 On the morning of October 1, over 150 parents, children, teachers, and staff members gathered in front of Notre-Dame-de-la-Garde, a primary school in Verdun, to denounce the provincial government’s budget cuts to the education sector.

A teacher at Notre-Dame-de-la-Garde, who wished to remain anonymous, told The Daily about the ways in which the increase in class sizes and the lack of support for students with special needs in the provincial government’s plans will affect teachers’ work conditions.

“Sometimes, it’s very hard to do what we do, especially if they keep increasing our class sizes, you can’t spend that much time with each kid.”

“We’re getting lots of services taken away from us. The government wants to propose [more cuts], but there’s already a few cuts happening. […] They’re talking about cutting teachers who help kids with difficulties, who [have] problems. […] Their jobs don’t necessarily get cut completely, but are getting dramatically reduced, so they can’t do their jobs like before,” the teacher said.

She continued, “Sometimes, it’s very hard to do what we do, especially if they keep increasing our class sizes, you can’t spend that much time with each kid […]. This [demonstration] is to protect public schools, to put money into it, and also appreciate what we do. ”

“Teachers […] also [have] to manage all those heavy cases that we don’t have the resources to address otherwise,” said Silvie Bacon, a parent participating in the demonstration, in an interview with The Daily.

The teacher, who was also present at the strike demonstration organized by the Fédération autonome de l’enseignement (FAE) teachers’ union on September 30, noted the success of the strike and the importance of speaking up.

“The strike was fantastic. It was very good, there were a lot of us. […] They were saying around 20,000 [people were present]. It was so that our voices can be heard. […] I have the impression we are not being heard. What we do is important, schools are important, we teach people to read and write, and if we have too many cuts in that, we can’t do our jobs properly. [The strike] was a way of saying, listen to us, we have something to say.”

“There are two things happening. There are [the] teachers, who are doing the strike […] and there are also the parents [who] are just against all the cuts that are happening right now. […] So [there are] two different kinds of fights. Of course, [both fights concern] all the kids. […] Both groups are supporting each other,” Savoie said.

Savoie also argued that it was a positive thing for children to be involved in the solidarity movement. “The kids can see that ‘Yes, it is possible to talk to those people that are on the top of the country.’ That’s the way for us to do it.”