Our myths, our country 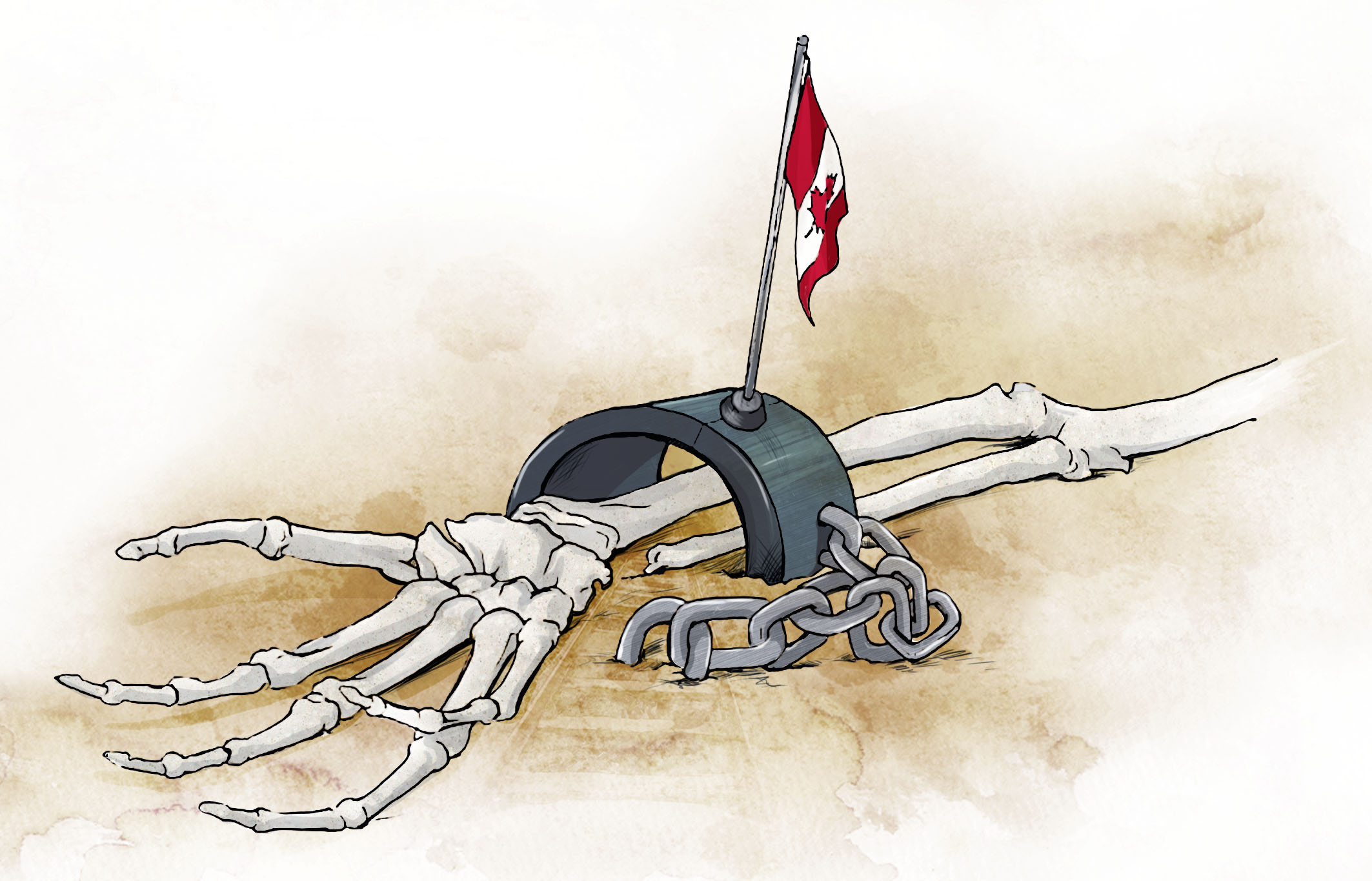 Human beings were enslaved in Canada. I just have to say it bluntly, because most Canadians either forget, ignore, or simply do not know that this took place. Canadians get lost in seductive legends like the Underground Railroad and the ‘rescuing’ of Black loyalists from the American Revolution, and all the enticing and comforting rhetorical power that comes with them. We need to come to terms with the reality of what Canada is – a country whose national consciousness has managed to erase the fact that over some 200 years, the lives and labour of thousands of Indigenous and Black people were stolen by white settlers.

This national erasure means many things. For one, it means that we forget the real experiences of enslavement as well as the practical realities of how slavery operated in Canada. However, it also means that we must pull back the curtain on our tendency to weave artificial myths about who we are as a nation.

One such myth is that slavery in Canada was “kinder and gentler” than in other parts of the world. To debunk this, it is useful to recall the story of Marie-Joseph Angélique, an enslaved woman in Montreal.

With a burning city at her back and flames lighting up the night sky, Angélique ran down cobblestone streets for her life and freedom on an April night in 1734 – though, like many fugitive slaves, she was quickly caught. Accused of starting a fire in her mistress’s home that spread to 45 other houses, she was promptly jailed and repeatedly tortured until she ultimately confessed to the act under duress. A court judgement sealed her fate:

“She shall make amends naked in her shirt, with a rope about her neck, holding a burning torch in front of the main entrance to the parish church of the city of Montreal. […] There, bareheaded and kneeling, shall declare that she maliciously set and caused the said fire for which she grievously repents and begs forgiveness from God, after which she shall have her hand cut off and raised on a post planted in front of said church, and then be conducted to the public square, to be attached to the post with an iron chain and burned alive, her body reduced to ashes and scattered to the winds.”

Though perhaps an exceptional case, this historical moment represents the very core of Canadian slavery: a process of colonial white domination, rooted in a voracious capitalist greed, seeking constantly to dehumanize and commodify the ‘other,’ while premised always on the implied threat of violence or its actual use.

This is what nearly 4,200 slaves in Canada experienced – a figure which, according to historian Marcel Trudel, almost certainly underestimates the true number of enslaved people. Mid-17th century settlers first argued for the ownership of slaves in Lower Canada for agricultural production, domestic service, and home defence, which the French monarchy recognized in 1689 by royal decree. Though a plantation economy never developed in Canada, chiefly due to climate, the lives and experiences of enslaved peoples were profoundly similar to their counterparts around the transatlantic world.

The French Code noir of 1685, the comprehensive slave law of the French Caribbean, was informally applied in Canada by shaping local practices related to punishment and legal status. After the 1689 royal decree, the first Canadian slave ordinance of 1709, an enslaved person in Canada, such as any one of the 1,525 in Montreal, was considered to be personal property. They, just like an enslaved individual from Barbados, Haiti, or the Thirteen Colonies, could be bought and sold at public auctions in Montreal and Quebec City, serve as security for debts, be loaned or rented through contracts, and inherited through wills and estates. Through the cold, ruthless and abstract fiction of the law, human beings were reduced to “movable property.” Charmaine Nelson, a scholar of the transatlantic slave trade and Mcgill professor, explained in our interview that “a slave was essentially like a table or any other moveable personal property. The law not only made it so it was actually impossible for a slaveowner to rape their slave – because one cannot rape property – but incentivized rape and sexual exploitation, given that any children born to an enslaved female were themselves slaves regardless of the race or status of the father.”

Demographically, slavery in Canada involved more Indigenous people than Black people – a full 65 per cent of all enslaved, according to Trudel – who hailed mainly from the Mississippi valley trade routes, but also from the Great Lakes, the western territories beyond Lake Superior, and the northern territories. Many were from the Pawnee nation near Kansas and Missouri, which over time inspired “Panis,” a catch-all term for enslaved Indigenous people in Canada. Canadian colonization was not simply a process of appropriating Indigenous land and violently displacing peoples, but also of exploiting Indigenous people’s bodies and their labour.

To my knowledge, no physical commemoration of these facts exists. Instead, a nondescript government building and a public square in Old Montreal now bear the name of Place d’Youville. Longueuil is the name of a suburb on Montreal’s south shore. Charles-LeMoyne is a hospital, and McGill is a university, which, both insultingly and defiantly, insists on placing the statue of its slave-owning founder at its entrance for all to see.

Still, Canada has many other difficult histories. The internment of German and Japanese people; the Chinese head tax and the immigrants who toiled and died on the national railroad; the horror of residential schools; and the 1869 Métis Red River Rebellion are only some of the histories which directly confront, interrupt, and frustrate the adoption of commonly propagated Canadian tropes of a supposedly harmonious, multicultural, and peaceful nation. Like these moments, the history of slavery in Canada is erased and repressed from the popular consciousness.

What does this erasure mean as we approach 2017, the date upon which we are told to celebrate 150 years of Canada? I believe it means slave narratives and history must no longer be what Canadian poet George Elliott Clarke has properly called “a silently painful wound, an anthology of the unspeakable that cannot enter into our anthologies.”

The self-congratulating parades, celebrations, and public monuments will not reflect what Canada has been and where it should go, but our conversations can. To be of any use, these conversations and debates must go beyond blithe gesturing to ‘sad chapters of Canada’s past’ and must be more than an exercise in national myth-making. Perhaps by venturing instead into the uncertain terrain of uncomfortable truths can we truly wrestle with the historical injustices so foundational to this country. Perhaps it is only there, with all the unsteadiness that comes with bearing witness to the past, that we can imagine a new national project that truly respects everyone’s humanity.