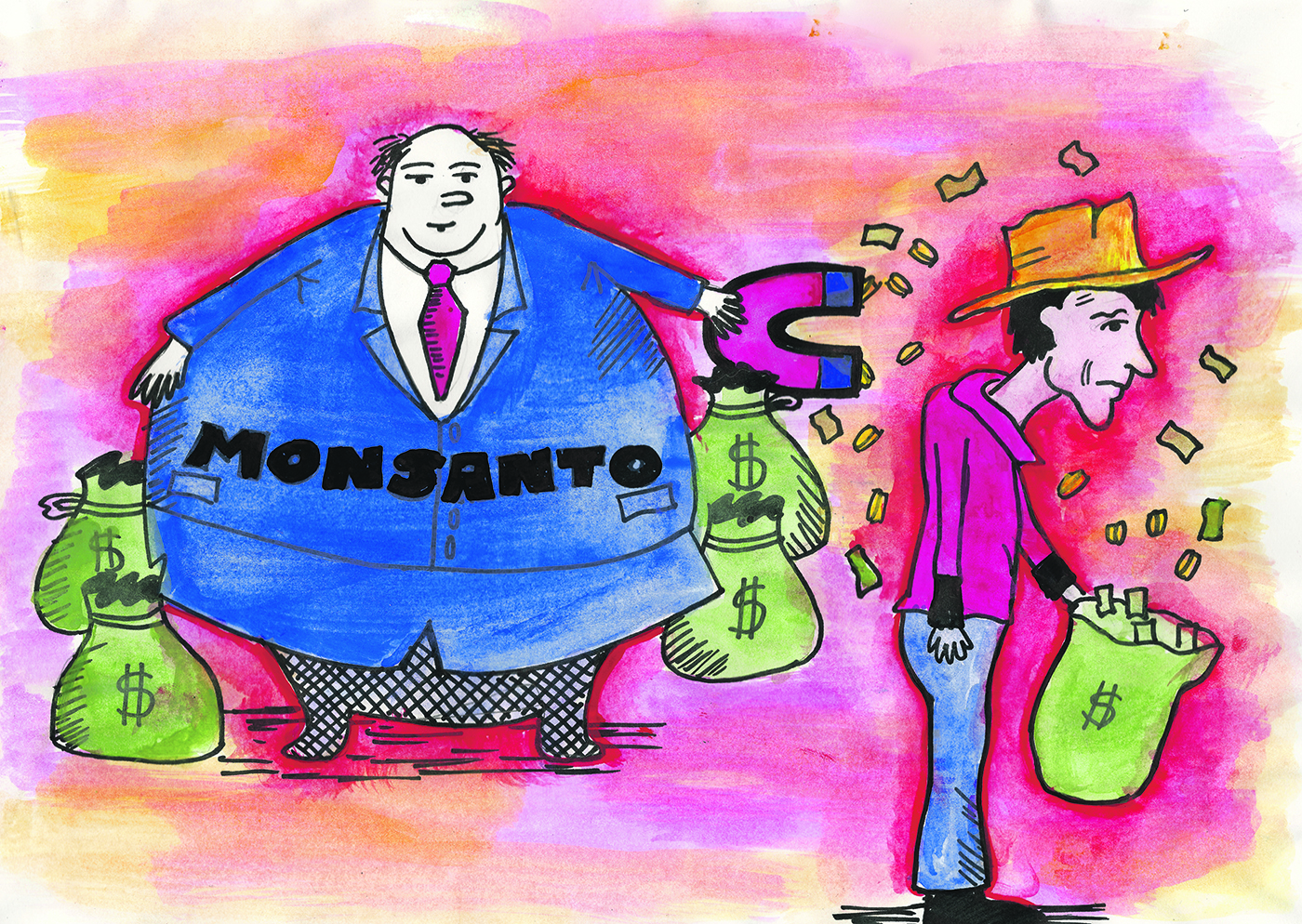 The controversy surrounding the production and distribution of genetically modified foods has increasingly become a public concern. The discourse on genetically modified organisms (GMOs) is centred heavily on debate between those who worry that with modification will come unhealthy side effects, and those who note that extensive studies on GMOs have shown little solid evidence that GMOs have any adverse effect on human health. This debate is important, but it also takes an ivory tower perspective of the situation, often overlooking environmental and other costs to farmers that coincide with the production of GMO foods. Large corporations are often accused of producing and distributing GMOs for the sole purpose of gaining maximum profits without any concern for public health or well-being. We need to analyze the complex interplay between science, large corporations, and society to get a better understanding of the realities of GMOs.

GMOs are plants or animals that have been genetically altered using DNA from different species of living organisms, bacteria, or viruses to get certain desired traits, including resistance to disease or tolerance of pesticides. When first introduced, GMOs were thought to be the end to world hunger, but there is a lot of debate over whether or not they have met these expectations. Scientists have been examining the safety of GMOs distributed by companies like Monsanto, the world’s largest seed company which accounts for a quarter of the world’s seed distribution. Monsanto has faced intense criticism and global protests from environmental activists, political figures, and local organic and non-organic farmers.

Environmental and social consequences of GMOs

There are several consequences of GMO production that extend beyond food consumption. Firstly, it has been found that growing GMOs increases the use of pesticides. A recent study performed at Pennsylvania State University indicates that the use of neonicotinoids, a pesticide known to be harmful to bees, increased dramatically between the years 2003 and 2011. It reports that in 2011, about 34 to 44 per cent of soybeans and 79 to 100 per cent of corn hectares had been treated with neonicotinoids. This study counters the myth that the advent of GMOs has lead to a decrease in pesticide use, an idea that had been previously supported by studies that do not take pesticide treatment of seeds into account.

The damning implications of the ever-declining bee population demonstrate why pesticide use should be taken very seriously. Several scientific studies report neonicotinoids as detrimental to bee health, and the fact that the growth of GMOs has not only failed to decrease pesticide use but has actually contributed to increasing use is a definite concern.

These laws demonstrate how the legal aspects of GMOs can help corporations extract more wealth from farmers and leave farmers with less power over their own crops.

So, what are the real-world impacts on farmers, especially small-scale farmers who struggle with agriculture’s growing, capitalist, economies-of-scale landscape? In the past year or so, farmers in Ghana have been protesting the Plant Breeders Bill, which would restrict their ability to swap, breed, and share seeds, giving the corporations who develop genetically modified seeds the rights to the seeds’ usage. In addition, Canada’s Plant Breeders’ Rights Act labels seeds as “intellectual property” that no longer belong to farmers, but to the owner of the seeds’ rights. If Apple sells you a computer, it belongs to you, and you can do whatever you please with it. Why should this not apply to seeds?

These laws demonstrate how the legal aspects of GMOs can help corporations extract more wealth from farmers and leave farmers with less power over their own crops. By losing the rights to their own seeds, farmers are liable to be sued. In 2014, Monsanto had sued over 140 farmers for planting its seed without permission, and settled more than 700 cases. GMO distribution is being seen as a ploy to financially benefit Monsanto at the expense of farmers, especially smaller growers. With this near monopoly on production of genetically modified seeds, GMO distribution can allow large companies to take advantage of small farmers in countries across the globe.

A promising technology for strengthening agriculture

Despite the harms of corporate control of GMOs, there are also advantages that come with having products that are more resilient and resistant to pests. Julia Freeman, a faculty lecturer at the McGill School of Environment (MSE), told The Daily in an email, “In India, for example, the cotton harvest of many farmers was being damaged from a pest called the bollworm [so] that they had very little to lose when the option of genetically engineered cotton came on the market.” The Hawaiian papaya industry was also almost entirely wiped out by ringspot virus, and genetic modification helped resolve the issue by allowing for a virus-resistant crop variation to be cultivated.

In addition to being more resilient, genetically modified foods are also often cheaper to produce because they can be modified to be high-yielding and mature faster than naturally grown produce. For example, golden rice is genetically modified to contain high levels of beta-carotene in order to compensate for vitamin A deficiency. Genetic alteration of rice to increase its vitamin A content has been successfully completed and used to combat vitamin A deficiency in countries around the globe.

Despite ongoing safety debates and conflicting research results on the consumption of genetically modified foods, there is a general scientific agreement that food from genetically modified crops is not inherently riskier to human health than conventional food. Repeated studies have found no threat to human health from GM ingredients, which are found in up to four-fifths of processed food in Canada and some 64 other countries.

“When the technology of inserting a transgene into a new plant was being developed, it raised a whole host of questions that tend to really bother [people,]” explained Freeman. She also pointed out that there were speculations on whether or not scientists were “transgressing a ‘natural’ – or religious, or some other foundational – boundary.”

“How should we navigate the unknown, unlikely, but potentially devastating impacts of the technology?” Freeman continued.

As far as the discussion on the health harms or benefits of GMOs, Freeman also addressed the fact that “it is not very helpful to talk so broadly about GMOs when you’re thinking about the possible risks and benefits of particular genetically engineered crops.” If we shift away from the GMO yes or no dichotomy, we can start to ask questions that are more focused and useful to science.

It is difficult to decipher the entire truth behind the science of GMOs because it requires one to sift through the overwhelming amount of conflicting information available.

We must ask ourselves, will typing in “Are GMOs harmful?” into a search engine result in immediate satisfaction? It is difficult to decipher the entire truth behind the science of GMOs because it requires one to sift through the overwhelming amount of conflicting information available. Some would prefer that genetically altered seeds never leave the laboratory, but this overlooks the potential benefits of the techology, such as decreasing food shortages and increasing vitamin content of our foods. On the other hand, corporations such as Monsanto also contribute to noise in the discussion, as an investigation by AlterNet indicated Monsanto had expressly solicited positive feedback on GMOs from academics.

What is clear is that ultimately, we cannot let manipulation by large corporations eclipse this scientific innovation. If we are to continue research on and usage of GMOs which do have a lot of potential, we must also keep corporations in check and make sure that the use of these technologies does not unfairly benefit them at the expense of small-scale growers.