The artist is absent 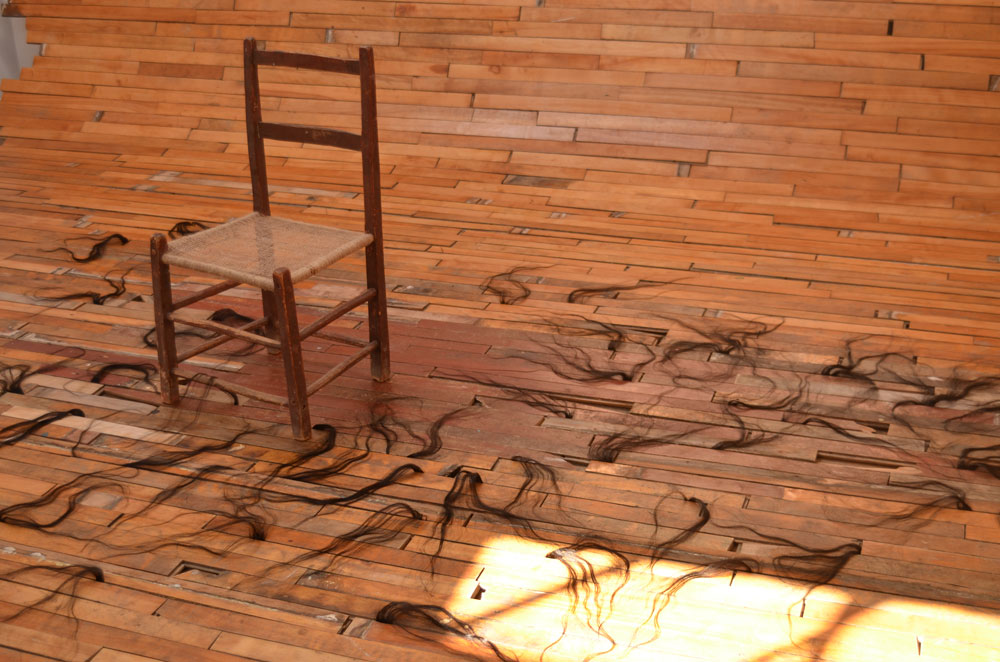 Anishinaabe artist Rebecca Belmore’s guest solo exhibit “Somewhere Else” at OBORO is the perfect relief to a diet of museum blockbusters. Seeing advertisements plastered all over the city, lining up to get in the door, then shuffling in with a crush of people, sweat dripping down your back, all to catch a swift glimpse of the art before the person next to you listening to their audio tour elbows in front you – this is the blockbuster exhibition. The blockbuster can leave you wanting something more substantive than the flash and accoutrements that typically accompany such shows. OBORO provides just that with “Somewhere Else.” Composed of one video installation and three sculptures, the total number of pieces may seem small, but each piece is a powerhouse experience that fills the space with the Lac Seul First Nation artist’s presence.

The first piece, a video installation also titled Somewhere Else (2015), is composed of four videos documenting past performance art pieces by the artist. Including these past performances creates context for the three physical installations in the exhibit, entitled Sever (2015), pakwâwi-mostos asiniy (2015), and Leeward (2015). These installations stand in for the artist’s own body – which has been an integral part of her artwork.

Somewhere Else is composed of shots of the artist’s seminal performances, Creation or Death: We Will Win (1991), Bury My Heart (2000), Vigil (2002), and Omaa (2014). Each of these performances employs the physicality of the artist’s body to convey the racism, violence, and colonialism Indigenous people have been subjected to, both in the past and in the present day. In her performance pieces, Belmore uses her body to create a space of active resistance. Each performance places the artist somewhere squarely in the public eye, forcing viewers to acknowledge the structural violence endemic to our society rarely acknowledged by political leaders and the public alike.

Leeward is a chilling response to the questions raised in Belmore’s 2002 performance Vigil. Vigil protested the lack of action for missing and murdered Indigenous women in Vancouver’s Downtown Eastside. In the performance, Belmore, clad in a red dress, nailed her clothing to a telephone pole and struggled to rip free. Leeward is similarly confrontational – a red shirt is nailed to a large pale tree trunk and leaned against the wall. The red shirt is a stark reminder to the viewer that the struggle for Indigenous women’s safety in Canada is far from over. The shirt is also a biting commentary on the failure of politicians, the police force, and the justice system to hold perpetrators accountable for missing and murdered Indigenous women.

The four pieces in Belmore’s exhibit “Somewhere Else” may centre on the artist’s absence, but they each bring plenty of presence to the gallery themselves. Each piece will stay in the minds of visitors long after they leave the space. Aside from the status of missing and murdered Indigenous women in Canada, Belmore tackles more aspects of her Indigenous experience in her pieces. This small lineup is worth checking out over the next blockbuster exhibit. With only four pieces, “Somewhere Else” packs more meaning in one room than blockbuster exhibits aspire to convey in entire exhibits.

“Somewhere Else” runs until October 17 at OBORO.