Textbook prices are too damn high 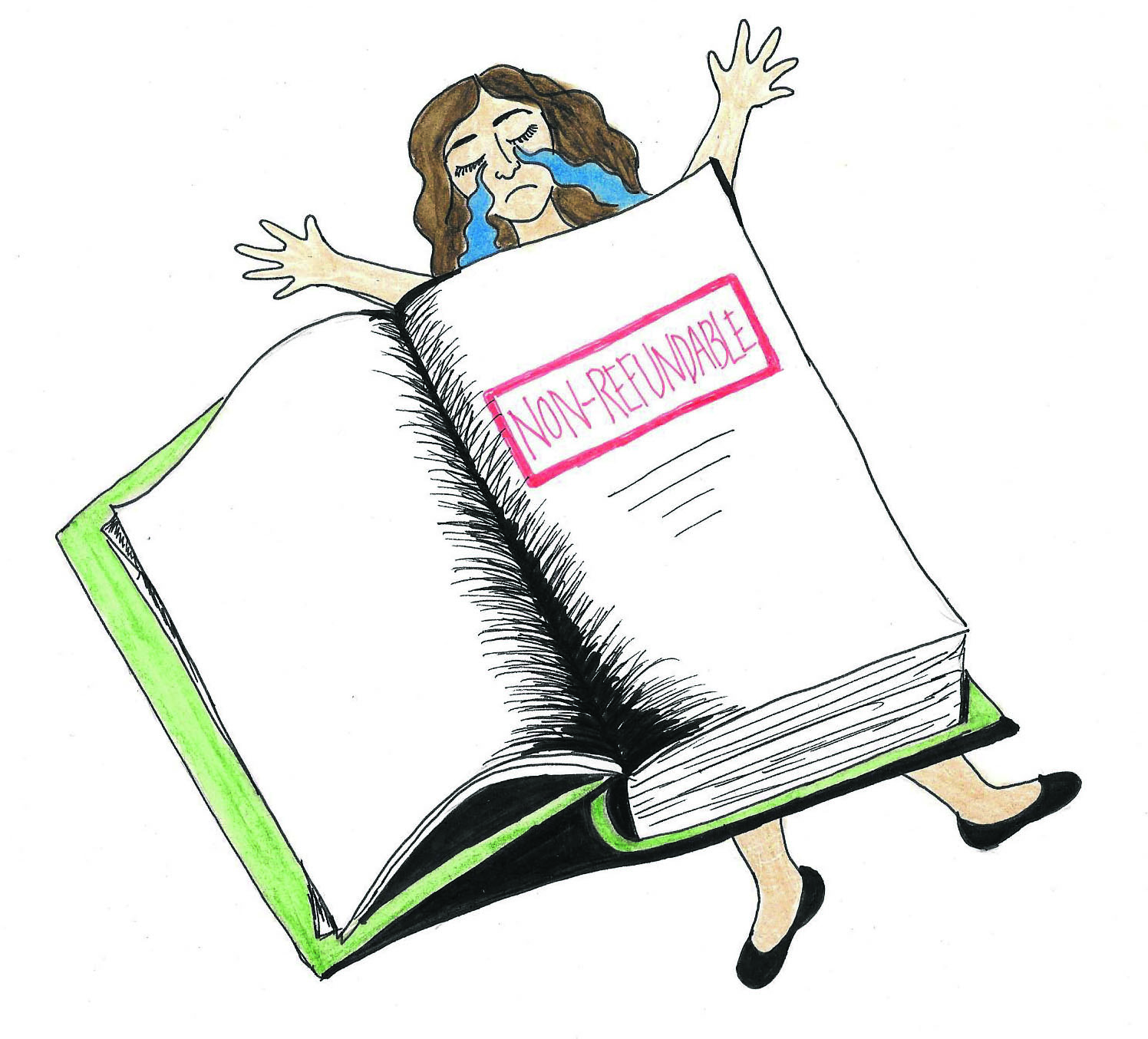 The beauty of my public high school, if there was any, was that it was largely all-inclusive. If you couldn’t afford a calculator, there was a way to borrow one. You could print from the school’s library at no cost. If you lived too far from school, the district provided a bus service or a public transit subsidy. Textbooks were provided, even if they were a little torn at the edges, and you only had to pay if you misplaced the book at the end of the year. When I came to McGill this year and found myself gawking at the prices in the bookstore, I felt like I had been living in a bubble – how could textbook costs be so high? Textbook prices have become a disproportionate part of the student budget, and McGill has done little to mitigate this problem.

According to the American Enterprise Institute, the average U.S. student will spend over $1,000 on textbooks in 2015 – that’s an 812 per cent increase since our parents went to school, and almost half of the cost of tuition for a Quebec resident. This problem is compounded for students at Canadian universities, thanks to regulations under the Copyright Act, under which Canadian publishers (including Canadian branches of foreign-owned multinational brands) have exclusive rights to import and distribute titles published abroad. This means they are allowed to charge a 10 per cent premium for American titles and a 15 per cent premium for titles from outside North America, usually from the UK, making a $100 book cost $110, and your five $100 books cost $550 – not to mention the profits bookstores make on top of this, the burden of which is then passed on to us students, in addition to our four- or five-figure tuitions.

Even more disturbing is that according to the National Association of College Stores, 77 cents on every dollar spent in the U.S. on textbooks go straight to publishers (which helps to explain the phenomenon of professors assigning textbooks they wrote, since authors only get about 12 cents on the dollar on average). However, while these professors may be getting ripped off by publishers, professors can also be part of the problem for students. A study by the University of Iowa found that the constant revisions to textbooks, one of the main drivers for increasing prices, are largely unnecessary despite the fact that many professors insist on assigning the most recent versions of a text.

Our University is failing to uphold its own principles by not doing its part to make basic academic materials financially accessible.

Students attempt to mitigate the high cost of textbooks in various ways, though a solution isn’t always easy to find. Some point to rental books as an option, but this isn’t available for all textbooks. For example, my Arabic textbooks, which I won’t need once I move to upper levels, would be great texts to rent and return at the end of the semester, but instead I was directed to the Paragraphe bookstore to purchase new copies. Further, rentals are only slightly less expensive than buying the new version – I suspect the steep rental fee is really just a monopoly issue.

There are coursepacks, which, to be fair, release us from some of the monopoly held by the five major textbook publishers in the world. Some coursepacks are available online, which are also available at a cheaper price, but this doesn’t help students who learn best from using paper materials and taking handwritten notes. This also doesn’t allow for students to resell the online coursepack to a student taking the class in the future – which is also hard with paper coursepacks when there are different professors for a class each year.

Online versions of textbooks in general can’t always be the answer, either. In my Russian literature class, for example, there are certain books that really can’t be easily found online, particularly as specific translations are required due to the nature of the course. So I understand, in this case, why these editions were chosen.

Textbooks are also available on reserve in the library, but if everyone relied on that service, there would have to be at least 500 copies of every book for every course taught in Leacock 132. There are interlibrary loans, but this can take time, and again, there are not enough copies to go around for everyone. The viability of these loans also relies on the idea that a book you need will be less in-demand at another university; and for courses with the most expensive books, like biology and psychology, what are the chances that Concordia and UQAM will have extra copies lying around? For students who learn best through active reading (writing and taking notes directly on what they are reading), library loans seriously restrict the quality of learning. Due to the unreliability of many of the above options, many student turn to illegal downloading for popular books, and I don’t blame them.

I know I’m lucky to be from a background that makes these prices an inconvenience rather than a total roadblock. But there are students at McGill and other universities across Canada, as well as other countries with huge price tags on education (I’m looking at you, America), for whom textbooks are the one extra cost that makes education inaccessible, if it wasn’t already. When professors assign specific editions of books, this restricts students from buying used copies. When online textbooks or coursepacks are your only affordable option, you can’t always resell them or buy them used from other students. This can lead to students struggling through courses for which they cannot afford the materials, or avoiding those altogether.

There needs to be an open dialogue between students, professors, and the University about what causes high textbook prices, and what can be done to mitigate them. Professors do have control over what they assign – if specific editions are truly necessary, then assign them, but when they aren’t (and please, professors, be realistic here), recommend multiple books or editions instead of just one. Professors should also try to take advantage of public domains and publicly accessible texts. The University should also prioritize the availability of shared resources in libraries on campus. Textbooks and coursepacks should be available on reserve when classes start, not several weeks later, and having more than a few copies would make the process easier for students and professors alike.

McGill states in its mission statement that it aims to advance learning by “offering the best possible education […] and by providing service to society.” McGill also lists its principles as responsibility, equity, and inclusiveness. As such, our University is failing to uphold its own principles by not doing its part to make basic academic materials financially accessible. If McGill really cares about equitable access to its supposedly prestigious educational experience, it must prioritize guidelines for professors who assign course materials and initiatives to lower the hurdle of exorbitant textbook prices for students.

Geneva Gleason is a U0 Arts student. To contact her, email geneva.gleason@mail.mcgill.ca.