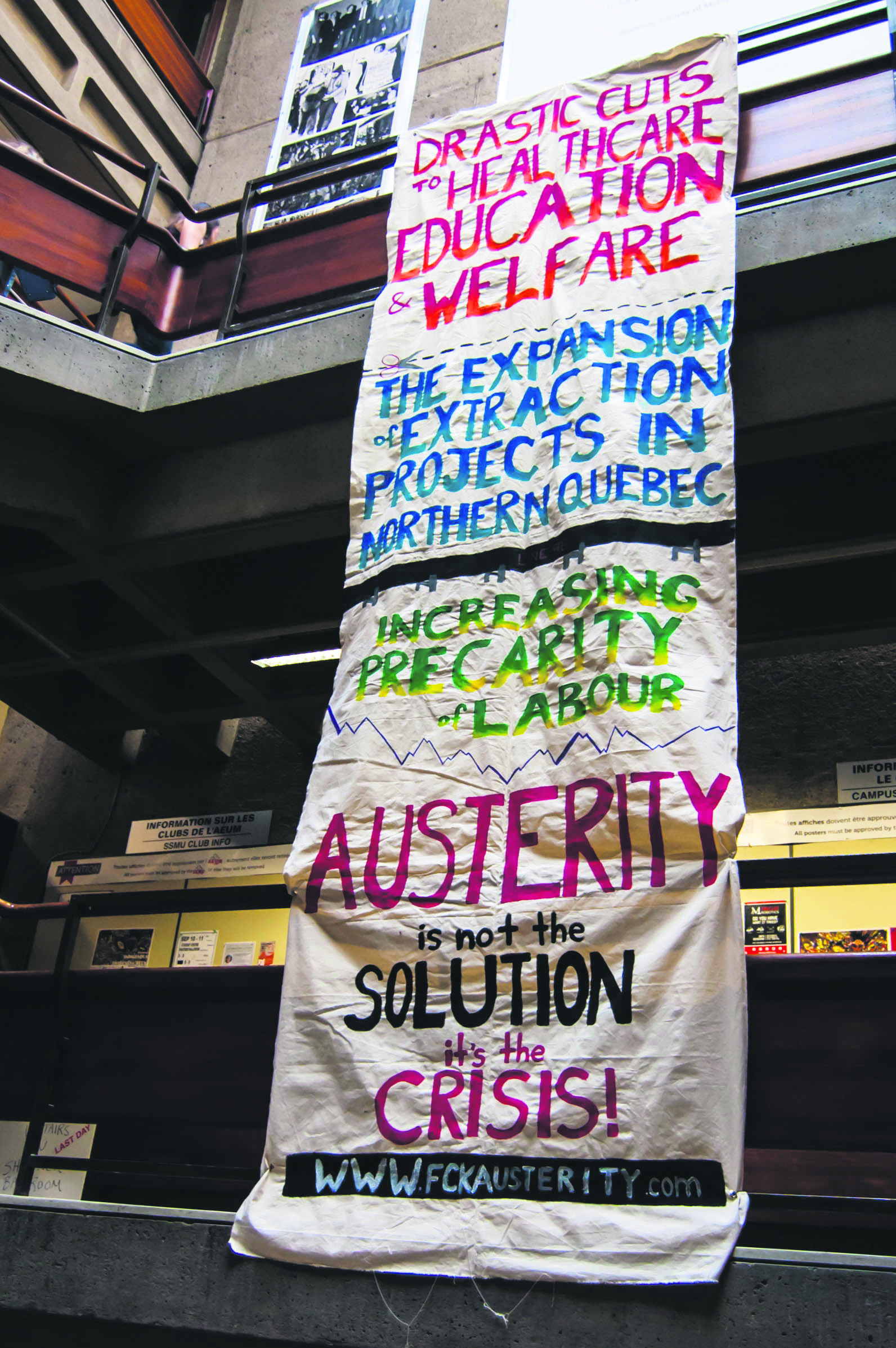 Between September 21 and 24, the Students’ Society of McGill University (SSMU) organized an anti-austerity week, holding various workshops and skillsharing events. In addition to the ones covered here, the events included various discussions on the history of mobilization in Quebec, a bike-powered film screening, and a presentation by CKUT on the importance of community radios.

How to organize a strike

“So You Want to Go on Strike: A Skillshare for Departmental Student Strikes at McGill,” was held on September 16. The workshop discussed the different skills required to stage a successful departmental strike, covering a variety of topics from organizing a general assembly, to dealing with unsympathetic professors.

In order to have a successful departmental strike, the facilitators explained, organizers must set up accessible general assemblies, deal with possible opposition from student executives or faculty, and effectively communicate with other students in the department. This means coordinating the distribution of flyers, posters, and other forms of communication to reach as many sympathetic students as possible.

The facilitators stressed the importance of solidarity throughout a strike, which includes having well-defined roles for every student during the strike, so no one feels overwhelmed. For instance, if planning to picket, organizers should know which students are comfortable with physical aggression when confronting other students or police officers.

The facilitators also pointed out that a successful strike needs to provide material and emotional support to the protesters. For example, during the Women’s and Sexual Diversity Studies Student Association (WSSA) strike in April of 2015, this meant booking a room with food and couches, where students could go to recover, calm down, and talk to a counsellor if necessary.
At the end of the discussion, the facilitators noted that ultimately the only way to gain these skills is to take part in a strike.

“Intro to Street Medic Training,” a first-aid workshop on medic training for demo safety, took place on September 16. The workshop gave an introduction to the basic skills necessary for dealing with first-aid situations specific to the context of demonstrations, such as washing out pepper spray from eyes, minimizing damage from tear gas, and treating shock and panic.

This workshop targeted those involved in demonstrations, but many of the skills and much of the information presented were broadly applicable to anybody who lives in downtown Montreal, where many politically charged events take place and where police employ tear gas to control demonstrations. For example, as tear gas is a volatile chemical weapon that does not discriminate between demonstrator, journalist, police, or civilian, it could be useful for all residents to know to wash themselves thoroughly after exposure, as oils in the skin can make the burning sensation worse.

The workshop also highlighted the distinctions in dealing with different chemical compounds. Pepper spray, unlike tear gas, is an oil – water will cause the chemical to spread and lead to intense pain. According to the workshop, the most effective way to treat pepper spray is to immediately rinse with Maalox (milk of magnesia, available in pharmacies), especially if eyes were exposed.

A central theme was the idea of consent in a medical context. The workshop emphasized that many of those needing medical attention at a demonstration may find themselves unable to receive help at hospitals for legal reasons, making it critical for street medics to respect the decision of a wounded person if they do not wish to seek medical attention at a hospital.

The workshop also discussed post-demonstration care, especially after a traumatic or violent incident, and stressed the long-term commitment involved. It was emphasized that many of those involved in demonstrations are from marginalized communities, often unable to seek formal health services for legal reasons. As such, it was said that giving protesters access to the care and support networks they need from their peers remains crucial.

Lawson defined casualization as “the process wherein full-time workers” – those who receive benefits such as long-term contracts with higher wages, healthcare, and pension – “are replaced by part-time, casual workers who do the same work for less.” As a result, Lawson said, “constant anxiety [over job security] induces passivity.”

Swain argued that casualization is driven largely by austerity, saying that “all of the proponents of austerity are profiting from the confusion of household debt with governmental debt.” Swain also depicted government debt as an “entirely necessary” aspect of capitalist economy, unlike household debt, arguing that “the emphasis on paying back [government debt] is purely ideological.”

“Capitalism binds people through indebtedness,” Swain said, especially students who, as job opportunities appear more scarce, go into thousands of dollars of debt, working unpaid internships. Through strikes and organized movements, students attempt to resist austerity and the debt it incurs. However, students are not considered workers under Quebec law, and are therefore excluded from unions. Groups who may refer to themselves as unions representing the interests of students – like SSMU – are not, in fact, classified as such, and have little to no collective agreement or bargaining power. Lawson proposed that “undergraduate work should be valorized in the economy,” and that students are workers and deserve pay and unionizing power as such.

“Not only are [undergraduates] crucial to the university just by being here, [they] are also actively producing labour in [the] classrooms,” stated Lawson. The workshop also explored the intersectional history of unionization. Both Swain and Lawson proposed that it is and has always been in the best interest of the capitalist state to exclude certain groups in the history of labour and unionization. Although pivotal to the history of labour in Canada, Black and Indigenous people are often discounted and ignored in history as the first unionizing labour forces. Swain said, “Discounting the work of oppressed peoples perpetuates a white supremacist and patriarchal society.”

As the workshop drew to a close, facilitators and participants discussed ways to disengage from such a system, suggesting potential alternatives where both the exploitation of workers and the resulting labour unions would be non-existent. Swain emphasized that “collective mobilizing is the most powerful source of social change.” In a direct challenge to the assumption that millennials cannot stand up against the rise of austerity and casualization, she stated, “We are told precarious work is the work of the future. I am not saying we should be looking to the [pre-industrial] past. […] I am suggesting this rhetoric is a lie.”