Slurp up some science 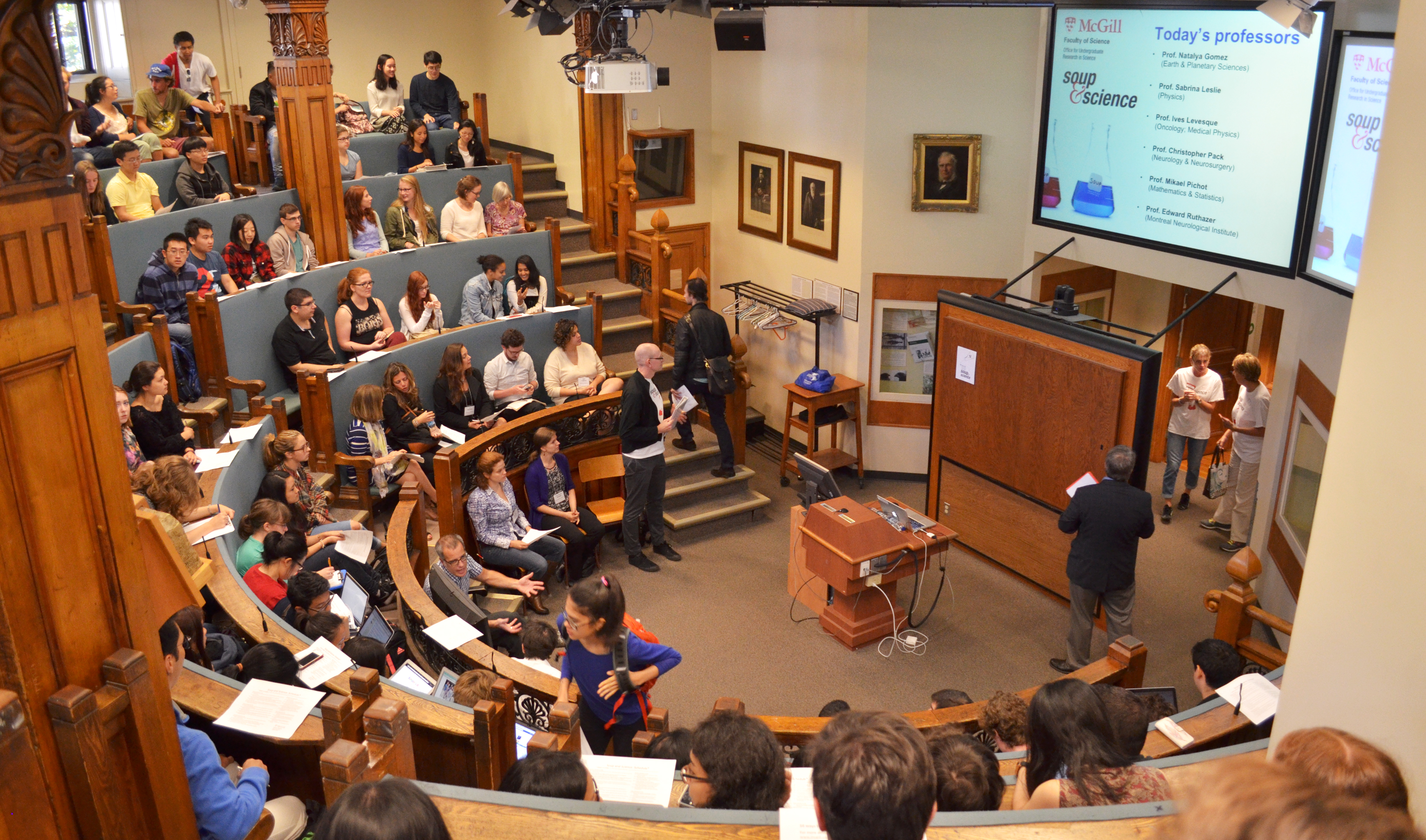 If you’re looking to get involved in the research scene here at McGill, grab your spoons, put on your thinking caps, and listen up. The 20th edition of Soup and Science, a week-long lunch event aimed at introducing students to professors, will be taking place from September 21 to 25. Lunches will be held daily at 11:30 a.m. in the Redpath Museum and will feature five to six three-minute presentations from professors introducing their areas of research.

The event will exhibit the work of professors from the Faculty of Science as well as affiliated interdisciplinary departments. This year’s tentative lineup of professors includes Joelle Pineau, a computer science professor who will discuss her research on artificial intelligence and machine learning. Edward Ruthazer of the Montreal Neurological Institute, whose lab explores how one’s experiences early in life affect brain activity, will also explain his work.

Victor Chisholm, the undergraduate research officer for the Faculty of Science, has been involved with organizing Soup and Science since its inception in 2006. Chisholm told The Daily the event is important because it offers people the chance to learn about the broad range of research happening at McGill. “It allows us to showcase who we are and introduce students to the opportunities that are available to them during their degree,” Chisholm said.

“It’s one of the rare occasions that I had to interact with people that were truly outside of my department and were undergraduates.”

Soup and Science also attempts to create a space where students can network with professors. In the past, Chisholm noted, several students told him they “made connections at Soup and Science that have translated into research opportunities.”

At last fall’s edition of Soup and Science, undergraduate students gave positive feedback about the event, saying it breaks down the student-professor barrier felt so strongly in introductory courses. However, students have often noted the difficulty of procuring a spot; it is usually necessary to arrive at the event early to guarantee admission.

Sofia Lin, a U3 Psychology student, also noted that when she went to Soup and Science in her first year, the research discussed was a bit too technical for her to understand, and as a result she did not feel like she knew enough to start a conversation with the professors. “Maybe because it was my first year, I guess, so I didn’t know what kind of question I should ask,” Lin said.

“It’s a good experience, but in terms of actually talking to [professors] I remember there were so many people, I didn’t actually get to talk to someone,” she added.

Janine Mauzeroll, a chemistry professor at McGill who does research on electrochemistry and the corrosion of various materials, spoke positively about Soup and Science, but noted it could do a better job of introducing undergraduates to research opportunities. The event doesn’t really give students an idea of “how to better get a job in research for the summer or during the semester or something like that,” Mauzeroll said.

“I see [Soup and Science] more as a nice meet-and-greet [with] networking capabilities,” Mauzeroll told The Daily.

However, the event did allow Mauzeroll to meet students from a variety of faculties, whom she would never otherwise have met, outside of introductory-level classes, which have hundreds of students and tend to be impersonal. “It’s one of the rare occasions that I had to interact with people that were truly outside of my department and were undergraduates,” said Mauzeroll.

Ways for new students to try out research

Here are some options available to you for getting involved in research. Keep these in mind as you wander over to Soup and Science.

1. Undergraduate research (Science classes with course code 396): These courses offer students a chance to gain experience in a variety of possible areas. Since you’re not limited to doing these courses through your department, you can explore other areas of interest you might have. Worth three credits, the projects are most often assigned by a supervisor, whom you must find and contact in advance of the Add/Drop deadline.

2. Volunteering in a laboratory: If you like a professor’s research, you can always contact them and ask to casually help out with a project. Make sure to update your resume, and read up on their research before you talk to them to see if it interests you and to show them your motivation to get involved.

3. Emailing profs for research assistant positions: Taking initiative works! It’s often necessary to reach out to professors in order to find interesting research opportunities. Look at what is available on McGill Career Planning Services’ research opportunities database and take note of the professor’s preferred mode of contact, and you might just find some golden projects to work on.

4. Research awards: Of course, you can always apply for research awards in order to take on a project. Awards such as Natural Sciences and Engineering Research Council of Canada Undergraduate Student Research Awards (NSERC USRA) and Science Undergraduate Research Awards (SURA) are quite competitive, so this will require you to take time on your application and to find a supervisor well in advance. Most such projects are done at McGill over the summer.

Click to enlarge: Here is a selection of researchers to be featured throughout the week!