Making waves in the biodiesel industry

Animal fat waste could be a feasible source of renewable energy 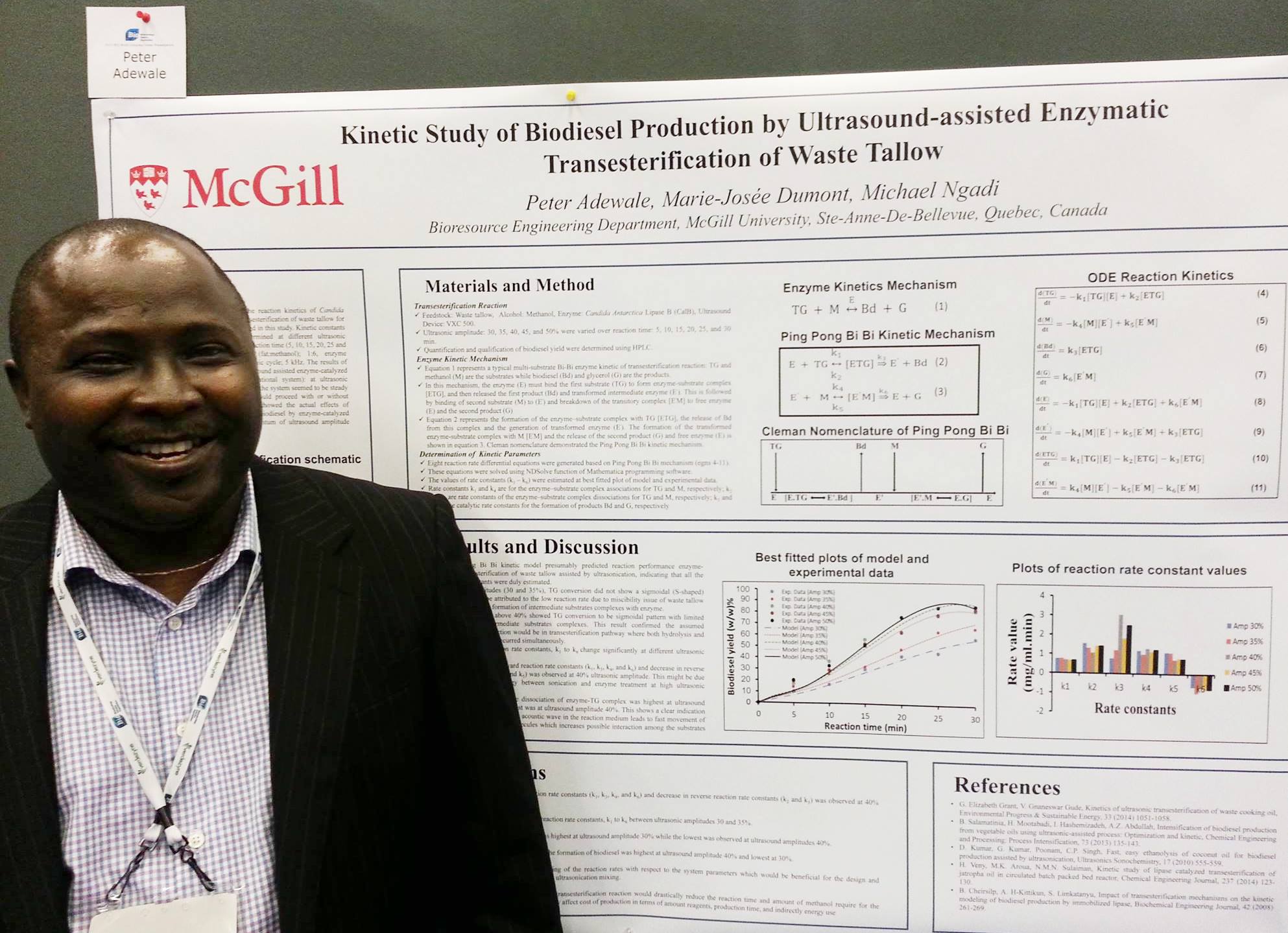 The use of bubbles might be a key step forward in biodiesel production. Peter Adewale, a PhD student in the Bioresource Engineering Department at McGill, has devised a method to shorten the production time of biodiesel to twenty minutes, a significant drop from previously reported production times ranging from 24 to 96 hours. The biodiesel was made from inedible tallow – a type of animal fat – using enzymes as a catalyst, and the bursting of bubbles formed by ultrasonic waves, a process known as ultrasonic mixing, to speed up the process.

While biodiesel generates significantly less environmental pollution than fossil fuels do, it has been widely disregarded as a viable alternative fuel because it is most often produced from edible crops; common sources for biodiesel include canola oil and soybean oil.

Adewale tells The Daily,  “When you are using edible canola oil, you are competing with human [consumption]. Down the road, it will lead to either high cost or scarcity.” To become a more viable alternative fuel, biodiesel would need to be made from non-edible sources such as animal fat waste, generated by the meat processing industry and tanneries.

“When you are using edible canola oil, you are competing with human [consumption]. Down the road, it will lead to either high cost or scarcity.”

Biodiesel can be made from either vegetable oil or animal fat. The conversion process takes time, ranging between one hour and a few days, depending on a variety of factors, such as the type of catalyst and mixing apparatus used. To get the shortest production times, companies use alkaline catalysts, because they speed up the reaction more than acid- or enzyme-based catalysts.

Originally, Adewale was interested in creating models of the interactions of methanol and animal fat to see how those two reagents mix with each other to produce biodiesel. According to Adewale, after spending two years trying to learn how to use the modelling software COMSOL, he was told by the software’s producers that what he was trying to do was simply not possible. The level of modelling needed to simulate the particles mixing was too complicated, given the software that was available at the time. “Eventually, I had to drop the idea,” Adewale explains.

And so, two years into what he had hoped would be a three year PhD, Adewale decided to try an experimental approach, since dropping his theoretical modelling approach. He started by studying the characteristics – like the free fatty acid content and melting points – of different animal fats, such as tallow, lard, choice white grease, and yellow grease, all of which could be used to make biodiesel.

Adewale noticed tallow had a high saturated fat content which made it semisolid at room temperature, unlike the others, which were mostly liquid. Curious as to how this would affect the ultrasound mixing, he chose to use waste tallow as the biodiesel source for his experiment. 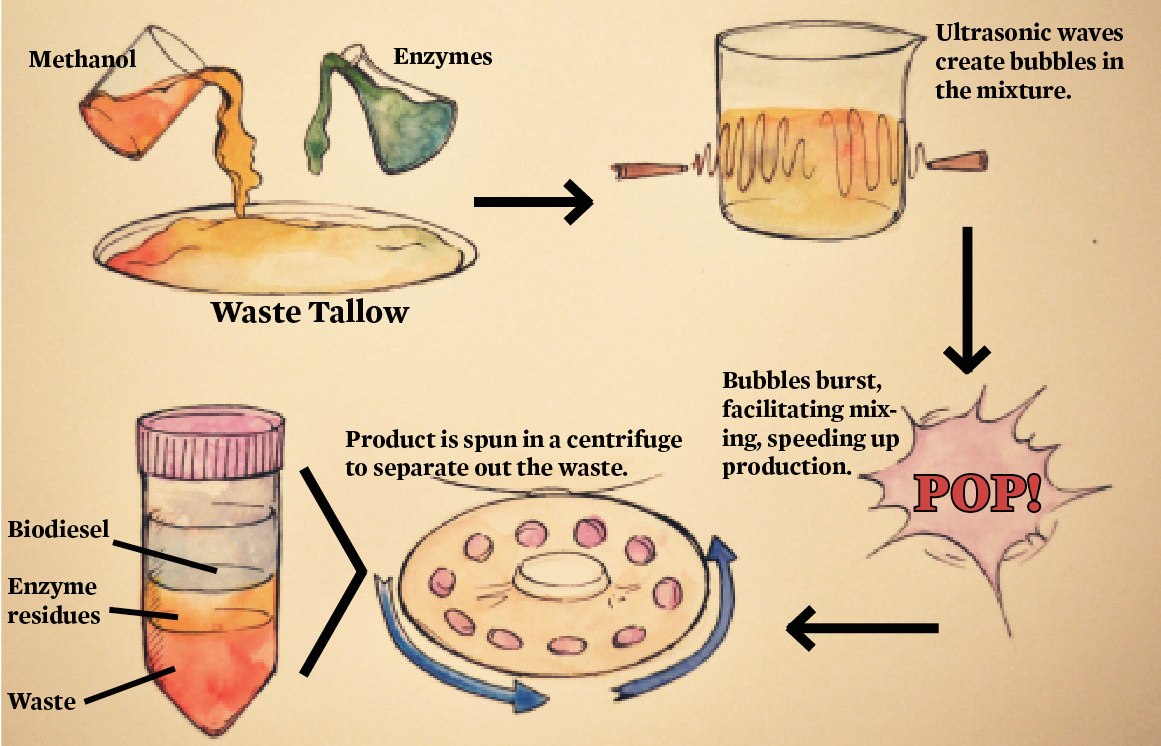 The importance of time in biodiesel production

The main challenge in using animal fat waste to produce biodiesel lies in the time it takes to make it. Animal fat waste, such as tallow, contains high amounts of free fatty acids. This poses a problem, because, as Adewale explains, “Free fatty acid is one of the major disadvantages of alkaline transesterification [a process involved in biodiesel production], because free fatty acid can easily bond with alkaline to form soap, […] which will hinder the production of biodiesel.” As a result, acid- or enzyme-based catalysts must be used, though both are slower than alkaline based catalysts.

Although acid-based catalysts do not form soap when animal fat waste is used, they leave behind a toxic mix of chemicals as a byproduct, which needs to be treated before being disposed. On the other hand, when enzyme-based catalysts are used, they only leave behind enzyme residue that is not toxic and can be disposed safely, as it is biodegradable. The glycerin that is produced in the process is used in soaps and other cosmetic products.

There is also the possibility of reusing the enzyme catalyst, in contrast with alkaline and acidic catalysts – which are typically discarded as they mix with the waste products – something which Adewale plans on looking into next

Time is of the essence when it comes to biodiesel production. The more time it takes to make biodiesel, the more costly it becomes at the pumps. To make tallow-based biodiesel competitive, Adewale decided to try a new mixing method: instead of using the conventional mechanical stirring, he used ultrasonic cavitation mixing. In a lab setting, this meant sticking an ultrasound probe into a beaker. The ultrasound waves create bubbles and as their size increases with time, the bubbles burst and cause a large amount of dispersion. Adewale explains that “the bursting of that bubble is what is actually called the mixing effect.”

It’s been known for years that using ultrasonic mixing decreases the production time of biodiesel, and there have been plenty of research papers published that document this phenomenon. What makes Adewale’s research unique is the combination of ultrasonic mixing and the use of an enzyme catalyst. One study conducted at the Beijing University of Chemical Technology, published in 2007, found it took thirty hours to produce biodiesel from lard using conventional mixing methods. Another study from 2008 conducted by the University of Agriculture in Pakistan in conjunction with Pakistan’s Ayub Agricultural Research Institute (AARI) produced biodiesel from waste tallow using an acid catalyst and mechanical mixing and found it took 24 hours.

“Alkaline [catalyzed biodiesel production] at the moment is the fastest – within an hour you have biodiesel, but for conventional enzyme[s], it’s like a day. But now, since we’ve been able to reduce it to twenty minutes, we’re going to compete with alkaline in terms of reaction time,” said Adewale. However, the procedure must be improved for it to be used in industry, as the biodiesel yield in Adewale’s study was 85.6 per cent, which is slightly lower than that of conventional methods used to make biodiesel.

Whether or not companies will start using tallow to make biodiesel will ultimately be determined by production costs. Enzyme catalysts are expensive, and it is not yet clear whether or not they can be reused, and if they can, for how long.

Nonetheless, Adewale remains optimistic. He notes that some major Canadian biodiesel companies have already reached out to him to discuss his research findings. The next step for Adewale is comparing the different non-edible animal fat sources in terms of their yield and production time, and perhaps one day seeing his research used in industry to produce more sustainable biodiesel.

—With files from La Bianchi 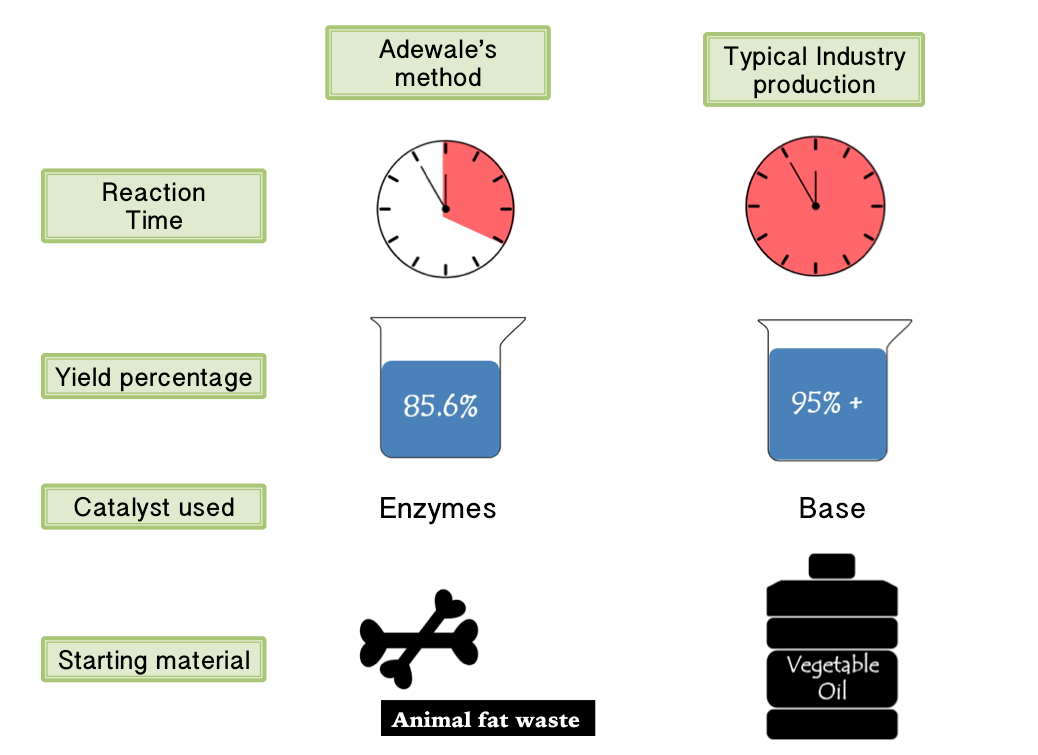 Peter Adewale’s method has its advantages, but it must be refined before it can be used for industrial purposes.