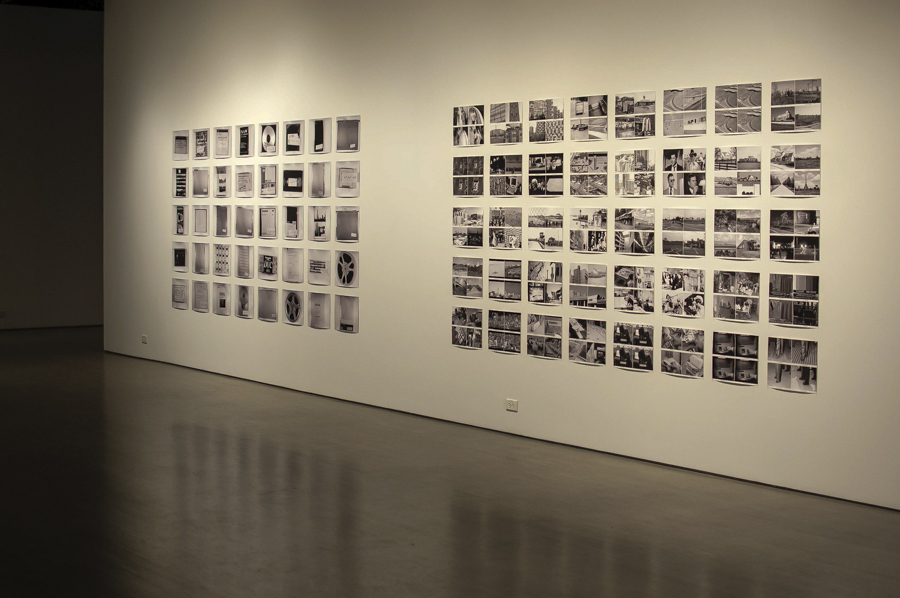 Artist Sean Snyder sits, microphone clutched in one hand, listening to an audience member ask him about hacking in relation to his art installation, Aleatoric Collision (Sony Hacking Scandal) (2015) which addresses the data breach preceding the release of The Interview, a movie depicting the assassination of Kim Jong Un, the supreme leader of North Korea. He is frowning in concentration, and when the audience member finishes, he pauses before answering the question and plunging the room into a discussion surrounding different forms of hacking and the moral codes surround such an activity. Snyder is participating in the gallery talk, along with artists Anne Goldenberg and Matt Pagett, after the opening of his new solo exhibition, “Algorithmic Archaeology,” at the Leonard & Bina Ellen Art Gallery in Montreal. The exhibition runs in collaboration with the 14th edition of Le Mois de la Photo à Montrèal (MPM), titled “The Post-Photographic Condition.”

“I didn’t intend to create an art project – it was my own interest, in a way. […] Initially I just started tracing what transpired around Christmas time,” Snyder said, when talking about his installation Aleatoric Collision (Sony Hacking Scandal) (2015). The Sony Hacking Scandal is one of the central pieces of the show, comprising a mixture of objects, prints, and video, including a framed quote by U.S. President Barack Obama answering a question regarding the Sony hack and a copy of the DVD on its own pedestal, elevating it to an object of high art. Though the piece has a sense of humour, the collection of artwork has a more serious tone, and examines the relationships between the image, propaganda, and the consumer.

The prevalence of the image in social media and its dominant role in society are also key themes within Snyder’s work, as well as topics of discussion during the artist talk. Fellow panelist and artist Pagett said, “One of the things that we see in social media now is the power of filters, so instead of something being censored directly, it is filtered.  Facebook has filters that control what you see on your newsfeed, Twitter has filters, Google has filters; so, I think any time we talk about social media now, that is the new development – to talk about how these filters work, and [Snyder’s] process is the work of examining that filter.”

The prevalence of the image in social media and its dominant role in society are also key themes within Snyder’s work, as well as topics of discussion during the artist talk.

The idea of the filter, or how something can be framed to suit the needs of its producer, is prominent in Snyder’s Casio, Seiko, Sheraton, Toyota, Mars (2004-05), a video that combines different clips of media coverage surrounding a single conflict. The most compelling part of the video arises from Snyder’s comparison of media coverages of the abandoned home of a former leader of a ‘terrorist’ organization. The specific person is not named, leaving the viewer to draw their own conclusions about context. The manipulation of the narrative using  the detritus of someone’s deserted residence is highlighted through the items each news organization focuses on: rotten bananas; a Mars bar; random kitchen items; books.

After a visit to “Algorithmic Archaeology,” each choice on social media becomes a reflexive act – how much am I filtering my life to craft a specific narrative about myself? How much of what I consume is filtered for me to suit the ideals of the producer? Snyder’s work demands that the viewer contemplate what is happening just outside the frame of the image, in both local and global contexts.