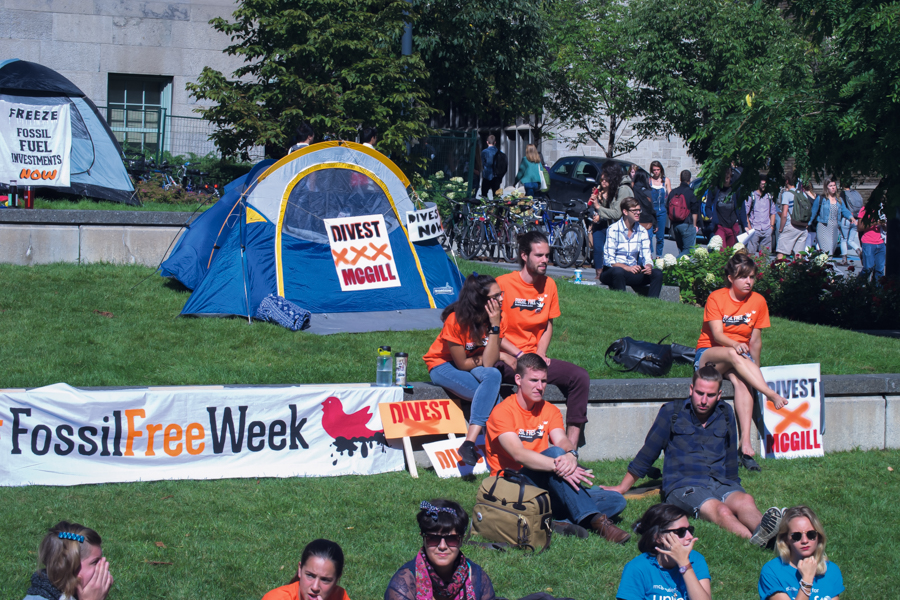 During the week of September 21, Divest McGill organized Fossil Free Week, a series of rallies, discussions, and other events that aimed to convince McGill’s Board of Governors (BoG) and its Committee to Advise on Matters of Social Responsibility (CAMSR) to freeze its investments in the fossil fuel industry.

The first event organized as part of Divest McGill’s Fossil Free Week was a student discussion on “Intersectionality of Justice and Coalition Building,” and took place on September 21. Students from diverse groups such as McGill Students for UNICEF, Demilitarize McGill, McGill Students for Feminisms, and the Students’ Society of McGill University (SSMU), came together to show the different connections between climate justice and various other systems of oppression.

Emily Boytinck, SSMU VP External and a Divest McGill organizer, spoke on how Quebec’s austerity measures are detrimental to the environment. Boytinck used the example of Plan Nord, which aims to develop more mining and extraction projects in Northern Quebec. According to the Liberal government, this is to balance the budget.

“When we’re talking about fossil free, [when] we’re talking about climate justice, it’s really important to recognize that this government’s attempts to balance the budget […] make [it] more likely to approve projects that would have detrimental impacts, not only to Quebec’s environment, but [also] to global carbon emissions,” Boytinck said.

Maud Nathalie Édouardine and Morgane Juliat, representatives from McGill Students for UNICEF, explained that climate change disproportionately affects children. “[Children] are the least responsible for climate change, yet they’re the ones that are going to be most affected by it in the long term,” Édouardine said.

Mona Luxion, PhD candidate in Urban Planning, Demilitarize McGill organizer, and former Daily columnist, spoke about the relationship between militarism and environmental degradation. “The amount of fossil fuels used by the military is ridiculous,” Luxion said. “Research on the American military [has] suggested that it is actually the largest fossil fuel user and the largest greenhouse gas emitter in the world, making up about 5 per cent of the world’s fossil fuel consumption.”

Lastly, Paniz Khosroshahy, speaking on behalf of McGill Students for Feminisms, referred to the United Nations, which recently reported that “climate justice is a gendered issue and affects women more gravely.” Khosroshahy explained that all oppression is interrelated and phenomena like climate change only work to exacerbate the conditions of women and other groups who are already marginalized.

On September 23, Divest McGill held a rally at Community Square in front of the James Administration building. Students and community members convened to hear speeches, chant, and share their reasons for supporting McGill’s divestment from the fossil fuel industry, under a frame that read “I want McGill to divest because…”

Speakers included two McGill alumni: Karel Mayrand, Director General for Quebec and Atlantic Canada with the David Suzuki Foundation and chair of Al Gore’s Climate Reality Project in Canada, and Camil Bouchard, a former member of Quebec’s National Assembly. Mayrand and Bouchard both declared that if by March 30 McGill has not divested from fossil fuels, they will hand back their degrees, and urged other alumni to join them.

“We are no longer able to identify ourselves with an institution which blindfolds itself for the sake of small and irresponsible returns,” said Mayrand.

The rally also heard from Vanessa Gray, a tar sands activist from the Aamjiwnaang First Nation reserve near Sarnia, Ontario. Gray spoke about the impact of Enbridge’s Line 9B Reversal proposal, which would transport tar sands bitumen oil through her reserve, all the way to Montreal.

“We are no longer able to identify ourselves with an institution which blindfolds itself for the sake of small and irresponsible returns.”

Although many Canadians are unaware of the disproportionate impact of oil pipelines on Indigenous peoples, “there are Indigenous communities on the front lines who have no choice – they have to defend their land and their lungs,” Gray said.

Derek Nystrom, a professor in the Department of English, gave a speech on behalf of McGill Faculty and Librarians for Divestment. “McGill […] is in direct contradiction to many of the things that we’re trying to teach our students in our classes,” said Nystrom.

Divest McGill organizers then led the crowd in chants, which were filmed to be sent to Stuart “Kip” Cobbett, the chair of the BoG and CAMSR. Chloé Laflamme, an organizer with Divest McGill, told The Daily that Cobbett’s response to the week of mobilization was that “the Board could not take a public stance on fossil fuel divestment because [Cobbett] thinks it would be to ‘prejudge the issue.’”

Jenny Fryer, a U2 international development studies and political science student, expressed a desire for still greater student engagement with Divest McGill’s efforts. “I think McGill, as a huge campus and a huge community, could definitely have a better showing at things like this,” said Fryer.

“These movements tend to underrepresent minorities and groups that really deserve more of a voice.” Fryer added that one reason for this might be the fact that “we’re on a campus that isn’t as diverse as I would want it to be in a perfect world.”

Iain Childerhose, a U4 urban studies and Canadian studies student, told The Daily, “You really need to stand by what you say, obviously. Divest has been going for two and a half years and there haven’t been any changes, so it might take five years working with like-minded organizations to see real changes.”

“I’ve seen this with a number of other similarly critical organizations on campus. You’ll have one really strong year where you’ll have a bunch of people who have been involved for a while, and then they graduate and then it takes a few more years of education for people to be as mobile,” Childerhose commented. “So the University knows that if they stall for a little bit, then it’ll take some rebuilding of the student organizations.”

“I worry because it’s such a huge bureaucracy,” said Fryer. “There’s so much red tape. […] It’s a lot of money and it’s a big system. But I really hope that they do [divest], that they’re smart enough to, and that they can go down on the right side of history.”