Police crack down on May Day demonstrations 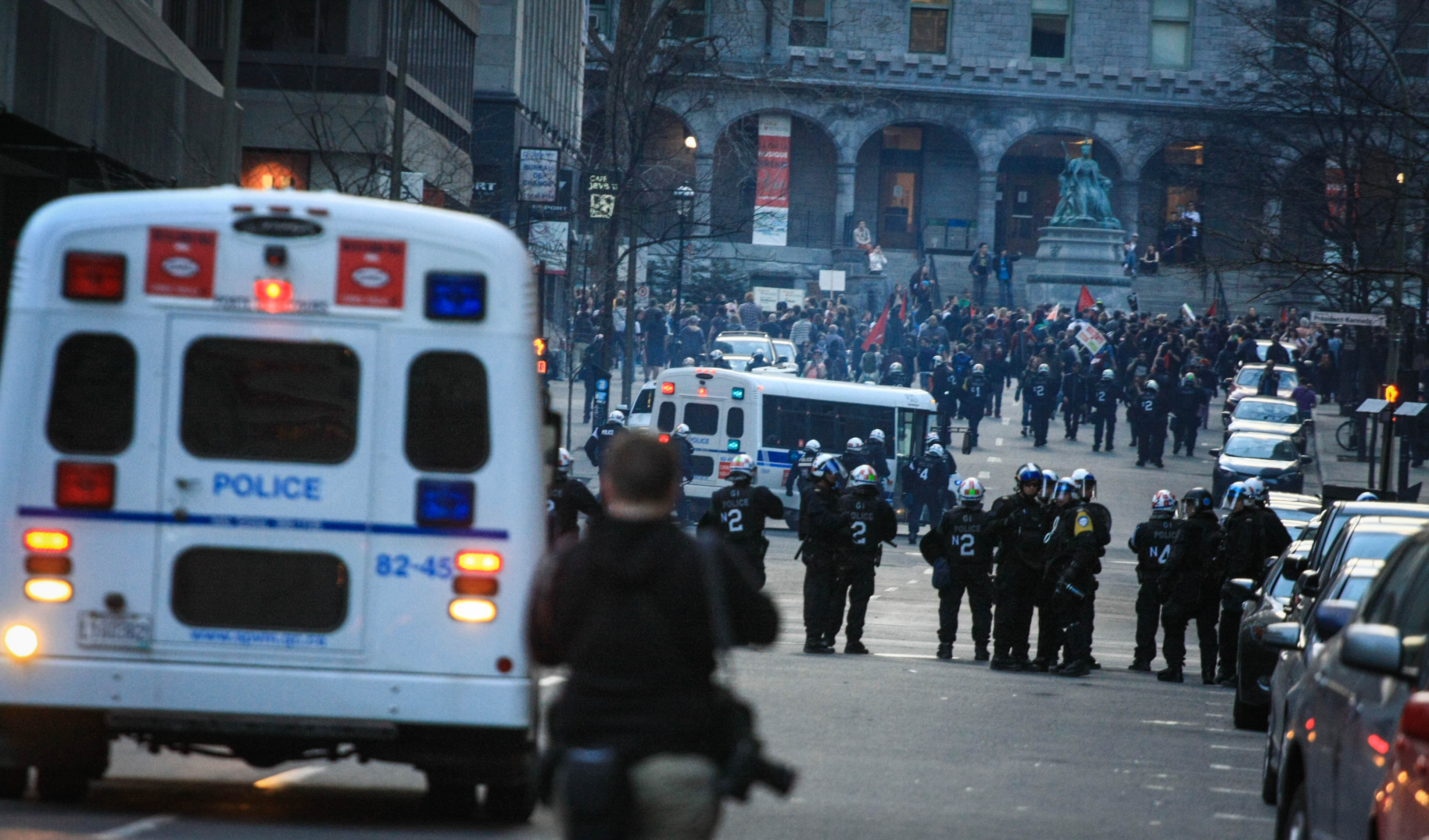 Over 860 community organizations, student associations, and unions across Quebec – an unprecedented number – went on strike on May 1 to mark International Workers’ Day and protest the provincial government’s austerity measures. In Montreal, protests and disruptive actions began early in the morning and culminated around 7:30 p.m. when a demonstration numbering over 500 people, organized by Montreal’s Anti-Capitalist Convergence (CLAC), was violently dispersed by the police.

Having promptly declared the demonstration illegal, police agents from the Service de police de la Ville de Montréal (SPVM) and the Sûreté du Québec (SQ) confronted the group at several locations and deployed large amounts of tear gas, injuring protesters and passers-by, including children. According to Radio-Canada, SPVM spokesperson Laurent Gingras was unable to give an exact reason for the dispersion maneuver.

“They didn’t let us walk, they gassed us after twenty minutes,” one protester told The Daily in French. “It was seriously appalling.”

Many fled into the metro. Some of the remaining protesters were kettled on Maisonneuve, with the night ending in 84 arrests.

“It’s obvious that the escalation of repression we’ve seen in the last few years is the result of a political directive to nip all protest movements with a radical discourse in the bud,” CLAC wrote in a press release. “To be clear, we will not allow ourselves to be chased, beaten, and repressed without a fight.”

From 8 a.m. to 9 a.m., protesters associated with the Coalition opposée à la tarification et à la privatisation des services publics, a coalition of over 85 social groups fighting cuts to public services, blocked access to the Banque Nationale tower, inhibiting its activities. At the same time, roughly 300 protesters occupied the offices of Québecor Media. These actions were followed by a demonstration that drew thousands of people.

“The main reason why community organizations are mobilizing is because the people we work with on a daily basis are experiencing the consequences of austerity,” Coalition spokesperson Véronique Laflamme told The Daily in French. “These are people who are seeing employment integration programs for people with disabilities being cut, seeing their welfare cheques being cut, seeing social housing being cut […] people who have less and less access to quality public services because of cuts to healthcare and social services.”

“Community groups do a lot of work with very few resources. They’re overburdened and it’s harder and harder for them to fulfill their mission, because there are more and more people who need help,” added Laflamme.

Joining the mobilization for the day of action, twenty-four CEGEP teachers’ unions across Quebec voted for one-day strike mandates to protest severe government cuts to education.

Quebec’s labour board ruled on April 30 that the teachers’ strike was illegal, and the Confédération des syndicats nationaux (CSN) advised its members to comply with the ruling. Despite this, successful picket lines were held and classes cancelled at many CEGEPs, including Maisonneuve and Rosemont in Montreal.

A similar number of university and CEGEP student associations were also on strike.

Quebec author Anny Schneider, who attended the morning protest, insisted on the importance of continuing to mobilize non-student sectors of the population. “I think there aren’t enough older people [protesting] – people are afraid for their jobs, for their social positions,” she told The Daily in French. “I remain hopeful.”

Looking forward, protesters and organizers emphasized the need to continue to build momentum toward strong mobilization in the fall.

“We’re determined, and we cannot let this go. We’re already seeing the ravaging effects of austerity measures throughout Quebec,” said Laflamme. “The battle of the next few months is a battle for the redistribution of wealth.”

Some expressed concern over the brutality of the police repression, and its potential impact on mobilization.

“There’s a lot of people who don’t want to come back to demos because of how violent it’s become,” a student at CEGEP du Vieux-Montréal, who attended picket lines there, as well as the night protest, told The Daily in French. “The repression is very strong.”

“I’ve never seen so many police in Montreal,” said Schneider. “It’s very unhealthy; it scares me, it saddens me, but I will continue to express myself.”