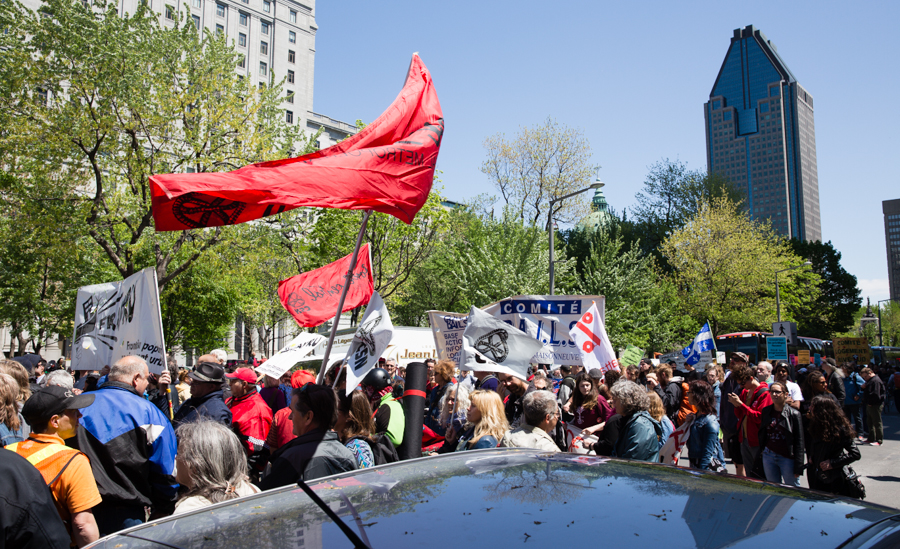 Several hundred demonstrators and campers joined the march to protest housing inaccessibility and denounce the limited funding for social housing from both the federal and provincial governments.

Protesters, including over 30 community organisations and unions from across Quebec, first gathered at Square Dorchester at 1 p.m. to march to the location of the camp, which had been kept secret. Speeches from organizers and local celebrities kicked off the march. Actor and playwright Alexis Martin highlighted everyone’s right to protest, saying in French that a “public space is a space for protest […] and [these spaces] must be invested in.”

“We want the state, the government, the municipalities […] to develop and invest in social housing so that the general market for housing [can] be affordable to normal people and people with low income.”

“We want the state, the government, the municipalities […] to develop and invest in social housing so that the general market for housing [can] be affordable to normal people and people with low income,” explained Alexandra Pierre, a member of the community organizing staff of Project Genesis, a social justice organization located in Côte-des-Neiges.

Mona Luxion, a protester and PhD student at McGill told The Daily, “I’m here because I think that housing is a human right […] and something that we as a society should be providing for people and fighting for.”

Protesters and campers arrived at Parterre du Quartier des spectacles around 2:30 p.m.. Campers began to set up tents while protesters formed a circle around the park. Organizers invited protesters to return the next day for other planned actions.

According to FRAPRU’s website, the camp was intended to be an ongoing installation which would educate the public about housing problems and also denounce the Quebec government for cutting the funding for new social housing in half in its last budget and the federal government for gradually decreasing funds for housing subsidies.

Approximately 60 campers from Montreal and nearby regions who are either facing housing difficulties or are tenants of social housing were planning to stay in the tents. Few tents had been installed when police intervened at around 3 p.m., ordering campers to dismantle the tents. Campers then voted to decide whether they should stay on site, with the majority voting to do so.

“It’s very difficult for us to go on with our daily lives for the rent that we pay – it takes a lot of our income.”

“It’s very difficult for us to go on with our daily lives for the rent that we pay – it takes a lot of our income. So that’s why we are here, to let them know, because we do many many activities [and] manifestations, [but] it’s like nobody hear[s] us […] we want to them to just see that we are very serious, that we are in great in need of social housing,” stated one protester with the Comité d’action de parc extension (CAPE), a housing rights organization.

At around 4 p.m. the police intervened directly, seizing some of the tents and arresting three people. Police surrounded the barely-assembled camp from multiple directions and backed the crowd away from the tents. The camp was fully dismantled and protesters dispersed by 5 p.m.

On May 22, FRAPRU set up camp at the Agence de la santé et des services sociaux of Montréal, on the corner of St. Denis and Pins. However, the campers were evicted from this location as well. On May 23, another camp was set at the corner of the Grande Bibliothéque on Berri. On May 24, the campers decided to end their demonstration.

Earlier this week, Montreal Mayor Denis Coderre declared that he did not accept the notion of a camp, referring to the “security problems” he associated with the Occupy Montreal camp at Square Victoria in 2011.

“My message for Coderre [and] for Couillard is to stop austerity, to stop oppression, to listen to the people. We are afraid today, they use intimidation [and] repression,” Sandra Cordero, a protester who was present at the May Day anti-austerity protests, where police used excessive violence, told The Daily after the police had dispersed the crowd.

“A lot of people are suffering [from inaccessible housing], kids are suffering. I have six kids. I am a single mother and I don’t have a big [income] so I count on that housing; and [the federal government has] that money and they are not investing in housing.”