Vaginas in the making

Empowerment, one paper-mâché labia at a time 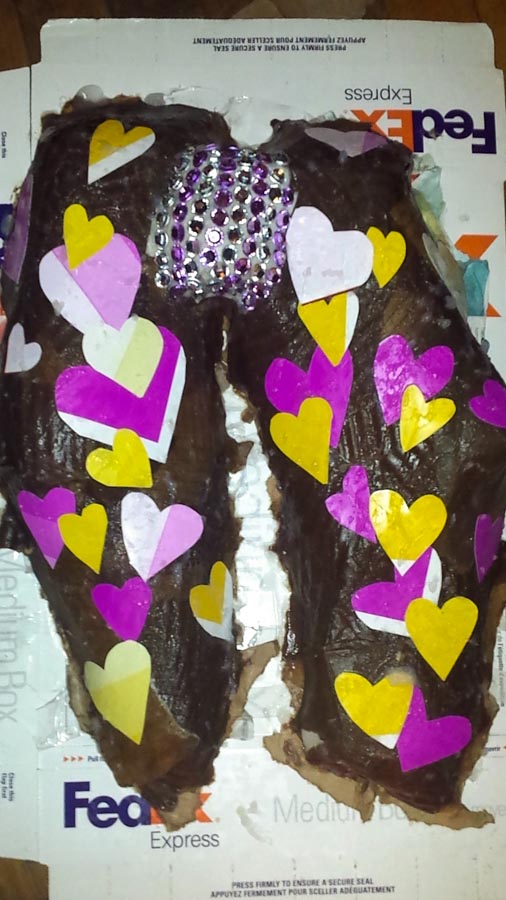 Courtney Kirkby’s apartment floor was covered with vaginas last Wednesday night as guests sat cross-legged, chatting and complimenting each others’ vaginas. Kirkby organized this “Vagina Puppet-Making Workshop” with Concordia’s Centre for Gender Advocacy in order to teach participants the process of taping balls of newspaper and pop cans to construct paper-mâché labias. In truth, there was no formal process at all, since no two vaginas looked remotely alike. This paper-mâché vagina party created a stimulating space to discuss feminisms and combat the demonization of female sexuality.

At the event, workshop participants ate homemade daal and talked about both personal and political sexual issues. “I think there’s an under-emphasis on sexual organs [in queer circles]. We talk a lot about gender identity, but not a lot about organs,” said Nadia Argueta, a 2013 McGill graduate and current social worker. She pointed out that while not all women have vaginas – and so focusing exclusively on one type of sexual organ is cissexist – the vagina is largely undervalued, shamed, and stigmatized in our society.

The workshop aimed to counter this very stigma, which comes from patriarchal body policing. Participants worked enthusiastically, embellishing their vagina puppets with glitter, rhinestones, pictures of the Virgin Mary, and pipe-cleaner pubic hair. With loud, joyous gestures they reclaimed the vagina as something to be celebrated in its beauty.

“I was really surprised at how central the experience is,” Kirkby said of making her first vagina, “Of getting to use the glue and use the paper [to] feel the shape of the vagina – getting to think about something that’s often hidden from view.”

Participants worked enthusiastically, embellishing their vagina puppets with glitter, rhinestones, pictures of the Virgin Mary, and pipe-cleaner pubic hair. With loud, joyous gestures they reclaimed the vagina as something to be celebrated in its beauty.

Kirkby’s past experience includes working for CKUT and the Centre for Gender Advocacy, but the inception of the idea for her first paper-mâché vagina occurred last year in South America.

While covering the 2014 Bolivian elections, Kirkby roomed at a hostel-café run by Mujeres Creando, a radical anarcha-feminist collective that works to deconstruct patriarchal, colonialist symbols and rhetoric at micro and macro levels. “They combat machismo and violence against women,” Kirkby explained, “[and] they use a lot of controversial art in their work – what a lot of people see as aggressive artwork – and it was really inspiring.” To thank her hosts, Kirkby made her first paper-mâché vagina, which would birth future cardboard vaginas in Montreal.

The experience was a visceral one, as participants coated pieces of soaked cardboard with thick warm glue. Andrea Miller-Nesbitt, librarian at the McGill Life Sciences Library, shaped shining gold tissue paper around the outer labia of her paper-mâché vagina. “We live in a very patriarchal society,” she said, critiquing the lack of knowledge about female in relation to male genitalia.

The artists discussed the pitfalls of cultural stigma while carefully sculpting vaginal curves and crevices, their meticulous work making the paper-mâché vaginas both literally and figuratively stronger. Kirkby also told The Daily about ideas for future workshops, including experimenting with different materials and shapes and possibly making a “vaginal Medusa” covered in vicious snakes – an allusion to various Southern American folk tales about a mythical woman with a venerably violent anti-rape precaution.

“Most women have not two lips, but four,” Kirkby reflected, noting that one can only imagine the stories women would tell if they were not just free to talk, but also able to talk freely, with unrestrained power. Resisting and deconstructing cultural norms is a painstaking exercise in patience; but this workshop opened a space to build not only highly provocative and beautiful mantelpiece hangings, but also the foundations of an artistic resistance.