Quebec students on strike: a timeline

Looking back at a first week of mobilization 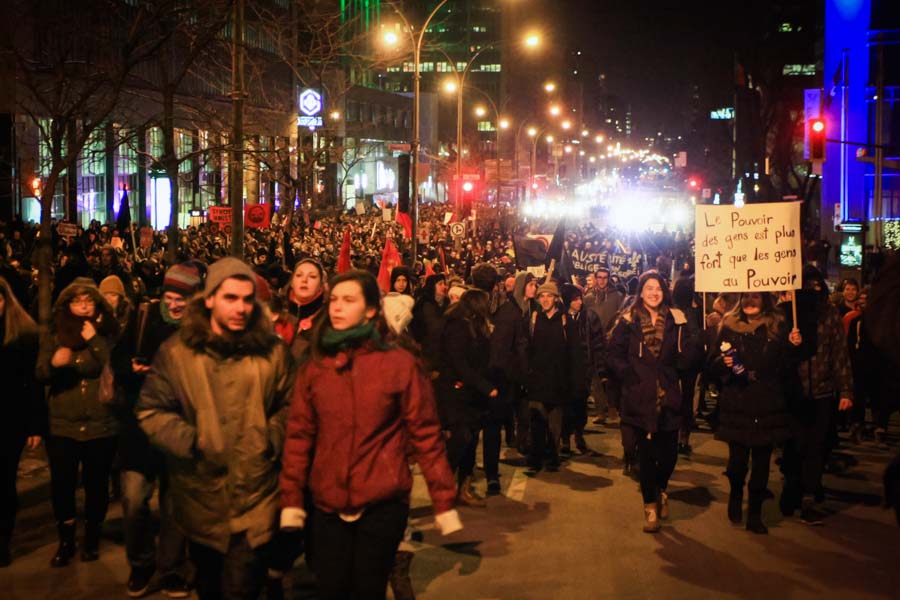 Escalating the pressure against the provincial Liberal government‘s austerity measures and cuts to education, healthcare, and public services, nearly 50,000 students across Quebec, including McGill‘s French Language and Literature students, were on strike last week. Many of them will be on strike until at least April 2, and some have already renewed strike mandates that extend even further. Students and supporters have participated in daily protest actions, some of which were met with heavy police repression — especially in Montreal and in Quebec City.

Braving the snowy weather, Montreal students kick off the strike with a 5,000-strong demonstration.

At Université Laval, anti-strike students hoping to access their first classes of the week call the police, who arrive on the scene but do not attempt to break the picket lines.

A demonstration in Montreal sees police involvement, and ends in several injuries and 24 arrests.

Le Devoir reports that, in an unprecedented move, the Université du Québec à Montréal (UQAM) has moved to expel nine students who have participated in strikes and demonstrations over the past two years, prompting a solidarity petition from the student body and an outraged letter from the professors‘ union.

In the early afternoon, police violently attack a demonstration of about 200 in downtown Montreal.

A night demonstration in Montreal against austerity and for accessible education draws thousands of people, and continues for over two hours despite clashes with police.

In Quebec City, police swiftly and brutally repress a protest of about 500, making 274 arrests. Two people are bitten by police dogs.

Demonstrators gather by the Parliament building in Quebec City to protest the presentation of the Liberal government‘s budget. Riot police are deployed, and one demonstrator is shot in the face point-blank with a tear gas grenade.

Thousands of Montrealers take to the streets once more for a night protest. Demonstrators march for over an hour, but are dispersed with sound grenades, and at least 81 people receive fines.