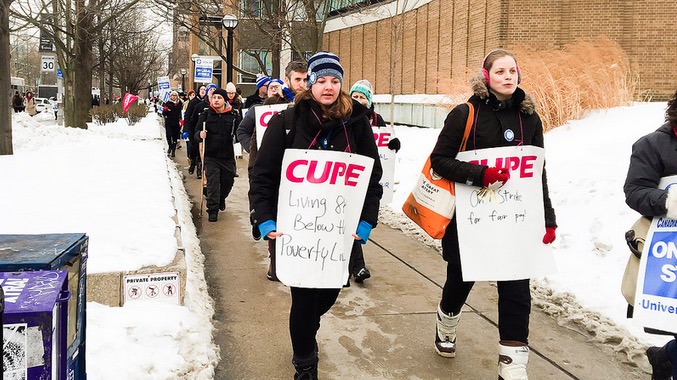 Dissatisfied with the University’s monetary offer, McGill teaching assistants (TAs) voted at a General Assembly on March 19 to mandate the executive of AGSEM, their union, to hold a strike vote by April 10. Negotiations have been ongoing since the TAs’ collective agreement expired in June 2014, but the University has not been receptive to TAs’ demands.

“I will say, having been at the bargaining table, that we’ve had to argue very strenuously for what seemed to us relatively minor changes to the collective agreement,” AGSEM TA Grievance Officer and Bargaining Committee member (and former Daily Publications Society Chair) Benjamin Elgie told The Daily.

The TAs’ main demands include a wage increase of 5 per cent per year, a partial health insurance and tuition waiver, and a limit on TA-to-student ratios. On March 18, the University offered the TAs a yearly wage increase identical to that of the Quebec public service workers – which is currently in negotiations – with a one-year lag. Unlike some similar unions in Quebec, AGSEM is not affiliated with the Public Service Alliance of Canada (PSAC), and is not involved in public service collective agreement negotiations with the government.

“We’re not a public service union, [and] the amount of the increase is currently unknown,” said Elgie. “The government’s offer to the public service has been […] a 3 per cent raise [in total] over five years with two years of wage freeze, which amounts to a cut [accounting for inflation], and historically, we’ve managed somewhat better than that.”

“The offer of a wage cut is not acceptable by itself, but the lack of even any attempt to come to a compromise on the other demands regarding tuition and ratios was very surprising to our members, and very disappointing.”

Speaking to The Daily, AGSEM President Justin Irwin noted that McGill TAs’ working conditions compare very unfavourably to those of TAs at the University of Toronto (U of T), who were on strike until last week, and to those of TAs at York University, who are still on strike. According to AGSEM mobilization material, the hourly wage at York can be almost double that at McGill.

“In terms of the plain numbers it’s pretty straightforward – they have better agreements than we do,” said Irwin. “In Toronto they have higher costs of living, that’s true, but the extent to which we’re able to meet our costs of living is still less, in many cases.”

The University’s disappointing offer on wages, as well as its failure to consider the TAs’ other demands, prompted AGSEM members to request that the executive hold a strike vote.

“The offer of a wage cut is not acceptable by itself, but the lack of even any attempt to come to a compromise on the other demands regarding tuition and ratios was very surprising to our members, and very disappointing,” said Elgie.

“Our members aren’t satisfied […] with our quite rational demands […] being completely rejected out of hand,” added Irwin, noting that the strike vote will likely be held in the week of April 7. Members will decide the duration and parameters of a potential strike at that meeting.

Elgie and Irwin noted that a TA strike may affect exam invigilation as well. The collective agreement for invigilators, who are also members of AGSEM under a different bargaining unit, will expire on April 30.

“Up until the end of April, TAs are the only members of AGSEM that are in a position to strike; however, it’s possible that, if we are striking […] picket lines will affect invigilation of exams as well,” said Irwin.