From script to the stage 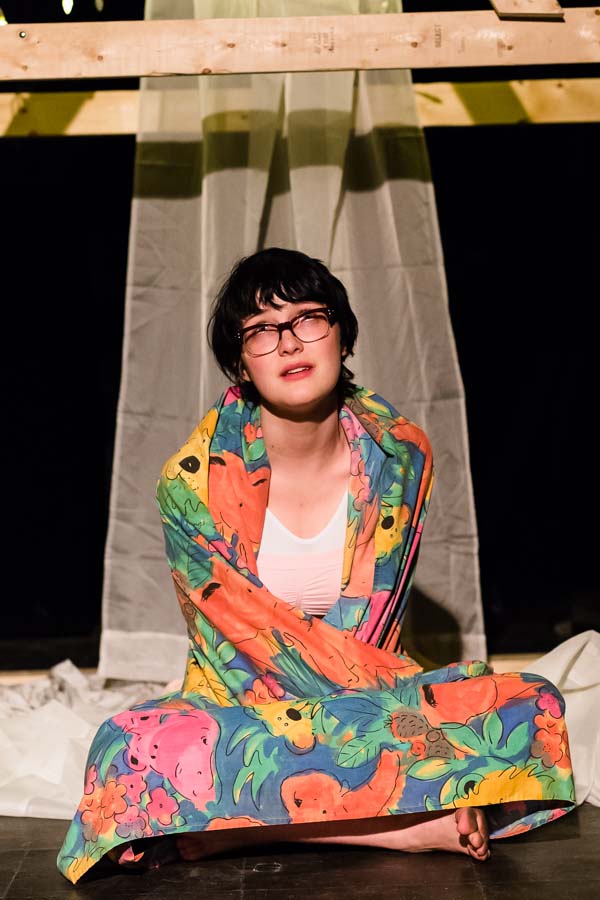 While schools like McGill and Concordia have thriving theatre communities, it is often a challenge for students to find a platform for their art off campus. During the cozy evenings of March 5 to 8, one of Montreal’s most prominent anglophone theatres, MainLine Theatre, presented its solution to this problem: the fifth annual MainLine Gala for Student Drama. The gala is an open space that gives young artists a chance to showcase their work, as well as connect with an enthusiastic crew of producers, actors, and event organizers.

The organization of the MainLine Gala lies completely in the hands of students. Having heard that there was no one prepared to take responsibility for this year’s Gala, Laurent Pitre and Kenny Streule, both working in Montreal theatre, decided to take up the mantle. “I [couldn’t] stand around and let that opportunity for young students disappear,” Pitre told The Daily. In order to get their plays produced, students had to submit scripts to a panel of judges – including Pitre – who then made the tough choices. Three diverse plays were chosen for production, each written by a woman; the playwrights jokingly refer to the event as a “girl-power gala.”

After selection, the production process was up to the playwright’s preference. Writing a good play is one thing, but it is another challenge altogether to have that play assessed by a creative team. As Calla Wright, one of this year’s playwrights, explained, one of the main features of the Gala was fostering a “non-threatening approach” to sharing one’s art. Two of the writers, Darragh Kilkenny-Mondoux and Rhiannon Collett, found directors to help them through the process of staging their written works.

Speaking to both the importance and difficulty of the director’s role, Kilkenny-Mondoux said, “More than the cast, finding a director that gets it is the trickiest part. They get full control of your baby.” She worked with director Mitchell Cohen to bring her baby, Form of Flattery, to life. The play, which tells the story of the rise and fall of Athena, touches upon the theme of rethinking societal values through a philosophical lens. Form of Flattery portrays the transfer of power away from the dominance of the mythic old world, Ancient Greece, to a more modern society concerned with material possessions, exploring how a people choose what is important. Kilkenny-Mondoux and Cohen’s collaboration treats this play as a combination of intellectual exercise and contemporary humour, which makes the philosophical concepts easier to wrap your head around.

“Unlike the permanence and eternal nature of film […] theatre is like liquid,” – Darragh Kilkenny-Mondoux, student playwright

Kilkenny-Mondoux acknowledged that this collaboration was helpful given the developmental nature of the production process. In theatre, there is a constant re-shaping of the work before and after opening night, subjecting it to the reactions and comments of the audience and letting it be reborn. “Unlike the permanence and eternal nature of film […] theatre is like liquid,” she explained. In the MainLine Gala, this liquidity is an essential part of the appeal for the playwrights. “I think there’s a difference between your brainchild and your experiment, and I thought the gala would be a perfect opportunity to workshop,” Kilkenny-Mondough said. “I don’t think [the organizers] wanted a clear vision of like, ‘this is the way it’s got to be’; you had to be open to work with the space.”

While Collett also chose to bring in an outside director in order to develop her play, Girlhouse, she did so to develop some personal space from it. Similarly to Form of Flattery, Girlhouse leaves much open to interpretation, but treads the line between dream and reality instead of old world and new. The play is less an experience of theoretical contemplation and more one of catharsis. Written and performed by Collett and directed by Amanda Goldberg, the one-woman show focuses on a young woman, Cassandra, who remembers a traumatic experience in her childhood associated with a male nanny.

“My play exploded out of me as a monologue that made very little sense,” Collett said. “What I realized through the experience of writing this play was that it was a topic that didn’t make sense. […] And so my goal with it was to try and find empowerment and resolution, but also understand that that’s a story that lives on.” To find closure, Collett decided to act in the play. “I wanted the play to be an exorcism,” she said. “It had to be active [because] by the time I got to the rehearsal process I couldn’t think about it anymore. […] Having Amanda come in as a director was amazing because she took it through her brain and then fed it back to me, so I’m able to perform it, but there’s also this distance,” Collett explained.

“I wanted the play to be an exorcism. It had to be active [because] by the time I got to the rehearsal process I couldn’t think about it anymore. […] Having Amanda come in as a director was amazing because she took it through her brain and then fed it back to me, so I’m able to perform it, but there’s also this distance,” – Rhiannon Collett, student playwright

On stage, Girlhouse impresses with its sharpness in conveying emotion. While playing with the division between truth and imagination, what it makes very clear is the undeniable wrongdoings that we, as humans, are prone to, and the lasting effect they have.

Like Collett, Wright also chose to play a part in the production of her play, How I Show Love. Directing the play herself, Wright cast a friend who had been instrumental in the writing process as the main character. Her play follows Kenneth, a barista who is tired of his thankless job and begins to wish evil on his customers. Wright drew the storyline from her personal experience in the food industry, feeling the attitude toward personnel and work conditions at minimum wage jobs needed public discussion. A play is perhaps the best way to address this issue, which is a huge one for young artists trying to create while still earning a living.

Even as the play’s director, Wright expressed her amazement at the enthusiasm for collaboration she’d experienced throughout the project. “Just the amount of people who want to give their all, to bring their own costumes, to create a set around it, is absolutely mind-blowing,” she explained. “It’s not something we do by ourselves at all. We lay the egg and then we need a bunch of fertilization.”

Though each of these plays feature different content and context, they all similarly serve as a critique of and resistance to modern society and the contemporary human condition. Themes of rebellion and empowerment ran through all of the performances, whether set in Ancient Greece or a 21st century coffee shop. Perhaps most striking is the parallel between the strength of the characters in these plays and the strength of the ambitious students writing them. In giving three young playwrights the opportunity to tell these stories of empowerment, the MainLine Student Drama Gala is, in turn, empowering young artists in Montreal.