Bring Your Own Juice brings all the laughs 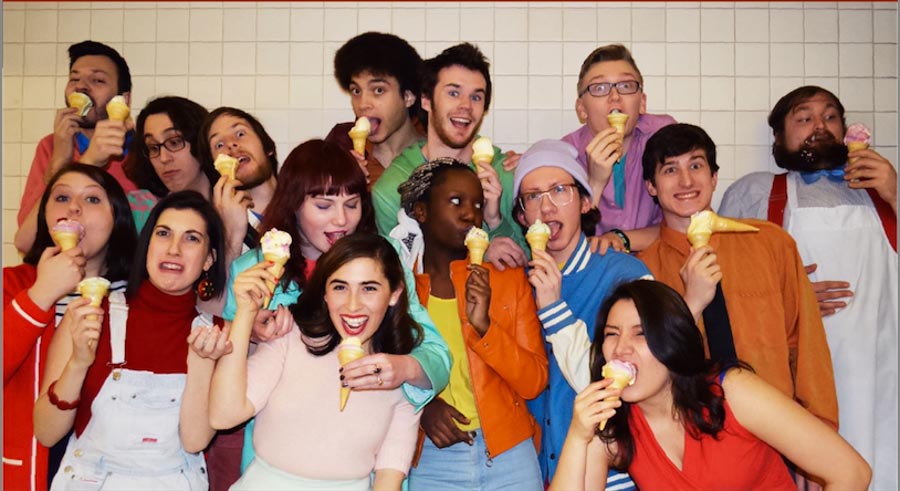 Bring Your Own Juice (BYOJ), McGill’s sketch comedy troupe, describes itself as a “collective comprised of McGill’s funniest improvisers, stand-up comedians, writers, and humour theorists.” Whether or not humour theorists actually exist, BYOJ’s annual sketch comedy show last weekend certainly gave the McGill community a lesson in all things funny. Written, produced, and directed entirely by the team’s 15 members in just one short month, the show was a laugh-out-loud, spit-out-your-juice spectacle of hilarity.

The sketches were fun, fast-paced, and in your face. There was hardly time for the audience to take a breath as the comedians unabashedly doled out punchlines with perfect timing. They were unafraid to throw a wink and a nod to pop culture – their up-and-coming boy band, “True Infinity,” should be passing One Direction on the music charts soon – but didn’t fall into any bland parodies, choosing to stay near and dear to their own creative voice.

The team jabbed at many familiar stereotypes, poking fun at the high tensions of university life. One sketch about a group of frat bros in a book club ended with the boys on the ground sobbing about the beauty of literature. Suddenly, two girls burst in to watch sports, and, upon seeing the emotional bros, they bemoaned that “this happens every month!” While satirizing McGill’s ‘bro culture,’ this sketch also made fun of those of us who place too much value on stereotypes and experience shock when a so-called ‘bro’ says something intelligent in conference.

Another sketch took these student stereotypes to the point of absurdity, cramming every typical ‘new kid at school,’ coming-of-age movie into one whirlwind scene. In the space of five minutes, the new kid was swept into the lunchroom drama (think the iconic Mean Girls cafeteria scene), faced off against the head cheerleader, won a dance battle for her crew, briefly dated the school rebel, took the final shot of the championship basketball game, and made out with the pretty-boy jock. Not too bad for a first day at school. It was hilarious to see all the tropes from movies like Grease and Ferris Bueller mashed together into one long “Save the school! Win the game! Go to prom!” narrative, pointing out just how strangely Hollywood represents young people – and how readily we accept these representations.

In an interview with The Daily, BYOJ members Harry Turner and Matt Bobkin explained that upcoming plans for the collective include becoming “an official SSMU club,” followed by world domination.

Anyone who has ever had to deal with an arrogant musician would have appreciated the sketch that featured a pretentious punk boy telling a girl that he knows all about “feminism and equality and meninism.” He then asked whether she was on “her period day,” insisting that she didn’t understand the true meaning of his songwriting artistry. After she pushed him out of her apartment, the girl, in an empowering moment, picked up his guitar and echoed the thoughts of every feminist in the audience, singing that she’s “tired of these garbage punk boys, circle-jerking to their garbage punk noise.”

In addition to scrutinizing student tropes, BYOJ also turned the lens on their own practices, doing an entire bit where the stagehands continuously came on and off stage to either quickly change the set or simply lie on the ground. The team did a superb job in this scene of twisting the awkward theatrical divide between stage and audience into a joke, using their space to its full potential without ever breaking out of their comedic role.

However, while the show was still accessible for a broader Montreal community, the themes were definitely targeted at a student audience, as much of the humour relied on parodying various aspects of university culture. Though these in-jokes made the show more enjoyable for McGill students, a few of the punchlines would have gone over the head of anyone outside the bubble.

In an interview with The Daily, BYOJ members Harry Turner and Matt Bobkin explained that upcoming plans for the collective include becoming “an official SSMU club,” followed by world domination. On a more serious note, they confided that the secret to a good sketch is “trusting your troop members.”

If that is indeed the case, then the members of BYOJ must trust each other completely. McGill doesn’t have a big comedy scene, but BYOJ filled that void with dynamic writing and hilarious actors. With the upcoming term paper and final exam season, it’s nice to relax and giggle for a few hours. BYOJ selflessly provided the opportunity to step back and laugh at the stereotypes we experience every day, giving us some perspective on our own ridiculous cultural norms. The collective reminded McGill students that it’s good to laugh at yourself every now and then.