As it should be seen

Exhibit tells of Palestine through fact and experience 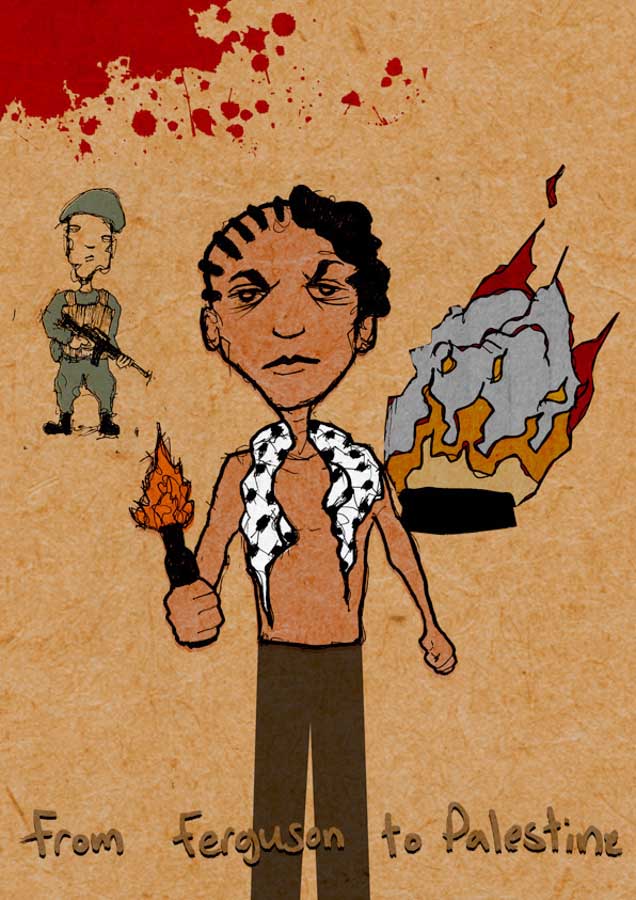 Art can “show the world as it’s supposed to be seen,” according to Javier Hoyos, one of the curators of “Visualizing Palestine,” an exhibit held at Concordia last week as part of Israeli Apartheid Week. The exhibit showcased a collection of images from the non-profit research group that gives the exhibit its name, as well as the work of Palestinian artist Nidal El-Khairy. With these works, “Visualizing Palestine” showed the Palestinian liberation struggle and the reality of living under occupation as it should be seen – free of propaganda and rooted in the voices of the oppressed.

Presented as poster-size reproductions of his original ink-on-paper images, El-Khairy’s art provides powerful visual critiques of current events in Palestine and the Middle East. El-Khairy, whose family was displaced from Jordan in 1948, possesses an intimate perspective of the occupation that is palpable in each image. One striking piece called Cirque du Soleil exposes this oppression with jarring symbols that would likely strike home for both Palestinian and Canadian viewers. In it, an acrobat from the Canadian circus company of the same name practices contortion on an Israel Defence Forces (IDF) tank. A crowd surrounds the base of the tank, watching the acrobat’s mesmerizing performance.

With the caption “You might be flexible, justice isn’t,” the piece calls out the company and the uncritical international public that is failing to question this complicity.

For anyone who has attended a Cirque du Soleil performance, the image comes as a slap to the face, a stinging wake-up call, clearly alluding to the company’s Tel Aviv tour in 2013. With the caption “You might be flexible, justice isn’t,” the piece calls out the company and the uncritical international public that is failing to question this complicity. This unexpected marriage between the graceful entertainer and the violent vehicle emphasizes the link between a seemingly innocent act and the perpetuation of war.

El-Khairy’s work also addresses police brutality and Indigenous solidarity, drawing on his experiences of living in Canada and the U.S.. His piece From Ferguson to Palestine links global systems of colonization, white supremacy, and imperialism. The image portrays a man of colour holding an ignited torch in an unidentified setting and a police officer clasping a machine gun. The man has braided hair and wears a effiyeh, and is thus symbolically tied to two different identities that share a common oppressor. The setting’s anonymity plays into the universality of racial oppression and the destruction of bodies of colour, while the lit torch is an empowering beacon of resistance and solidarity.

Infographics from the research group Visualizing Palestine echo El-Khairy’s vivid stories but instead use hard facts and statistics. The images include charts, graphs, and maps that reflect Gaza’s water crisis, the demolition of Palestinian homes, illegal Israeli settlements, and ceasefire violations.

Providing an accurate alternative to the mainstream media’s biased statistics, the graphs also avoid the dehumanization that usually accompanies these numbers. Rather, they are infographic narratives that utilize imagery to accentuate the scale of damage inflicted on Palestinian communities. In a diagram of water supply appropriation in the West Bank, for example, the thickness of the water pipes shown stretching from an aquifer to Palestinian or Israeli homes indicate the drastic inequities of supply.

Another powerful graph shows a bulldozed Central Park. The caption reads: “Uprooted. The number of uprooted Palestinian olive trees = 33x the trees in Central Park.” Presenting the destruction of a site beloved by many, the image evokes a strong, personal response from the viewer.

With carefully chosen symbols, visual storytelling thrives in this exhibit. “Visualizing Palestine” evades explicit, gory photographs, yet still resonates with painful realities. Without sensationalizing, it communicates facts and individual experiences side by side, and gives a collective group the recognition it deserves. Most impressive in the exhibit was the facilitation of a dialogue between the oppressed and those complicit with the oppressors, providing a non-violent medium for communication. As Hoyos tells The Daily, “[Art] has no borders; it has the power to challenge the status quo, which is to silence, erase, abuse, and oppress the Palestinians.”