A clash of icons 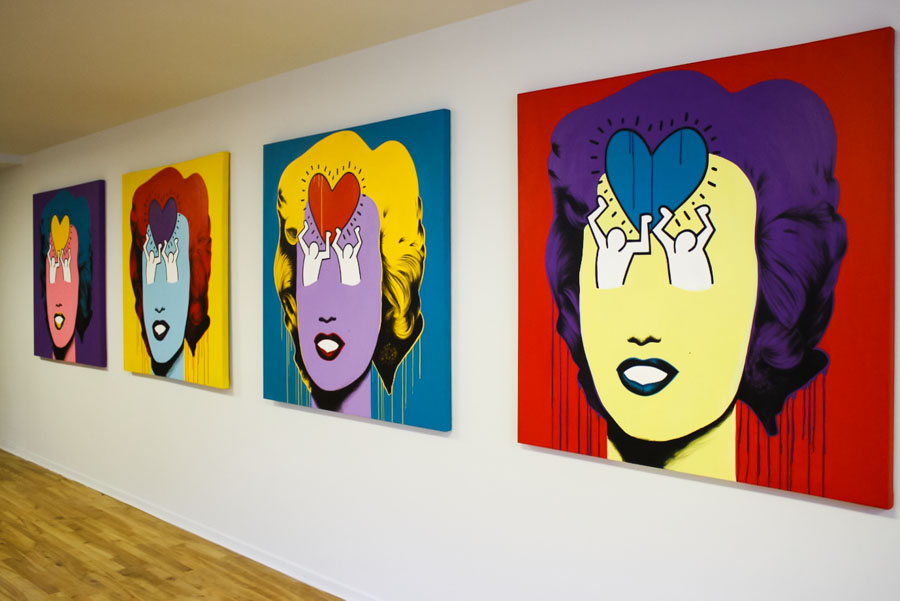 From the outside, idiphi’s new gallery space looks like any other late-twentieth-century Plateau storefront. However, the architecture firm’s ephemeral gallery delivers much more than you would expect from its exterior. The pop-up gallery is really an old hardware store that has been sculpted into an art space using only the materials from the original structure. The site is slated for demolition and the construction of condos in its place. Inside, a white tree snakes up through the exposed ceiling, emerging from a floor mural. The mural depicts Francisco Goya’s 19th century firing squad from The Third of May 1808 shooting into a Roy Lichtenstein-style comic book explosion. Titled Execution, this installation is one of Montreal artist Emmanuel Laflamme’s many allusion-heavy pieces currently on display as the pop-up gallery’s first-ever exhibit.

“It’s one thing to appropriate art and images, it’s another to make it your own.”

While idiphi repurposed an old building to showcase new art, Laflamme is doing the same with images he confronts every day. Hailing from the animation industry in Montreal, Laflamme is all too familiar with the power and efficacy of symbols to express meaning. “I try to find a language that [is] clear and accessible for people to understand and relate to,” Laflamme tells The Daily in an interview. “To me, all symbols have a very specific and personal meaning.”

In a piece called Survival of the Fittest, Laflamme manipulates the established cultural meaning of Mickey Mouse by forcing the familiar character into an unfamiliar context. On a large and imposing diptych, Laflamme stencils a hulking sewer rat caught mid-bite with the severed, yet recognizable, head of Mickey. Mickey’s decapitated body lies bleeding on the neighbouring canvas. The culprit is an obvious allusion to Banksy’s iconic Gangster Rat, popular for causing anti-state mischief all over the world.

Disney’s Snow White bites into a Macintosh apple, perhaps poisoned with the materialistic addiction that is endemic to Apple customers.

This piece is a bold comment on the distance between the two symbolic rodents. With a touch of humour, Laflamme pits the familiar mouse that embodies such tender childhood memories against the modern and subversive rat – with a clear winner. “It’s one thing to appropriate art and images, it’s another to make it your own,” Laflamme says. This piece reads as the perfect summation of the artist’s personal manifesto as both destroyer and creator of meaning.

With more clever pairings of familiar icons, Laflamme makes a vast range of popular images his own. The pop art styles of Andy Warhol and Keith Haring meet on Marilyn Monroe’s mechanically reproduced face as Laflamme replaces her eyes and nose with Haring’s famous cartoon humanoids. The result is both grotesque and intriguing, exploiting Warhol’s degenerating aspirations for the Monroe brand by layering Haring’s figures over Monroe’s arguably most recognizable features. The innocence of the two cartoon figures in place of the eyes reaching for one of Haring’s iconic hearts on Monroe’s forehead cleverly highlights their violent placement on her visage.

Laflamme is relentless in his innovation, as each pair of icons hits the viewer with another wave of shock, pushing us to reconsider how we understand popular imagery. Disney’s Snow White bites into a Macintosh apple, perhaps poisoned with the materialistic addiction that is endemic to Apple customers. Salvador Dali peeps out from behind a Batman mask in the absurd surrealist partnership titled Dark Knight Dali that he himself would probably endorse if he were still alive today. A hand-painted canvas of the famous Twentieth Century Fox logo declares “20th Century Fake,” boldly condemning Hollywood with its own symbols.

Surrounded by memes and minimalism, Laflamme cleverly crafts new meaning through unexpected mashups. Like his Banksy-style rodent, Laflamme dismembers the familiar icons we love and cherish. In a world where brands and icons pervade every aspect of our lives, Laflamme’s witty work is a crucial reminder to question everything.

Emmanuel Laflamme’s works are on display until March 29 at idiphi’s ephemeral gallery, located at 4517 Christophe-Colomb.