Simplified standing rules to be drafted for Winter GA 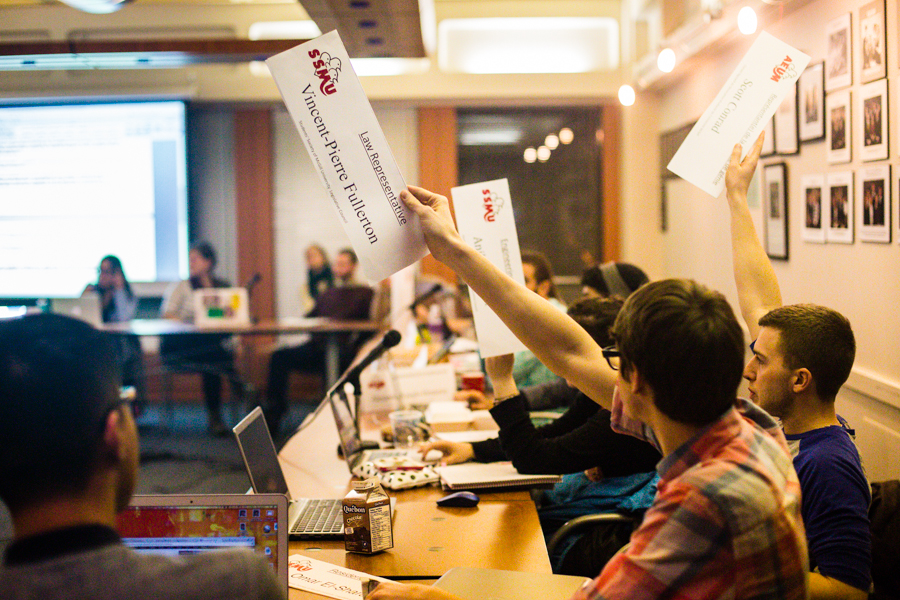 The Students’ Society of McGill University (SSMU) Legislative Council convened on February 12 to discuss the drafting of standing rules for the upcoming Winter 2015 SSMU General Assembly (GA) and the possibility of a new $2 fee levy in support of the ECOLE project. Council also voted to oppose the deregulation and increase of international tuition fees.

Writing to The Daily, Houston explained that the standing rules will be drafted by the president and the speaker, and ratified by Council in the coming weeks. “Ideally, any standing rules adopted for the GA would be to encourage […] full and free discussion and […] ensure that everyone, including a minority, has an opportunity to be heard,” he explained. “This could include changing the default speaking time […] to ensure that as many members are heard as possible, or rules designed to simply make it easier for members to understand what is going on.”

VP Internal J. Daniel Chaim opposed the motion, arguing that it was unnecessary as SSMU was already committed to accessibility and transparency at GAs. “I do understand the point about some people not liking the rules, but adopting standing rules is a scapegoat,” he said. “It’s not [solving] the issue.”

“We have to bear in mind that this motion was largely […] written with a constituent who felt that the last GA was not accessible, so it was supposed to address some of the issues that came out of last year,” said Rourke, defending the motion. “The GA is a really important forum for SSMU; it’s a really important part of our democracy […] so making it as accessible as possible to students is something I think we should all value.”

Rourke added that these measures would not solve all of the GA’s challenges, but would be “a considerable improvement.”
Despite the continued opposition of Chaim and VP Finance and Operations Kathleen Bradley, the motion passed by a significant margin.

Another motion concerned McGill’s ongoing efforts to deregulate tuition for all academic programs. Brought forward by a number of councillors, including VP External Amina Moustaqim-Barrette, the motion sought to resolve that SSMU officially oppose the deregulation of international tuition fees and condemn the administration’s lack of transparency and consultation on the issue.

Several councillors advocated tabling the motion until the upcoming GA, arguing that with such an important issue at stake, as many students as possible should be able to contribute directly to the discussion.

“I don’t think we can deny that this motion is something people are a little more divided about,” said Houston, speaking in favour of postponing the vote. “This motion in particular is something that affects different faculties in different ways, and consultation [with councillors’ constituents] is very important.”

VP University Affairs Claire Stewart-Kanigan disagreed, reminding councillors that this issue formed an important step toward SSMU’s mobilization against austerity. “If we’re talking about building solidarity with other Quebec universities, such as through the anti-austerity mobilization, supporting deregulation is directly affecting them,” she said, going on to argue that deregulation, and the tuition hikes that typically follow, render education increasingly inaccessible to lower-income students.

“While I do think that, under ordinary circumstances, this would be a very appropriate motion for the GA, the issue of timeliness is something that we should be considering,” said Stewart-Kanigan. “Given that the GA is going to be happening quite a lot later this year […] dealing with it now […] may be the more appropriate route.”

After more than an hour of deliberation, Council decided against tabling the motion, and it passed. The vote was taken by roll call at Houston’s request.

Council approved a Winter 2015 referendum question asking students to vote on a new levy of $2 per semester for ECOLE, opt-outable and renewable every three years. ECOLE, which launched its pilot year in September, aims to provide a socially and environmentally sustainable space for research and learning, and bring together sustainability projects from McGill and the wider Montreal community.

ECOLE co-coordinator Brooke Nancekivell explained that while the project has proved highly successful so far, its funding from McGill’s Sustainability Projects Fund (SPF) will come to an end in April. Having considered various alternatives, she said, ECOLE’s coordinators determined that a small student fee levy would be the optimal solution.

“In our question, we would be asking for three years of funding,” said Nancekivell. “We’re also saying that during that time we can explore other options […] so that hopefully we can [avoid putting] the burden of [high rent costs] on students.”

President Courtney Ayukawa supported the referendum question, and expressed disappointment that McGill’s administration had been unwilling to negotiate a lower rental fee for ECOLE’s facility, thereby placing the project under increased financial pressure.

Arts Senator Kareem Ibrahim brought forward an amendment increasing the proposed levy to $2.50, but this failed after a lengthy debate.