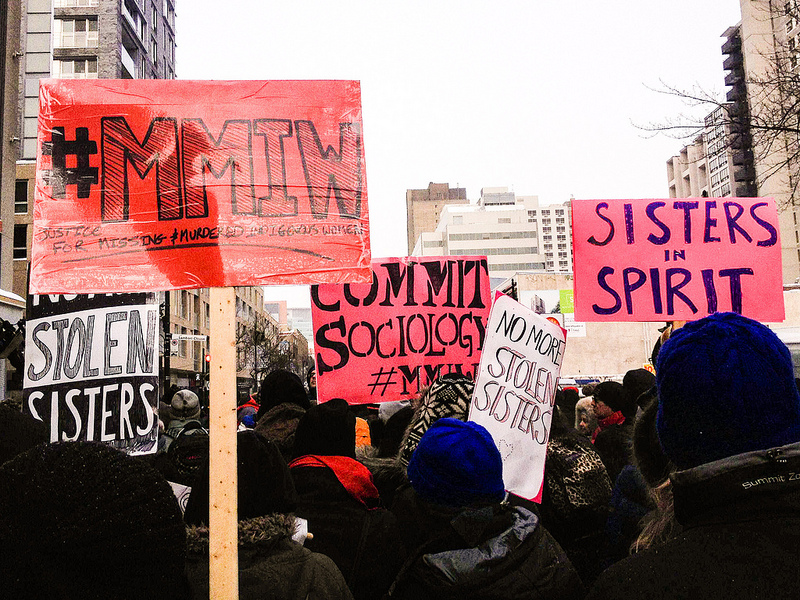 On Saturday February 14, hundreds of protesters marched in the streets of downtown Montreal as part of the city’s sixth annual Memorial March for Missing and Murdered Women. The march was held to remember and commemorate women of all backgrounds who have been murdered or gone missing, with particular emphasis on murdered and missing Indigenous women.

The first memorial march took place in Vancouver in 1991, organized by a group of Indigenous women and frontline workers. It initially started as a response to the failure of police to investigate the murder of a Coast Salish woman. Since 1991, the march has continued as a means of addressing the systematic violence against Indigenous women, pervasive across society and throughout the media landscape.

“If you’re silent, then nothing changes, so I think that the march is to remind the people that it’s not over […]”

Saturday’s demonstration began with performances of various groups as well as chants. Among the performances was a healing song performed by a group of women drummers called Odaya.

Monica Van Schaik, an organizer from Missing Justice, told The Daily that this year’s march was the largest so far. She added that while she believed the march was a good way to show support, it was not enough.

“I think I will only be able to say that enough awareness is being given to the phenomenon of missing and murdered Indigenous women in Canada when they stop going missing,” Van Schaik said.

The march also aims to highlight the lack of government initiative to investigate these crimes, a criticism that many Indigenous-rights activist groups have been voicing for years.

“As we see, the Harper government ignored this issue and refused to have a public inquiry, refused to put more funding into Indigenous-run and -led organizations [who were trying to raise awareness of the issue] and that makes this march and us being here today so much more important,” Van Schaik said.

One unidentified speaker at the march made references to the Chapel Hill shooting that occurred in North Carolina on February 10, noting that this march was also for other victims of racist violence.

Another unidentified speaker noted the significance of uniting the huge variety of backgrounds and perspectives of those attending the march.

She continued, “So my hope is that […] we can walk together today and that we can support one another in a unity that’s composed of unique and complicated realities.”

John Cree, an Kahnawake elder who does presentations at universities on Indigenous awareness, was a speaker at the event, and spoke to The Daily about the importance of the march in cultivating change.

“If you’re silent, then nothing changes, so I think that the march is to remind the people that it’s not over, it’s not a demonstration for one day, it’s a demonstration. […] We’re going to do until change is made.”

Van Schaik spoke to the significance of the event falling on Valentine’s Day, a day catered specifically to cherishing loved ones.

“They’re going missing, they’re being murdered. Violence is happening toward the women here in Canada and we’re here to say that that needs to stop.”