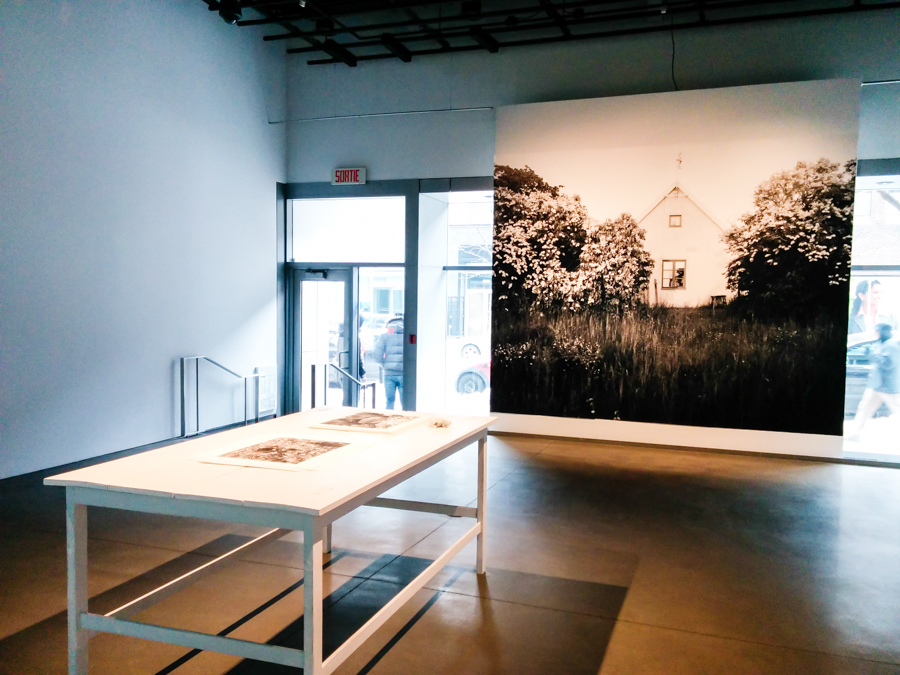 Sitting down to watch the news might not be as harmless an activity as we think. In Concordia’s FOFA gallery, Félipe Goulet Letarte presents “Political Poem / I Watch the News,” a performative installation. The showpiece is an ongoing project of the young artist that will be completed by the end of February. The piece illustrates Letarte’s experience with the news by showing how political messages constantly repeat themselves to produce a mind-numbing effect.

The installation plays mind games with the viewer. In the literal repetition of the same word over and over again on a piece of paper, the piece mimics the constant reiteration of obscure concepts in the news. Letarte is a central part of his own game – he comes to the gallery three times a week and stamps the word “Économie” (economics) as many times as possible on an A4 paper and hangs it on the wall against the black background of the room. Standing on a ladder, Letarte can reach the ceiling so that the whole space is filled with stamped pieces of paper, the walls gradually covered with “the political message.”

The numbing effect of watching the same word appear over and over echoes how we often fail to realize and acknowledge our mindless consumption of the information that media sources throw at us.

The Black Box, the room in which the exhibit is housed, draws all attention to the sheets of paper as they gradually emerge on black walls. Unless one stays at the gallery all day, it’s hard to notice the development of the paper-posting process. The numbing effect of watching the same word appear over and over echoes how we often fail to realize and acknowledge our mindless consumption of the information that media sources throw at us. Quite possibly, the overuse of abstractions like “economics” serves as a cloak to leave actual facts uncovered, and to avoid the discussions that matter. Talking to The Daily, Letarte revealed that the phenomenon of the word “economics” caught his attention in its use in news coverage as an empty explanatory device. In a world where excessive information constantly grabs at our throats, Letarte’s stamping actions are a bleak analogy for the senseless nature of this empty news stream.

The repetitive nature of the exhibit, while metaphoric, is also hypnotic. Letarte explained that words devoid of meaning can function as comforting answers to shocking events. But this empty comfort can be dangerous. Indeed, staring at the exhibit, one cannot see or think of anything but the pervasive and empty word on display. According to Letarte, once “economic problems” becomes the staple reply to all political questions, people start to use this phrase as carelessly as the media. Whether or not “economics” has truly become as all-encompassing as he paints it to be, Letarte’s work points to the danger in the subconscious imitation of “the political message.”

As bleak as it may be, Letarte’s creative representation of this experience does, however, offer a potential solution to this false consciousness: thoughtful reflection. The stark simplicity of the exhibit provokes a critical response to our unquestioning acceptance of the media’s obscure explanations. Repeatedly stamping the same word on the viewer’s mind in “I Watch the News,” Letarte snaps us out of thoughtless consumption and reminds us to keeps our eyes open.

“Political Poem / I Watch the News” is on display at the FOFA Gallery until February 20.