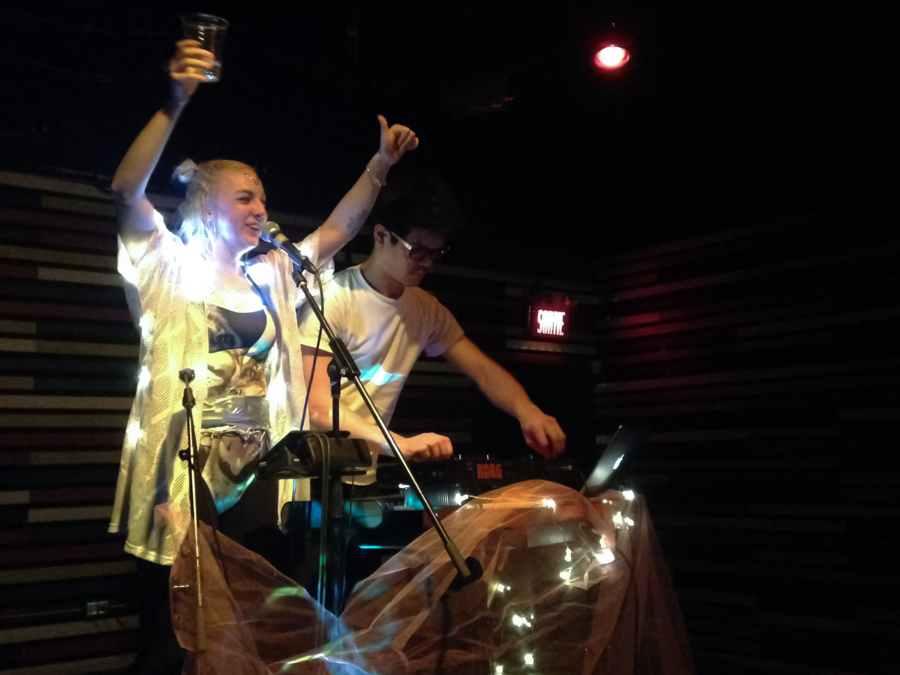 In recent years, the Canadian music scene has seen an influx of alt-pop and electronic music with women at the front, from Grimes to Braids to Purity Ring. At the forefront of this evolution is Lowell, a Calgary-born singer-songwriter whose talent for blending catchy hooks and powerful lyrics has earned her a reputation as a strong performer and producer. Lowell’s raw, grunge-pop aesthetic matches her upfront personality: the singer is known for being honest in both her music and her interviews, openly discussing her politics and her past. After dropping out of music school at University of Toronto, Lowell followed her own path, working as a stripper – her EP, I Killed Sara V., is named after her former stripper persona – and working on her music to get to where she is today. Speaking to issues of sexism and sexuality, her work serves to inspire listeners, and paints the picture of a fearless and talented artist with something to say.

Fresh off a tour promoting her first LP, We Loved Her Dearly (released in the fall of 2014), Lowell sat down with The Daily to give some insight as to what that something might be.

The McGill Daily (MD): Did you always know that you wanted to go into music?

Lowell (L): I was sort of a late developer in a lot of different ways. […] The only thing I was good at for a long time was music. That just made [me] more confident, and then I started getting interested in other things and realized I wasn’t as stupid as I thought I was.

MD: So you were doing writing before you started putting out songs under your own name, right?

L: I would say that they coincided. I did writing for other people and at night I would work on my own things.

MD: Do you have a preference?

L: It kind of just depends on my mood. What comes the most naturally is doing my own music. […] but it can be really difficult because when you’re releasing something under your own name it means more to you; it represents who you are as a person. So every song that you make is like a boyfriend you bring home to your family. […] To continue with that analogy, writing songs [for other people] is like bringing your friend home to your family.

L: Less commitment, yeah, I would say – not less difficult. It’s actually super challenging. […] It’s very psychoanalytical – I have to get into another person’s head. […] It’s kind of creepy actually. […] In a world where there’s supposed to be no rules, there are a lot of rules, and it’s almost like a puzzle trying to figure out how to balance those things.

MD: Do you find some of those rules challenging when you’re trying to do your own stuff?

MD: So where do you draw some of your inspirations from when you’re writing?

L: Movies are great. I get really inspired when I watch Tarantino films. […] But then from that, I always draw from my own experiences. This album is 100 per cent a diary. […] I mean it’s really hard because when you love movies and you’re a girl there’s not a lot of characters that you can reach for, so I go to Tarantino because he always just has normal, badass girls that you can look up to and fantasize about being.

MD: Do you find that as a woman you’ve faced any challenges in the industry?

L: Yeah, for sure. There are a lot of reasons why it’s hard. There are deep-rooted things, there are the ways people treat you, the ways you think people should treat you.

Actually, recently I met a house duo called Rebecca & Fiona, from Sweden. This is what I’m saying about expectations – I met them, they have a super cool image, they look amazing, everything they’re doing is really cool. […] They were working on some new material, and I was like, “Cool, who does your production?” I would’ve never asked that to a guy. I’m guilty of it too. […] And I know people have done the same thing to me.

MD: A lot of your music has these themes in it, especially feminist themes. Do you think it’s important for music to be political?

They were working on some new material, and I was like, “Cool, who does your production?” I would’ve never asked that to a guy. I’m guilty of it too. […] And I know people have done the same thing to me.

MD: And you find that you can express that through music?

L: Yeah, I do. I think that when I was in grade 12, maybe first year, I told my dad I wanted to go into politics. […] I think I told him in an adorable way: “Dad, I’ve realized that Taylor Swift has so much more pull than Stephen Harper.” […] Obviously he has [real power]. But artists are people [who] have control over how we think in general.

MD: So We Loved Her Dearly is your first album; how was it, being able to put that out – how different is it from doing an EP?

L: Actually, I’d already written the whole album when [I Killed Sara V., the EP that preceded We Loved Her Dearly] came out, so it was all just one process. But one thing about putting the EP out before the album was that it gave me time to reflect on the whole album. When I released I Killed Sara V. I was really only just then approaching the idea of being open about the fact that I used to be a stripper, and I thought it was a cool way to just own it and make it sort of a political statement. […] In that time I was like, I Killed Sara V. is a cool concept – I killed my past – but that almost represents me being ashamed of something and having freed myself from something I was ashamed of. In the time [between when] I released I Killed Sara V. and the record, which was only six months, I came up with the idea of We Loved Her Dearly because I realized that I shouldn’t really be killing her, and that it was really something that I was proud of and that I would miss – which in the end just makes it more of a political statement. It represents what society was making me feel like I had to do, and it was just this crazy process of me finally realizing who I am.

MD: So you did [your recording] in London. How do you find it different working in different areas? What do you think of the Canadian industry, the Canadian music scene?

I came up with the idea of We Loved Her Dearly because I realized that I shouldn’t really be killing her, and that it was really something that I was proud of and that I would miss – which in the end just makes it more of a political statement.

L: We have a really cool grant system in place in Canada, and I think that it’s an amazing platform for artists – specific artists that are involved in a certain community, which is awesome.

Because there’s a platform that is grant-worthy, it requires a certain sound. And that’s Canadian and I love it, it’s like Tim Hortons or something. […] But with that, it means that actually, some artists that are really alternative or really interesting have to compete even harder, because they’re not getting any sort of attention financially. […] So unfortunately it just means that they have to leave for awhile and then come back.

MD: What kind of experiences do you think your music speaks to? Do you have a certain audience in mind?

L: The thing is that I’m just super honest in my music and my interviews. In some way, that allows my music to speak to everyone. What I really do is speak out honestly about taboo subjects that I, as a normal person, have experienced and I’ve felt that a lot of people want to talk about but they don’t know how. I almost think that anybody can relate to that – we’re all sort of stuck in these parameters of how we’re supposed to be. In my mind I want to be like, ‘I speak to young girls,’ because I want girls to not feel like they have to be these perfectly-picked flowers that society wants to see. But that can speak to anybody, really – we all feel pressure to be perfect, to display ourselves in a certain way.

– This interview has been edited for length and clarity.