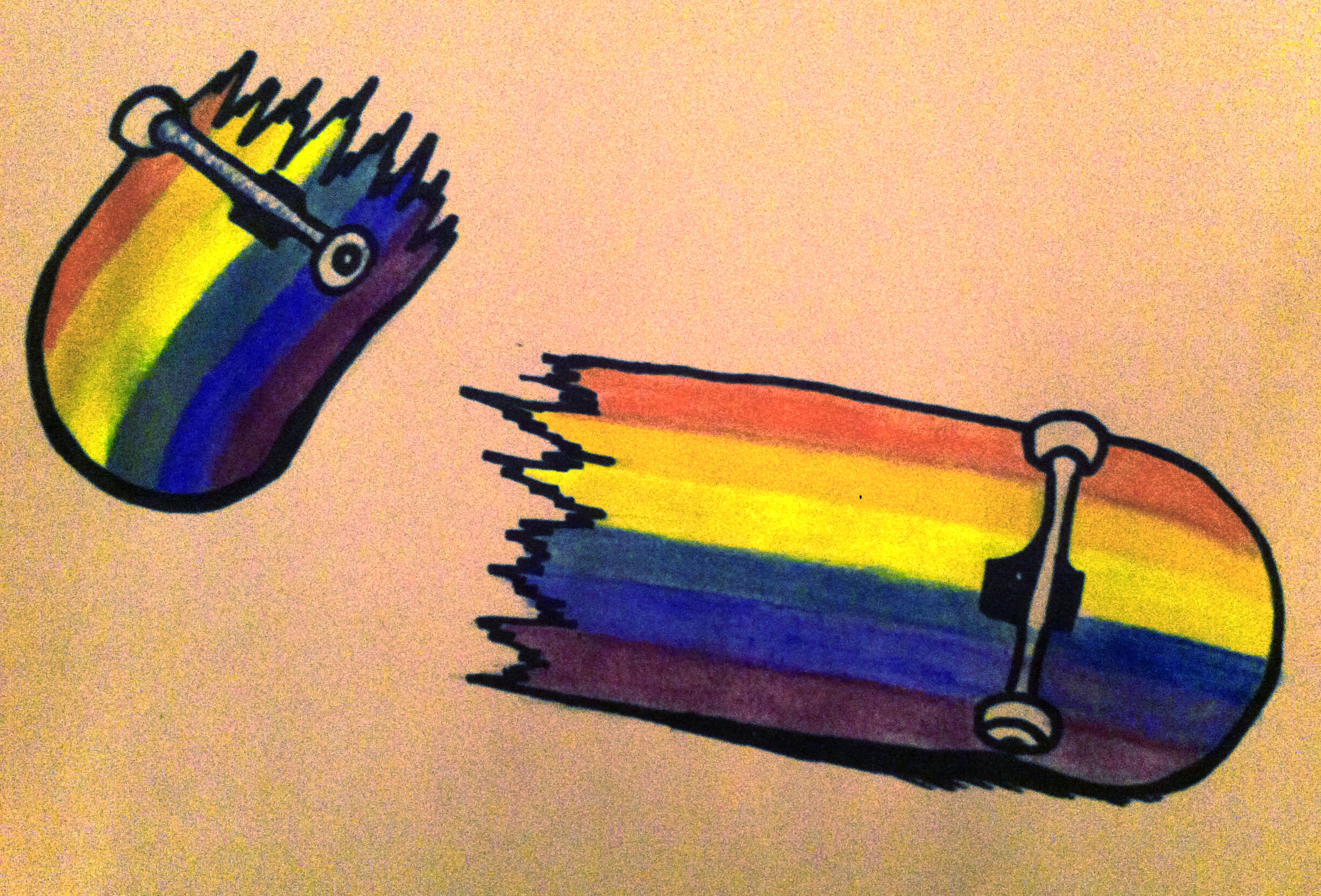 Skateboarding is a sport that was born out of a counter- culture – one that belongs to people who were incessantly hounded by jocks, people who did not fit in the cafeteria, and countless other cliches that I’m sure people always hear when they start looking into counte cultures. Another common cliche is that skateboarders form a family of outcasts; your local crew of skaters becomes a second family. Personally, I have been skating since I was 12, and this is how it was for me. However, one important critique must be made: although a tight-knit community of outcasts is formed through their shared love for skating, this community is exclusionary, because it is so rampantly homophobic.

Homophobia has been an omnipresent force in skateboarding since the urethane wheel was invented. Some of the most revered pioneers of the sport, such as the late Jay Adams, helped foster this homophobic culture in skateboarding from its inception. Yet despite this, he never faced criticism because of his ‘legend status.’ Here’s a fact most skateboarders don’t know: in 1982, Adams started a fight with a man named Dan Bradbury in an incident that Adams later described to Juiced magazine “We went to a place called the Okiedogs and two homosexual guys walked by and I started a fight. That’s just how every fuckin’ night was for me back then.” Bradbury died that night in the fight. Adams said he left before the man was dead, and only served six months in jail. This year he was honoured at the Transworld Skateboarding Awards, and he has also been called the “spark that started the sport.”

However, individuals are not the problem; it’s bigger than that. It’s about how the sport reacts toward diverse sexualities. An example of this is Tim Von Werne, who used to be a pro skater. In 1998, his career was cut short after his sponsor pulled an interview where he talked about his sexuality. In most skate interviews you will find sexist, racist, and homophobic remarks, yet it seems there is no room in skateboarding to have a candid discussion about sexuality without the person being ostracized.

Skateboarders latch onto the fact that it is a sport run by skateboarders – we want to have board companies owned by skaters, our media in the hands of skaters. In short, we want to be a community that makes its own choices. It breaks my heart to see that the community that I have identified with my whole life, the one that helped me through the hardest parts of high school, the one that gave me the inspiration to beat cancer, and the one that I truly love, has such a deep legacy of hate, and holds a hateful man as a legend. It is shameful.

As skateboarders, we are quick to defend our own. We assume that if someone is a skateboarder, they have endured enough social isolation. This is false. It is true that skateboarders come from all sorts of backgrounds, with a varying range of privileges and opportunities, but none of this is an excuse to engage in hateful behaviour. Period.

Homophobia was not relegated to just a dark chapter in skateboarding history. It would be false to say that we have come to terms with this history while acknowledging our oppressive behaviour. We should be continuing to practice good allyship by actively working to be a more inclusive sport. Some skaters will say, “Hey, I’m not homophobic, this is not my problem.” Unless you are actively challenging this hateful behaviour, your complicity is part of the problem.

If you go to any skate park, you will hear kids of all ages yelling homophobic remarks at their friends. It has become so ingrained in skateboarding vernacular that it is not uncommon to be reading an interview and see several homophobic remarks. One skateboarder that is a perfect example of this is Forrest Edwards, who became infamous after participating in a video contest called “Slap’s One In A Million” – comparable to skateboarding’s version of American Idol. Edwards was filmed repeatedly making unapologetic homophobic remarks about other contestants’ behavior, and even took it as far as their selection of tricks. However, his homophobic behaviour was never called out because he is an incredibly talented skateboarder, who has not only been given a pro model board, but has received a fair amount of media coverage. Homophobia in the skateboarding community is so normalized and accepted, that hateful slurs have no impact on peoples careers.

When you’re a kid and you fall in love with skating, you really do go head over heels. You pick up all the magazines and all the videos and try to imitate your favourite skaters’ behaviours. It is not uncommon to even try to mimic your favourite skater’s diction. When young skaters see this language though skate media, they think it’s okay, and in some cases even add the slurs into their vocabulary because they think it’s cool. This all serves to reinforce this hateful culture.

Since this homophobia is never called out, young skaters grow up thinking it is normal to use homophobic slurs. These young skaters become old skaters and never learn that the language they use is hurtful. The sad truth is that a skate van is no different from a locker room, except instead of Gatorade bottles, there are beer bottles.

Why do we tolerate this behaviour? If we are as free-willed as we claim to be, shouldn’t we also use this free will to break the mold of sports culture and be progressive? I truly believe that change can be made. In fact, we have already seen a few people within the industry take a stand against this homophobia. Robert Brink, a skateboard journalist, has taken a stand multiple times against homophobic language and also strives to raise awareness, while Nike SB pro Stefan Janoski released a ‘Be True’ colourway of his pro model shoe, with proceeds going toward the LGBT Sports Coalition to support the goal of ending discrimination in the sport. Another example is Alex Olson, a pro skater, who owns his own board company called Bianca Chandon, and who released a board series called the House of Bianca, which is a tribute to ball culture. The money from the board sales will goto help the Hetrick-Martin Institute to help LGBTQ youth. It is clear that some people in the skateboarding community are starting to call out the behaviour of their peers, and it is through this that the skateboarding community will hopefully shed its homophobic ties.

It is time to change. We as skateboarders are in a unique position, where we actually have a great deal of agency. It is time to end this homophobic culture and become what skateboarding was always meant to be – a culture where no matter who you are, if you love to skate you will be welcomed with open arms.