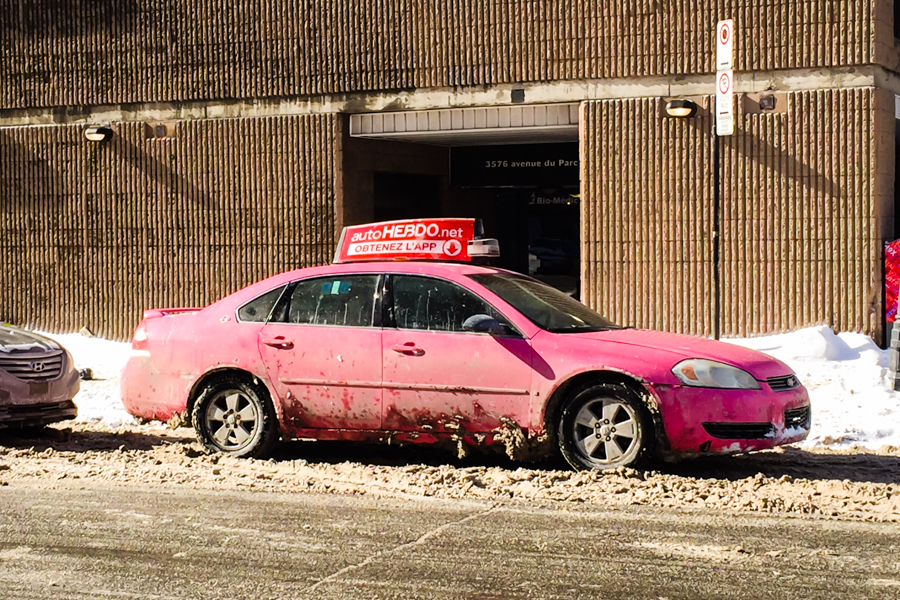 “Carry a large handbag because that is the best defence of all, with which to smack any unwanted assailants,” Kirsten Humbert explains to The Daily, in character as Dorcas, one of the ladies from LadyCab. In addition to playing the role of Dorcas, Humbert is also one of the creators of this new Montreal-based web series, along with Tessa J. Brown and Marianne Trenka, who play the roles of Emily and Florence respectively. The show is a political satire that “highlights the obstacles that women, trans people, and gender non-conforming people face in day-to-day life,” particularly with regard to cabs and public transport.

“You could fill it with something heavy but lady-like, perhaps tiny bricks shaped like lipstick,” Tessa Brown helpfully chimes in as her character, Emily.
“But it should be not heavier than a baby, because a lady should never carry anything heavier than a baby,” Humbert nods. Their fake posh accents veil their witty sarcasm.
Mainly shot in the back of their ‘LadyCab,’ the web series was created in response to the police reaction to a number of incidents where women were sexually assaulted in Montreal cabs, which involved telling women to “limit their alcohol consumption and stay in control” and not take cabs alone at night. While the series clearly positions itself as a reply to this incident, its purpose goes beyond the one issue.

The three main characters – Dorcas, Emily, and Florence – are old-fashioned, traditional ladies who run their LadyCab as a service for “proper ladies, who have proper lady reasons for being out.” Their proper reasons include “buying biscuits or better yet, buying things with which to make biscuits.” As Dorcas, Emily, and Florence attempt to navigate the Montreal streets in their LadyCab, they ask passengers about their experiences of harassment in public spaces or taking cabs.

Meanwhile, the satire also makes fun of outdated stereotypes about ‘proper’ women, as the three ladies are constantly astonished by the ‘modern’ ladies they drive around, and their unladylike notions about “bodily autonomy” and safety in public spaces. The hyper-posh characters are a satirical criticism of the view of women as delicate or helpless creatures.
All three creators and LadyCab hosts have a background in performance, be it stand-up, improv, or burlesque. As such, the over-the-top personas of the LadyCab characters came naturally to them. According to Brown and Humbert, their characters are the result of watching “way too much Little Britain” and Monty Python.

Discussing the characters with The Daily, Brown explains that “when it comes to satire, when it comes to what we’re responding to – which is the suggestion that we can’t go out late at night, we can’t have drinks with our friends, we can’t be out alone without protection – well they’re the sort of ladies that never dream of doing such things, oh my!”

Humbert points to the importance of satire as an alternative approach to politics, explaining that she found it refreshing to embody the character of these ‘proper ladies.’ “I personally was tired of being the shrill, angry feminist,” she says, “just shrieking at people and having that shriek be so high-pitched that it goes above most people’s hearing range.”
According to Humbert, LadyCab seeks to “raise awareness and educate people not only in the area of sexual assault, but more broadly just gender equality and respecting other people as human beings, no matter how you perceive their persona.”

The series, which has now released 13 episodes on YouTube, features different guests in each ride. The passengers of the LadyCab are a variety of modern ladies: Seska Lee is a burlesque performer and cabaret producer; Connie Lingua is an interdisciplinary drag artist. The cab plays host to women-identified and gender-non-conforming persons. This variety allows the show to explore the views of all types of ladies, which Brown explained is only growing. “We’re really trying to get more diversity in term of the experiences, in terms of the lived experiences of the people in the cab, so we don’t want to just be getting white, cisgender, heterosexual ladies in the cab.”

Beyond the diversity of real issues and experiences that LadyCab brings to light, the web series is wonderfully funny, as Dorcas, Emily, and Florence teach their audience how to be a ‘proper lady,’ and in turn learn from their more ‘modern lady’ passengers. They scheme up impressive ideas such as “Lady-only streets,” which, in one episode, Emily excitedly explains will make us “separate but equal!”

The juxtaposition between the ‘proper ladies’ who host LadyCab and their modern passengers forces the audience to realize how laughable gender stereotypes are, especially when we try to impose a standard idea of femininity across the broad and ever-growing spectrum of what a ‘lady’ can be. As Dorcas, Emily, and Florence discuss how to be delicate and not bothersome, it brings to light the contradictory elements of safety advice given to women. Lady-only cabs and lady-only streets not only isolate and segregate women, but also reaffirm the negative idea that men are dangerous and that it’s women’s responsibility to keep themselves from getting hurt. With their tongues in their cheeks, LadyCab addresses these issues head on.

The series mixes important harassment and gender issues facing the ladies of Montreal with a comedic touch to highlight the ridiculousness of anyone who tries to deny these ongoing problems. LadyCab is driving through Montreal, running over stereotypes and discrimination with some proper laughter, tea, and biscuits.