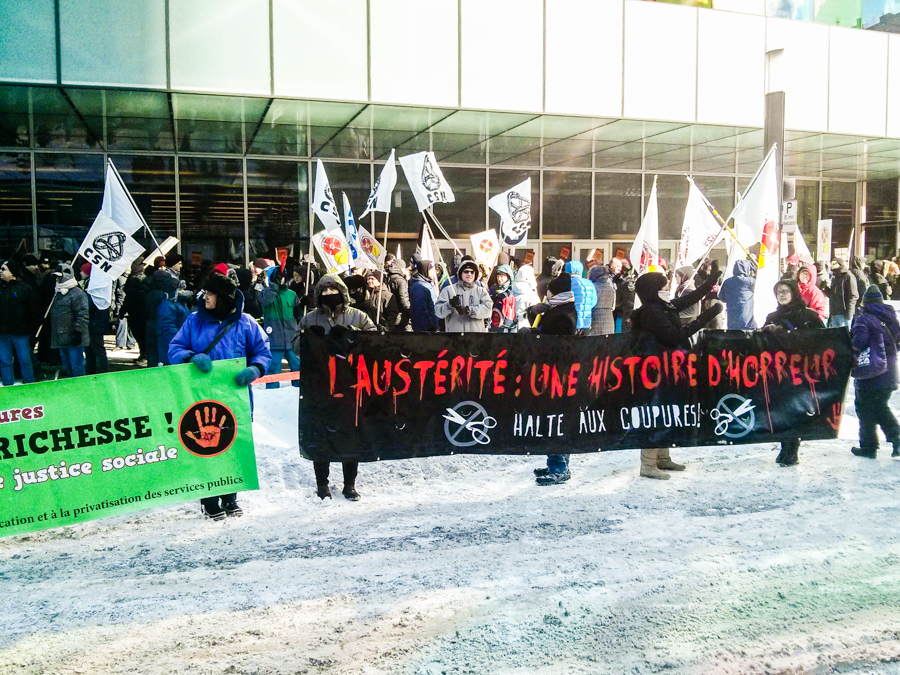 A crowd of roughly 400 protesters gathered on Tuesday morning in front of the Palais des congrès, where Quebec Premier Philippe Couillard was scheduled to give a speech outlining his economic plans for the province.

The demonstration brought together representatives from numerous unions and organizations, from midwives to ecologists to public service employees. Despite their diverse mandates, these groups stood united in their condemnation of the Couillard government’s austerity measures.

“This is more of a visibility action,” Martin, a member of Industrial Workers of the World, told The Daily. “We have to be represented wherever the [premier] is going to move, because […] the Printemps 2015 [movement] is going forward, and we hope to achieve something with that.”

Despite the relatively heavy police presence in front of the Palais des congrès, Martin said that he wasn’t concerned about active repression from the SPVM.

“Mainstream unions are there, and [police violence] never happens with them,” he said. He added that, in fact, as city employees, Quebec police have reason to be sympathetic to anti-austerity protesters, as their pensions have been negatively impacted by Bill 3, adopted in December.

“What I’m afraid of is that people don’t realize how big this cause is.”

Although union members formed the bulk of the crowd, a small number of students were also present.

“[As students, we must] show that we’re part of the mobilization,” explained a student from Cégep du Vieux Montréal who preferred to remain anonymous. “What I’m afraid of is that people don’t realize how big this cause is. In 2012, it regrouped a lot more people, because it touched especially our bank accounts. But when you don’t see the numbers adding up […] people don’t realize how it’s going to affect them. So yeah, it’s difficult [to mobilize students].”

Concerning the SPVM, the student echoed Martin’s guarded optimism. “I’m not pro-police, since what happened in 2012, and since the repression that’s been continuing again and again, but I don’t think it’s the time to hate people who fight against the same people as us. Maybe they don’t fight the same way, but […] they don’t seem really confronting today.”

The variety of participating organizations demonstrated the far-reaching impact of austerity measures in Quebec. Representatives from the Comité Logement Ville-Marie, a housing advocacy group, protested cuts to their foundation’s budget. Two midwives from the Centre de santé et de services sociaux (CSSS) Jeanne-Mance explained to The Daily that their profession was marginalized in the Couillard government’s Bill 10, which denies midwives representation on CSSS boards of directors.

A member of the Réseau québécois des groupes écologistes (RQGE), a network of environmental activists, voiced his concerns over the environmental impact of austerity policies.

“Austerity measures in Quebec are just part of a long history of privatization, and basically sustaining the economic model in place, which sees the environment as just some kind of piggy bank,” he said. “And at the same time, they’re cutting into social programs […] and the funding of our groups.”

The RQGE’s goal, he explained, was to raise awareness of ecological issues within Quebec’s anti-austerity movement, with the hope that a successful general strike would also bring about positive environmental change.

The demonstration lasted for about an hour, drawing to a close around 12:30 p.m. with brief statements from the main coalition partners of the Printemps 2015 movement. These included advocates for social housing, gender equality, the elderly and the disabled, students, and various major unions. All expressed determination to continue the struggle against austerity, each speaker ending with the defiant words “Couillard, on ne se laissera pas faire! [We won’t let you get away with this!]”