Canadian content matters and Netflix needs to be regulated 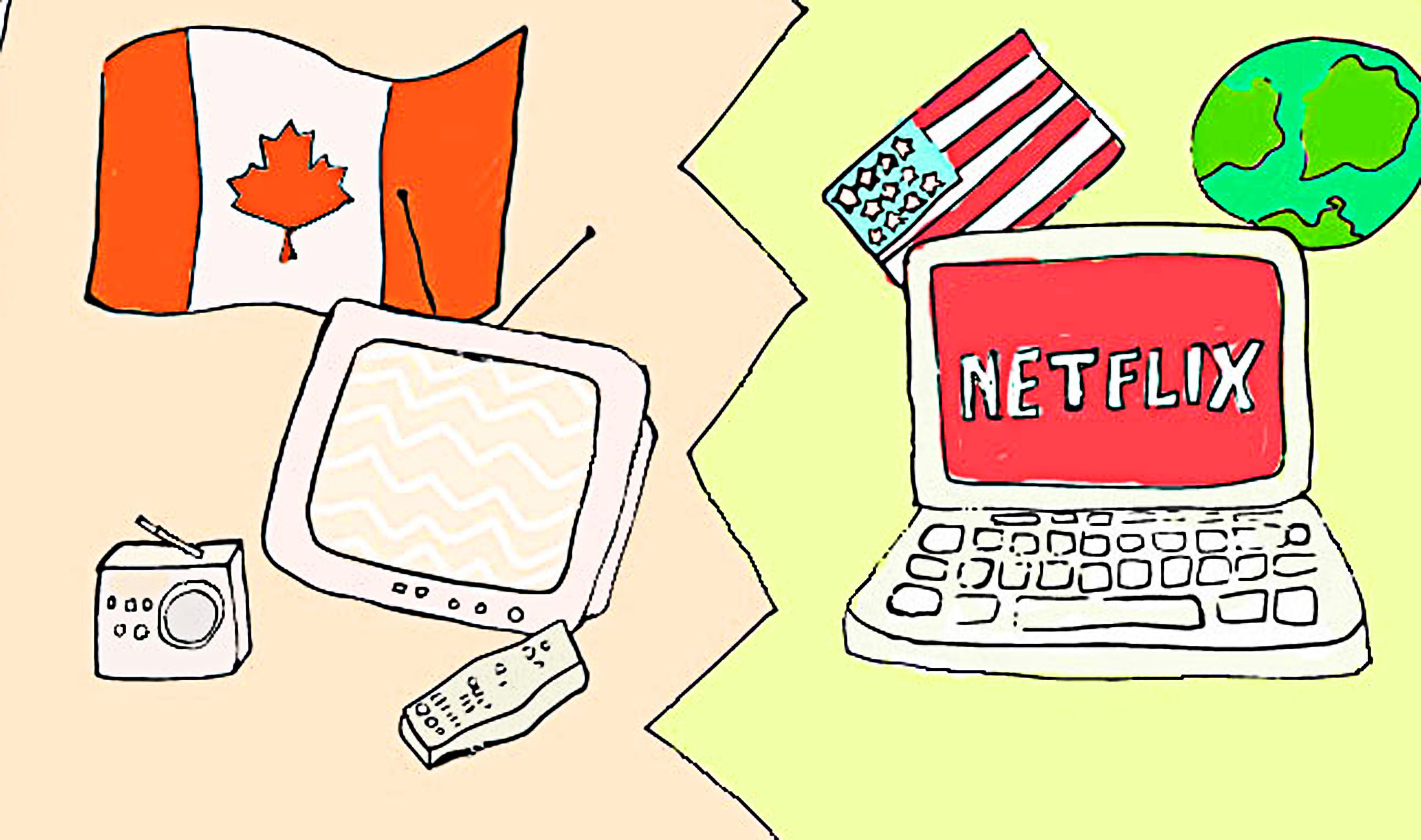 Government organizations, outside of those known to us by our required interactions with them, do not get much credit. I suspect most of us would raise our eyebrows at someone handing out flyers in the metro about the Canadian Radio-television and Telecommunications Commission (CRTC), wondering why they should care about a government regulator. From governing the way radio and television is broadcast to the speed of internet connection, the CRTC’s responsibilities address more than just the technical components of our access to media – they shape its content as well. Or they used to, at least.

Currently, commercial radio and television face varying requirements in terms of playing Canadian content. 35 per cent of popular music content on commercial radio must be Canadian, while for television broadcasters the requirement is 55 per cent. New media outlets, however, put this system in question. When the CRTC recently requested access to Netflix’s information, it received a clear no, sparking a debate among Canadian cultural commentators. The question at the core of this dispute has been the ability of a government regulator to ensure a minimum level of Canadian content in Canada. But is this goal still valid in 2015 – does Canadian content even merit protection?

Canada’s Broadcasting Act sets out the CRTC’s mandate as “serv[ing] to safeguard, enrich and strengthen the cultural, political, social and economic fabric of Canada” while also “encourag[ing] the development of Canadian expression […] that reflects Canadian attitudes, opinions, ideas, values and artistic creativity.”

Although these goals might appear admirable at first glance, underneath the fluffy language, not much is actually being said. What are the Canadian “attitudes, opinions, [and] ideas” in question, and who gets to define them? Broad themes of being overly polite and non-confrontational, such as those depicted in Canadian ‘classics’ like Little Mosque On The Prairie undoubtedly look nice on screen, but in reality present little of the critical self-reflection that Canadian content in a democratic society should provide. When the Minister of Justice conflates terrorism with ‘culture,’ folksy sitcoms on Canadian diversity run threadbare.

It’s only sensible that Netflix should be obliged to give back to the society that it so readily profits from.

The best screen content coming out of Canada is often independent, usually avoiding stereotypical Canadian narratives to tell stories that run deeper. These narratives comes from outside of the large networks. Quebec is a hotbed for such successful, creative content: 19-2, 30 Vies or productions by Xavier Dolan, Denis Villeneuve, and Denys Arcand to name a few. These widespread films have gained critical acclaim in Canada and abroad for their evocative and critical portrayals of Canadians and Canadian life.

To say that English Canada lacks good filmmakers is nonsense: local films like My Winnipeg or short films like The Chaperone similarly shape our perceptions of what we think of as ‘Canadian.’ Rather, what’s clear is the lack of investment in local productions, as opposed to attempts at bland mainstream shows like the new CBC sitcom Schitt’s Creek.

The advent of the internet has, in many ways, been a huge help to local works, as new media provides more accessible avenues to produce and distribute content. When Netflix argued that it need not subject itself to CRTC oversight for online video broadcasting – as it did this past fall before a CRTC commission hearing – its words rang hollow. With millions of Canadians using Netflix, a company that doesn’t pay a dime in HST or GST or contribute to Canadian productions in any meaningful way, it is difficult to imagine that it is under no obligation to support local filmmakers and artists producing Canadian content. Online giants embody the same monopolistic qualities that the CRTC strives to regulate in terms of other service providers – it’s only sensible that Netflix should be obliged to give back to the society from which it so readily profits.

The best Canadian television content comes out of local directors and actors that receive little exposure on the larger media circuit run by the big networks. This is a mistake. One such example is Orphan Black, a sci-fi drama written, filmed, and produced in Toronto, as an example of high- quality television made in Canada and produced by BBC America.

The best Canadian television content comes out of local directors and actors that receive little exposure on the larger media circuit.

The investment in and development of shows like Orphan Black speaks to the quality of ‘made-in-Canada’ productions that the CRTC content restrictions indirectly facilitate. If they were to foster a space for Canadian productions, larger networks would gain this pool of talented filmmakers, directors, and producers to draw from. Protecting and supporting our local artists, screenwriters, and producers is a win-win situation, even for Netflix – the more quality content is produced, the more quality content Netflix has to distribute. Canadian networks may complain that they cannot afford to support locally-grown content in a competitive field of content providers, but the issue is a circular one: without exposure, Canadians are less likely to know what’s being created in their own backyards.

Ultimately, Netflix’s ability to provide Canadians with access to different media content is simply the next step in commercial broadcasting. The CRTC does not and should not constrain Netflix – this would be both overly restrictive and beyond the mandate of the CRTC itself, to facilitate, not control, Canadians’ access to online media. Rather, it’s the role of intermediaries like Netflix, Google, and large Canadian networks to invest in the type of local content that demarcates us in a globalized and intertwined world. These filmmakers’ stories provide alternative narratives; they show us parts of Canada that some of us might never otherwise know.

Individual Canadian viewers, of course, are the final arbitrators of what is considered worthy television to watch – American, Canadian, or the like. The protection of Canadian content should not constrain this selection process, but rather add to it with content that would not be generated otherwise. The current system needs to evolve to better capture the core of Canadian content – the local talent that is driving it forward. It’s seems only reasonable then, Netflix included, that we all do our part.