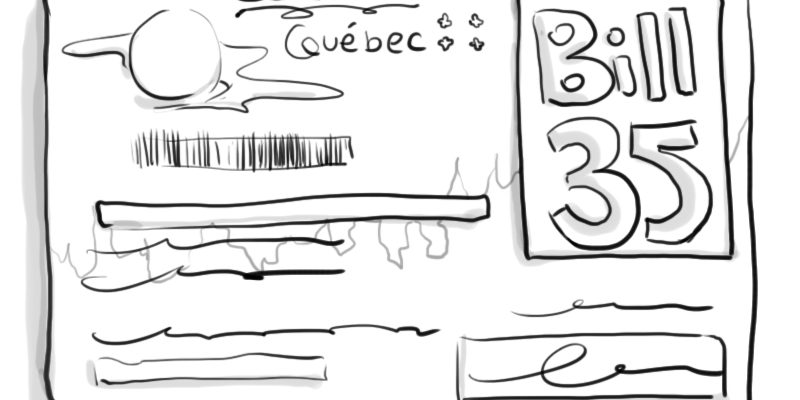 The passing of Bill 35 in December 2013 eliminated the requirement for trans people to undergo sex reassignment surgery before being able to change their gender markers on legal documents. However, over a year later, the government has failed to provide the regulatory framework required to implement legal changes, meaning that the surgical requirement is still effectively in place. This requirement is harmful to trans people, and as long as it remains in place the Quebec government is perpetuating transphobia.

Further to reinforcing the arbitrary societal link between reproductive organs and gender, reassignment surgeries are risky, expensive, and can lead to sterilization. Many trans people have no desire for these surgeries in the first place. Currently, without reassignment surgery, people must possess identification documents that do not correspond with their gender identity. Incorrect documents can reveal trans identities in any situation where ID must be shown – schools, places of work, even the SAQ. The very slow process is not just a bureaucratic annoyance – as long as the bill is delayed, trans people remain in danger.

On December 17, the government published regulations that put forward new requirements to replace those struck down by Bill 35. The new requirements state that those wishing to change their gender markers must live under the appearance of their requested gender for two full years, and that this must be corroborated by someone who has known them for those two years. These regulations have been heavily criticized by members of the trans community, who argue that to force people to live under a certain gender full-time without having the paper documentation to back up their identity would put them at increased risk of discrimination and violence. The regulations also stipulate that the person must be evaluated by a physician, psychologist, psychiatrist, or sexologist who can confirm that their gender identity does not correspond to the gender that appears on their legal documents. This reinforces the notion that a person’s gender must conform to a binary standard set by medical professionals, but also that trans identities are medicalized illnesses or disorders.

Changes need to be made in order to allow trans people to change their gender markers without undergoing surgery, but the current changes proposed still create a number of hurdles that harm trans people. Identification documents should reflect our identity, a privilege that right now only applies to cisgender people. The proposed regulations threaten trans people, forcing them to conform to the appearance of one gender or another in a constructed opposition. No one should have to fear violence and discrimination when they present an ID card.

It's easy! You can email the editors at commentary@mcgilldaily.com!