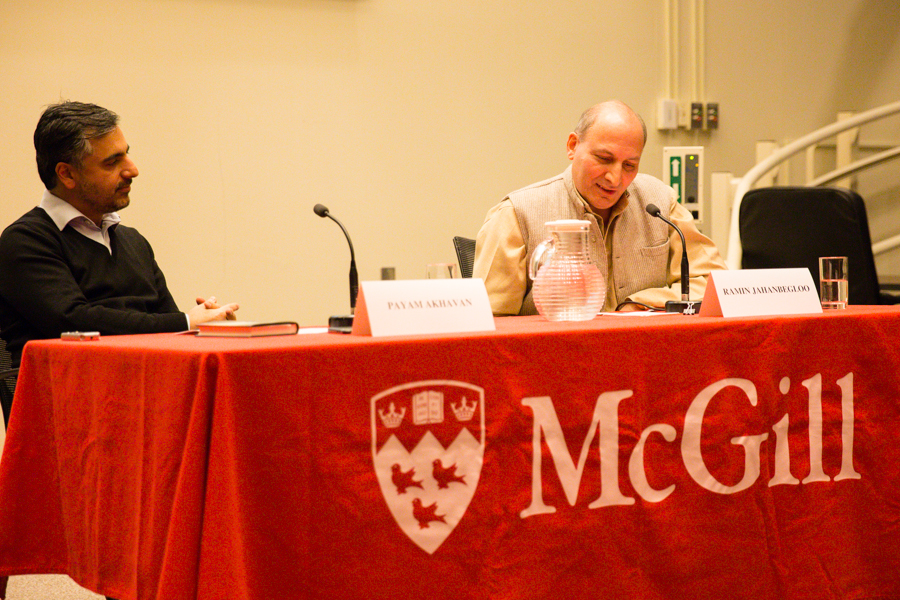 Ramin Jahanbegloo – intellectual, philosopher, and former prisoner in Iran – officially launched his book, Time Will Say Nothing: A Philosopher Survives an Iranian Prison, at McGill on January 19, Martin Luther King Jr. day. The event was hosted by the McGill Centre for Human Rights & Legal Pluralism.

The centrepiece of the event, and the main subject of Jahanbegloo’s memoir, was his harrowing experiences in section 209 of Iran’s infamous Evin Prison where he was detained for four months in the summer of 2006, under the rule of former Iranian President Mahmoud Ahmadinejad.

Jahanbegloo was imprisoned for allegedly conspiring with other countries with the intention of causing a “soft overthrow” in Iran, among other accusations. Jahanbegloo denied this accusation, noting that it was incompatible with with his philosophy of non-violence.

“Non-violence actually tells you how to fight for justice not only in the books and going to tribunals […] but at the same time through educating the citizens,” said Jahanbegloo, emphasizing the need for critical thought.

Jahanbegloo emphasized his struggle in day-to-day solitary confinement, which he said increased the risk of “losing your mind.” Jahanbegloo’s only connection to the outside world was access to a rooftop terrace during a weekly 15-minute break, and he also had access to a few philosophical texts. “[I would] read out loud […] to hear myself speak,” he said.

“Non-violence actually tells you how to fight for justice not only in the books and going to tribunals […] but at the same time through educating the citizens.”

Jahanbegloo also spoke of his experience being interrogated while in prison, describing being blindfolded during interrogation and being continually under heavy pressure to make false confessions. Not being allowed a lawyer or any outside contacts, he eventually confessed to false claims.

“In a country where having a law doesn’t mean anything,” Jahanbegloo said, “there is no way to defend yourself against a system like that.”

Jahanbegloo’s confession was ultimately not used against him after international pressure and UN-led negotiations resulted in his release.

Jahanbegloo said that despite his experience, he remains faithful to his philosophy of non-violence.

“I am even more convinced of non-violence,” he declared. “It is the most pragmatic response to violence in our societies.”

Some audience members found Jahanbegloo’s call to question ideas very applicable to their own circumstances. “We are inculcated in law in a certain way without questioning,” Amanda Ghahremani, a third-year law student and one of the event’s organizers, told The Daily. “Law isn’t just about what’s in the books, but is also about how people organize themselves and how people live.”

Arash Aslani, an Iranian who was held and tortured at Evin Prison for two years before coming to Canada in 2004, where he was detained at Laval’s Canadian Immigration Prevention Center for 11 consecutive months, concurred with Ghahremani’s interpretation of the talk.

Having had his own experiences of discrimination from the Canadian government, Aslani said he does not live under an illusion of security and freedom granted by the government.

“Trust in the government is the worst,” Aslani told The Daily. “Always question; don’t just accept.”