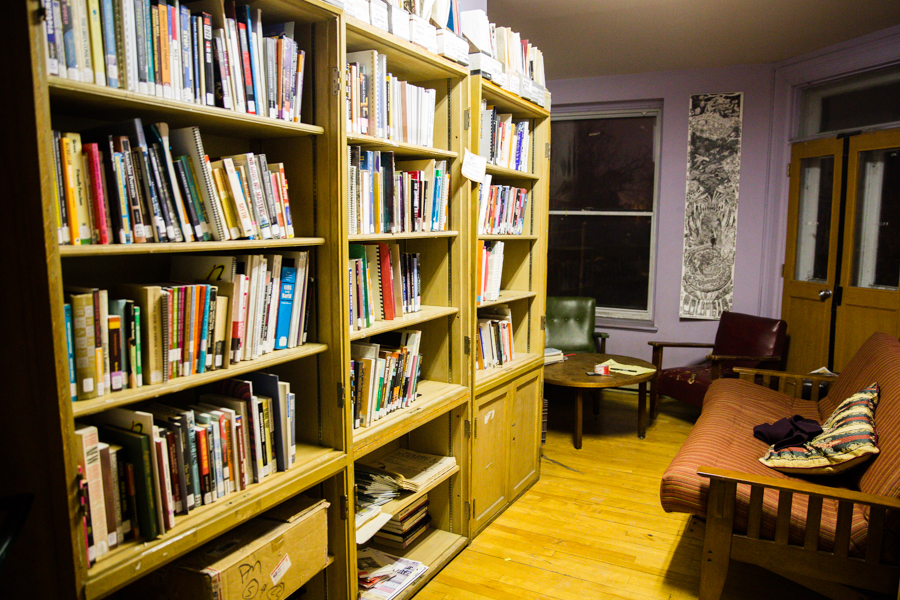 When I started my undergraduate studies, I was painfully shy and lonely. I knew I wanted to get involved with activism, but I was way too intimidated by most groups on campus. The first sense of community I found was in a small radical library. There I was exposed to amazing books and zines, activist organizing, and new friends. Since then, I have been a part of several different radical libraries, and have been continually impressed by the dynamic ways in which they foster connections, radical thought, and community.

There are several radical libraries in Montreal that provide the community with materials that are hard to get anywhere else. Many of these libraries are integrated into activist organizations, such as QPIRG-McGill, a non-profit, student-run organization committed to environmental and social justice issues where I work. Part of QPIRG-McGill’s mandate is to take an intersectional approach to anti-oppression work. For the library, this means actively seeking out materials written by people with disabilities, people of colour, Indigenous people, trans people, queer people, and self-published authors. As such, library patrons interested in one area of anti-oppression literature will often uncover intersecting areas of activism they have never thought about before.

The radicalizing potential of such alternative libraries lies not only in the materials they provide, but also the connections that they facilitate. The other day a new patron came into QPIRG-McGill’s library for the first time, looking for books about feminist perspectives on environmentalism. The topic was new to her and she was unsure where to begin. One of our regular patrons suggested that we started by looking for books written by Indigenous feminists. In doing so, she encouraged us to think about the role colonialism plays in environmental destruction.

The radicalizing potential of such alternative libraries lies not only in the materials they provide, but also the connections that they facilitate.

What started as a simple request for books turned into a more complex look at the ways different forms of oppression are connected. More often than not, helping patrons find books is about more than just simply directing them to the correct shelf. It is about taking part in critical conversations about social and environmental justice.

There is also something to be said about the power of representation. Being systematically erased from literature and mainstream media is in itself an act of oppression. Many people grow up never seeing themselves represented, or just as bad, seeing distorted homophobic, racist, fatphobic, transphobic, and ableist depictions. Finding authors who speak to your experience becomes an aching need.

To illustrate, while I was coming out as genderqueer, volunteering at a queer library felt like coming home. Being surrounded by queer authors and characters, when I’d grown up never seeing myself represented anywhere, was a healing process. I love getting to facilitate that process for other people. Conversations about what types of resources people need often bring up what they are going through in their personal lives. During my time volunteering at a queer library, I had one patron tell me I was the first person they came out to. While they could have gone to one of the many queer groups or peer counsellors just down the hall, they chose to come to the library first. I think what made that person approach a librarian first was the idea that talking about books could be a safe way to build connections. For shy people, joining radical libraries provides the space to explore new ideas at their own pace. This goes for our volunteers too, whom for the most part are volunteering in an activist organization like QPIRG for the first time.

Many people grow up never seeing themselves represented, or just as bad, seeing distorted homophobic, racist, fatphobic, transphobic, and ableist depictions. Finding authors who speak to your experience becomes an aching need.

Once, one volunteer told me he wasn’t confident in recommending books because he felt he wasn’t knowledgeable enough about anti-oppression activism. During the same volunteer shift, he pulled Michael Braungart and William McDonough’s book Cradle to Cradle from the shelf and started telling me how it’s written on this special recycled material that can be wiped clean and rewritten on. I’d never noticed this book before, and now it’s definitely on my to-read list.

This is why library volunteers are so vital to how the QPIRG-McGill library runs. An intersectional, anti-oppressive approach to libraries means it can’t just be one person calling the shots. The library needs to bring together the voices of the community it is serving. This means that library committee meetings often become spaces for volunteers to exchange ideas and share skills.

During one meeting, library student and volunteer Alan Reed taught us how to tell whether books are independently published or come from small publishers by looking at specific numbers in the ISBN. Other meetings have turned into long conversations about different anarchist theorists, and how they fit with our anti-oppression mandate. By critically engaging with the types of materials we have or want to have, volunteers shape the role the library plays in the community.

QPIRG-McGill has a collection of over 300 zines, many of which are created by local artists. They are often beautiful and deeply personal works, some of which are now hard to find anywhere else or are completely out-of-print.

The library at QPIRG-McGill also acts as a record of the Montreal activist community through our collection of zines, which are self-published, cheaply made, non-commercial works that are generally short in length and often have a do-it-yourself aesthetic. QPIRG-McGill has a collection of over 300 zines, many of which are created by local artists. They are often beautiful and deeply personal works, some of which are now hard to find anywhere else or are completely out-of-print.

Preserving and providing access to these time capsules of the Montreal activist community in this way is one of the library’s most important roles. However, zines are also a particular challenge to librarians: a librarian’s job, in part, is to create some semblance of order so people can access materials, but zines as a medium are purposively disorderly. They are irregular sizes and made of flimsy paper, making them difficult to shelve. They rarely contain dates and often don’t even include the name of the author. Many of the volunteers at the QPIRG-McGill library are doing their Masters in Information Studies in hopes of becoming librarians, so one of my favourite exercises is to sit down with them and figure out how to catalogue zines, which can sometimes consist solely of doodles of naked bodies. What makes radical libraries so fun and challenging is the ways they embrace an ethos of disorderly order.

If you haven’t already, I highly recommend checking out some of Montreal’s radical libraries at organizations such as the Union for Gender Empowerment, the Centre for Gender Advocacy, QPIRG-Concordia, and QPIRG-McGill. There you can browse through diverse collections of books, magazines, DVDs, and zines. However, radical libraries are so much more than just collections of resources. They are necessary spaces that allow people to discover themselves, develop connections, and allow radical knowledge to thrive.

Nina Maness is a Masters student in Information Studies. To contact them, send an email to library.qpirgmcgill@gmail.com.