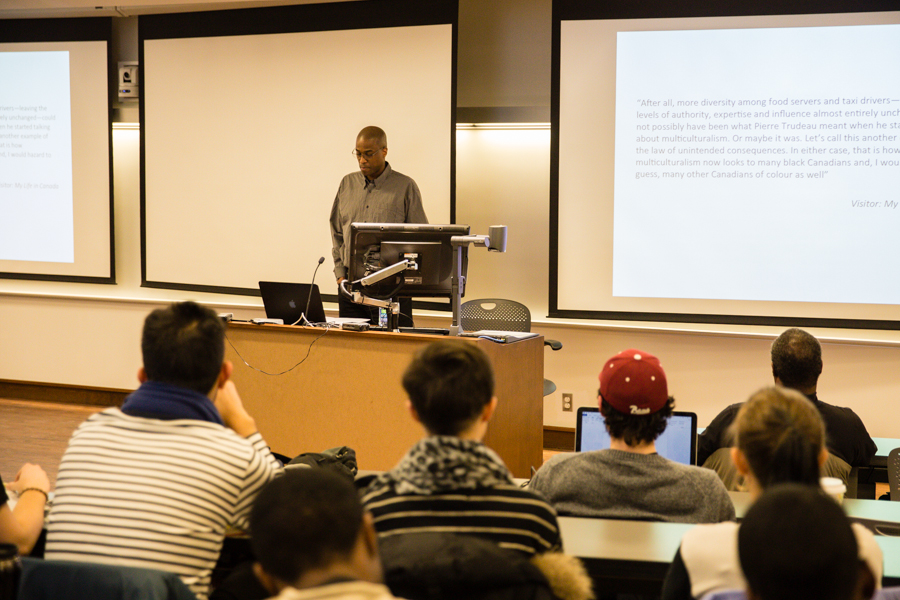 Anthony Stewart, a professor of English at Bucknell University, gave a series of talks at McGill this week entitled “Talking Black to Canada.” Drawing partly on his own experience of growing up as a person of colour in this country, Stewart offered a penetrating analysis of Canada’s collective perception of itself as a tolerant, multicultural nation.

Speaking to a packed lecture hall on Friday afternoon, he discussed the consequences of this shared perception, and the extent to which it is divorced from the everyday realities faced by people of colour.

“Canada’s national story claims, in essence […] that of all the human social arrangements in the history of the species, Canada, and Canada alone, has been able to exist without racism,” said Stewart. “That’s arrogance.”

He explained that another widely-held notion – among white Canadians, at least – is that if racism does exist in their country, it is nowhere near as serious or as prevalent as in the U.S.; or, if it used to exist, the situation has improved immeasurably.

This, said Stewart, is not an acceptable response to racial inequality. “What I want you to understand is that not being as bad as someone else is not good enough, and still comes at great cost to those whose experience and existence contradicts the story.”

Stewart emphasized that this story is harmful. “Constantly being told that there is not a problem, when you know there is one, does things to you cognitively,” he said.

“I became aware from an early age that my claims to my own Canadianness were under constant strain.”

To illustrate the damaging effects of this narrative of colourblindness, Stewart alluded to the incident in 2013 when Chris Spence, former director of education at the Toronto District School Board, stepped down over allegations of plagiarism.

“When [Spence] loses his job under suspicion of plagiarism, while the mayor of the same city keeps his job despite […] criminal activity […] we are within our rights to remember that Chris Spence is black, and Rob Ford is white, even if the national story tells us that race doesn’t matter in such, or indeed in any, decision-making in Canada.”

Stewart explained that he himself had experienced the unsavoury reality of racism in Canada, from racial taunts in the elementary school playground to more insidious forms of discrimination in the academic world.

“I became aware from an early age that my claims to my own Canadianness were under constant strain; a strain that only increased as I aged, gained more academic credentials, and grew increasingly aware of the stories I was relentlessly told about the nation where I was born. Stories that, more often than not, imprinted upon me a sense of non-belonging, of being insufficiently Canadian,” said Stewart.

In the end, said Stewart, we must think critically about the national narratives we create for ourselves, and work toward re-imagining Canada so as to deal better with our differences.

“Stories construct our reality, right? They’re really central, and some people argue they’re the only way for us to understand our world. […] The good news is, we can change stories, and maybe, maybe, maybe, if we change enough stories […] then we can change ideology.”

Speaking to The Daily after the event, Lerona-Dana Lewis – a representative of Community-University Talks (C-Uni-T), which organized the lecture – expressed satisfaction with the attendance and audience participation. “Usually when it’s something that addresses people of colour, very few people come,” Lewis said. “It’s really encouraging to see that [so many students attended].”

C-Uni-T is a Montreal organization that raises awareness regarding issues faced by people of colour on university campuses. “It really gives undergraduate students who are facing racism a space to talk about this, and to know that other people understand what they’re saying,” said Lewis.

“Oftentimes, people tend to internalize, and think ‘it’s my problem,’ but as we heard from [Stewart], it’s the story that we’ve been told about Canada being this place where everybody’s welcome. In fact, some people are not welcome.”