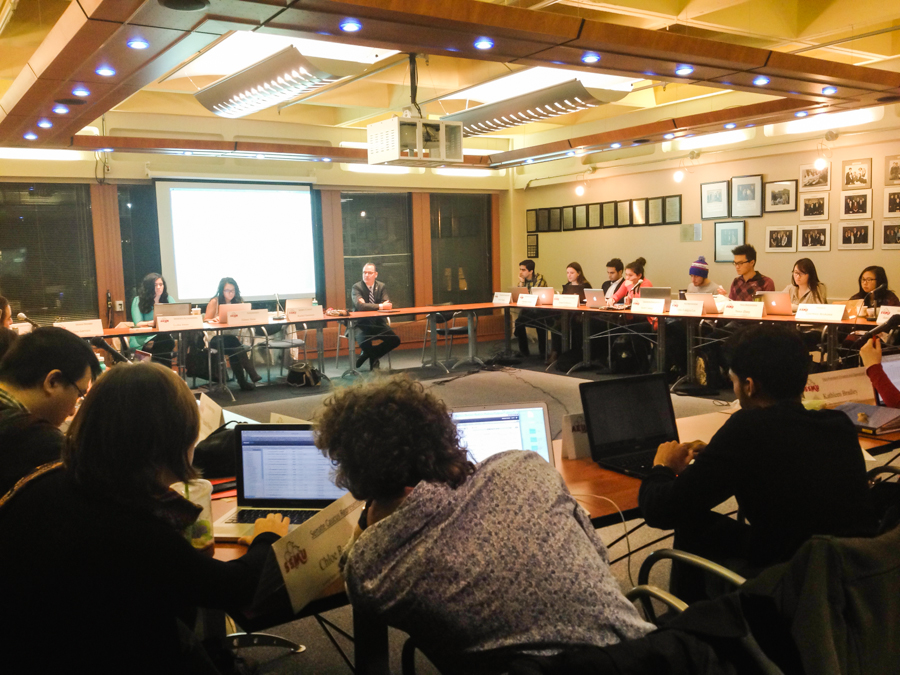 The Students’ Society of McGill University (SSMU) Legislative Council convened for its final meeting of the year on December 4. Council granted ECOLE independent group status, discussed ways to engage constituents with SSMU, and passed a motion against police brutality and racialized law enforcement in solidarity with the protests in Ferguson.

Council passed a motion giving the ECOLE project Independent Student Group status, and thus an official tie to SSMU. ECOLE is a community and research centre that aims to promote sustainability and to be a model for sustainable living, according to ECOLE facilitator Emily Boytinck.

“Institutionalizing ECOLE’s relationship with SSMU was crucial to the long-term sustainability of the project,” said Arts Senator Kareem Ibrahim, a member of ECOLE’s board of directors, in an email to The Daily. Ibrahim, along with two other councillors, abstained from the vote due to involvement with the ECOLE project.

Ibrahim also noted that this new status would allow ECOLE to secure funding through a fee levy when its current funding, provided by the Sustainability Projects Fund (SPF), ceases at the end of the academic year.

Several councillors brought forth a motion to ask that representatives invite their constituents to certain Council meetings, so that students could take part in discussions and engage with SSMU.

“Most students don’t know what SSMU Council is or what it does,” said Ibrahim, one of the movers. “[Students] should come to SSMU Council in a proactive way, rather than a reactive way.”

However, other councillors were critical of the motion. “I don’t see how students sitting and watching us talk for four hours is really an active, engaging, two-way communication relationship,” said Arts and Science Senator Chloe Rourke.

“If most of the public doesn’t know what SSMU Council is or how to access it, we’re far from fulfilling our roles as representatives and informants.”

President Courtney Ayukawa argued that the motion was unnecessary, as encouraging students to attend Council meetings was already in councillors’ mandates.

Medicine Senator David Benrimoh contested, “There is value in reminding people, look: this is your legislative body, we are here for you, if you would like to see our deliberations, how we work and how we make decisions that affect your daily lives, you’re welcome [here].”

The motion failed. “If most of the public doesn’t know what SSMU Council is or how to access it, we’re far from fulfilling our roles as representatives and informants,” Ibrahim told The Daily, expressing disappointment with the outcome.

In the context of the grand jury decisions not to indict officers for the killing of Michael Brown in Ferguson and of Eric Garner in New York, and the growing number of black deaths at the hands of the police, Council voted to condemn the decisions, as well as police brutality and racialized law enforcement, and to work with the Black Students’ Network (BSN) to release a statement on the issue.

“This is something that does affect our student body,” said VP University Affairs Claire Stewart-Kanigan. “It is not a neutral act to remain silent.”

Ayukawa took issue with the fact that BSN had not been consulted in the drafting of the motion. “I’m uncomfortable with a room full of people that do not seem visibly black passing this motion,” she said.

“[It would have been] ideal to consult the BSN in writing this motion, but given the time constraint, consultation was only had with the SSMU Equity Commissioners,” Ibrahim, one of the movers, told The Daily in an email.

Halfway through the discussion, BSN representative Élie Lubendo came to the meeting, having being informed of the motion by a councillor. After consulting other BSN members, he voiced support for the motion despite the lack of consultation, and proposed an amendment to include the deaths of other black civilians, to show that this was an issue “all across ages, all across genders.”