Could Canadian teams compete in the U.S.? 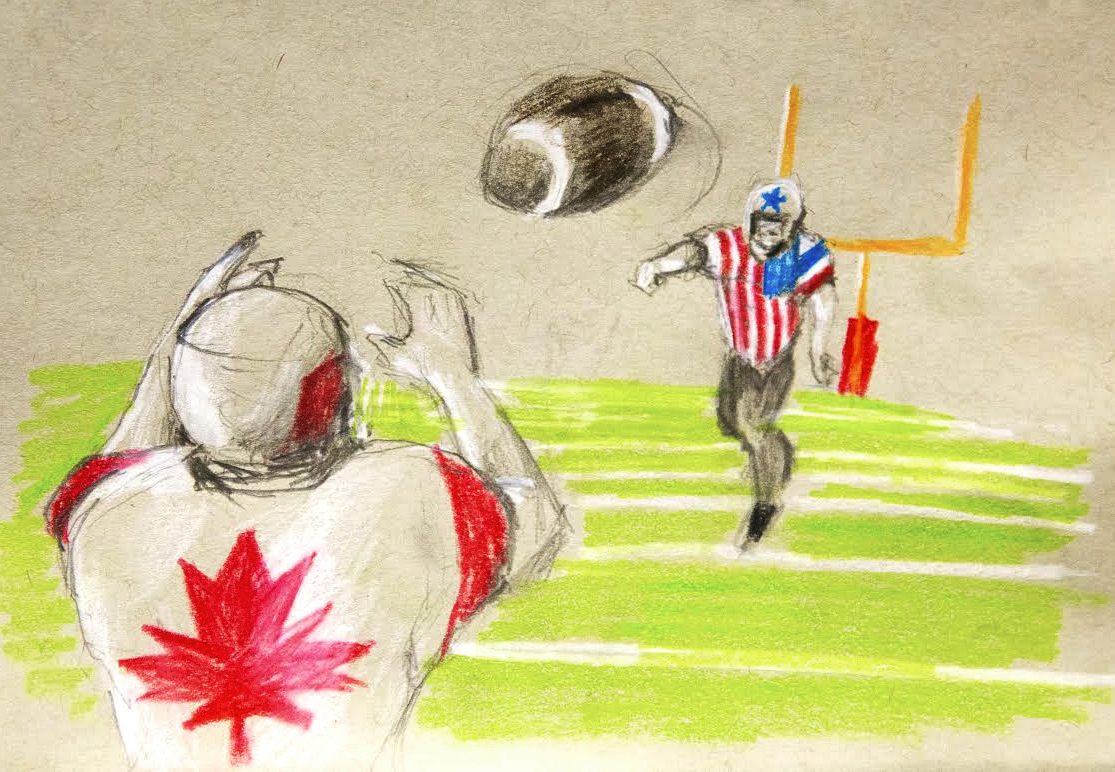 During my first week at McGill, I remember walking down University with a new friend from the U.S. in an attempt to find somewhere to buy groceries. We both had no idea where we were headed, and we were bound to have an adventure. On our way down the hill, we passed by Percival Molson Stadium and heard a roaring crowd. She asked me what the noise was, and immediately I replied, “The Alouettes…,” as if she should have known who that was – and well, she was oblivious. For some reason, many of my American and European friends that I have met in my first semester at McGill were initially unaware that Canadian football was a sport. It might be different than American football, but yes it is a sport.

The first difference you will notice between Canadian and American football is the size of the field and the number of players. In Canada, the field is ten yards longer and wider, and each end zone is also ten yards longer. In order to compensate for the larger field in Canada, the game is played with one extra player, allowing 12 players per team on the field at once (as opposed to 11 in the U.S.). Another important difference to note is the number of downs, or attempts the offence has to move the ball ten yards, resetting the play. In Canadian football, a team only has three attempts, which makes the passing game more dominant, as opposed to the running game. This is because the ball is more likely to travel the ten yards needed for a first down with a pass. However, despite the differences in rules and style of play, there is still a large amount of potential for Canadian players and teams to compete in the American system.

In May, the NFL hosts its ‘Draft Day’ at the Radio City Music Hall. The majority of the players that are drafted over the span of three days come from collegiate level-football in the U.S., called the National Collegiate Athletic Association (NCAA). Most ‘up-and-coming’ football players play at this level. This is where athletes are able to develop to the best of their abilities, which could earn them a spot on a professional football team. The NCAA is so large that it not only provides the NFL a bountiful pool of players to choose from, but it also provides CFL teams with the same option. The reason that Canadian players make the jump over to the NCAA is because the sheer size of the program allows for more options for scholarships and visibility to NFL scouts.

The CFL draft also draws players from Canada’s collegiate division, the Canadian Interuniversity Sport (CIS). The CFL has rules based on the eligibility of players on their respective teams. Since the CFL is allowed to draw players from the NCAA to their teams, the league has implemented a rule on how many non-import players need to be part of the 41-man roster. A non-import player is simply a Canadian citizen, and there must be 21 of them on the team. The majority of these players will come from the CIS.

The CIS is separated into four divisions that are divded by geographical area. In the middle of Canada, we have Ontario University Athletics (OUA) which consists of 11 teams. A little to the east we have the Réseau du sport étudiant du Québec (RSEQ), which consists of six teams. Further east there is the Atlantic University Sport (AUS), which consists of four teams, and all the way to the west we have the Canada West division, which also has only six teams. The CIS is represented by a total of 27 Canadian teams spread across four divisions, which is much smaller than the NCAA, which has over 600 teams spread out over 67 divisions.

Is it possible that a CIS football team could compete in the NCAA? The simple answer is yes. The caliber of football is generally based on the division, where Division I is the highest. Simon Fraser Univeristy (SFU) was initially a part of the NCAA up until 2001. In 2002, SFU transferred into the CIS. For six out of eight seasons in CIS play, SFU was unable to make it to the playoffs and overall had a record of 16 wins, 47 losses, and two ties. Now, since transferring back to the NCAA, playing in Division II, SFU holds a record of 13 wins and 33 losses.

Depending on the NCAA division, there is potential for a few CIS teams to actually compete in the U.S.. The majority of CIS teams could play competitive football against certain teams in Division III, but for the most part, there are only a few teams who have shown they could compete in the higher-level Divisions I and II.

In the last 12 years, three CIS teams have dominated the league, making multiple appearances to the Vanier Cup. These teams include McMaster University, the University of Calgary, and the CIS powerhouse, Laval University. I strongly believe that all three of these teams could make a large impact in Division II of the NCAA if they were ever given the opportunity to do so. I also believe that Laval has proven itself good enough to be able to compete in Division I of the NCAA, having made eight appearances to the Vanier Cup in the last 12 years, and having won seven out of eight times.

Aside from CIS teams being able to compete in the NCAA, the CIS itself has developed individual players who have gone on to have successful NFL careers. Last year,Laurent Duvernay-Tardif, an offensive lineman from McGill, was drafted to the Kansas City Chiefs 200th overall. Not only was he drafted to the NFL, but he also earned a spot on the the Chiefs’ dress roster, and has seen action on the field.

In 2001, Randy Chevrier, a long snapper from McGill who won the J.P Metras Trophy (the award for the most outstanding lineman in the CIS), was drafted to the NFL by the Jacksonville Jaguars in the seventh round of the 2001 draft. He later moved on to play in the CFL where he earned the Tom Pate Memorial Award (an award for outstanding sportsmanship and community contributions) in 2014.

Of course the majority of players in the NFL are from the U.S., but there are currently 17 Canadian athletes on their dress rosters. This statistic goes to show that there is always potential for Canadian athletes to make it to the ‘big leagues.’

Canada has played host to its fair share of talented football but overall, both games are completely different. The games differ in the rules, number of players, field size, and most of all, the size of the sport in its respective country. The U.S. is always thought of as the football nation, but interestingly enough, the first ever modern game of football was played between McGill and Harvard in 1874, showing that Canada has deep football roots as well. Yes, football is much smaller in Canada than it is in the U.S., but you wouldn’t guess it by the sound of the cheers when the Alouettes are in.