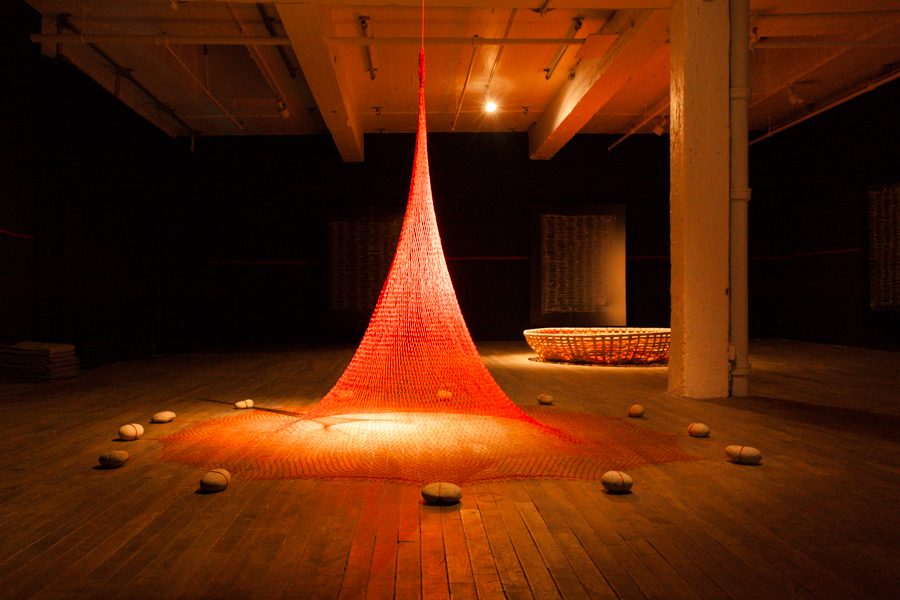 What does it mean to have a mark of permanence, a lasting wound? Nadia Myre’s multimedia exhibit “Oraison” grapples with traumatic experiences and the physical, emotional, and psychological scars they leave behind. Through photography, sculpture, and sound, Myre creates an understanding of collective memory that, in bringing together different scars, unites us in healing.

Nadia Myre presents “Oraison” as a response to her nine-year endeavour, “The Scar Project.” The project engaged various communities like schools and cultural centres, in a collaborative exploration of memory and its permanence. In an interview with The Daily, Myre explained that “The Scar Project” had initially been inspired by a previous project of Myre’s where over 230 participants partook in beading over the Indian Act with red and white beads, a process that took fifty to seventy hours to complete. Myre, an Algonquin member of the Kitigan Zibi Anishinabeg First Nation, described this as “a way of representing one’s identity with Canada, addressing the elements that had been lost,” and reclaiming them. The theme of Indigenous identity in Canada appears to be a strong, underlying element of the inspiration for the “Scar Project,” grappling with collective wounds. The exhibit too sheds light on how certain individual scars are intertwined with shared histories of oppression.

With “The Scar Project,” Myre sought to explore internal scars and how memory can manifest itself on the physical body. With fibres and threads, she invited participants to sew images of their physical, emotional, or psychological scars on canvas. Myre also intended to create a healing space, where participants could recognize their scars, unravel them, and find closure through creative expression.

“Oraison” presents a projection of all the pieces sewn by the participants, photographed by Myre. Ten or so canvasses projected consecutively all show similar, swirling forms; the pieces are grouped together based on patterns such as common subject matter or shape. The recurrence of these themes throughout the pieces is deeply thought-provoking, pushing the viewer to question what compelled these unrelated individuals to represent their completely different stories in such similar ways. The physical scars in the pieces appear more linear, whereas more tangled, complex shapes portray internal wounds. Some scars take symbolic shapes, like hearts or snowflakes. None of the shapes particularly stand out; rather, what makes an impression is the unity found amongst the pieces, despite their different creators.

Also striking is the wide basket which sits the main room, made of threaded wooden shards and filled with red cloth bundles which are “meant to be symbolic of prayer,” Myre noted. With each scar that’s experienced, Myre adds a bundle to the basket to symbolize of validation and support. During the vernissage, the projects’ participants also added bundles to the basket, effectively conveying a sense of continuity. The basket creates an open, secure, and comforting space, there to gather and hold us when we feel the need to be held. The threading of the basket almost mirrors the threaded scars.

The main space also includes a red net being slowly lowered to the ground, expanding and shrinking as it rises and falls. According to Myre, the netting is symbolic of “going out and harvesting these scars.” The broad netting acts as a breathing lung, bringing life and relief onto the darker subject matter sewn into the exhibit. Rising and expanding, it creates an open space for the stories and scars to be held. The basket and the netting also function as visual symbols of how these experiences are ongoing but can still be experienced collectively based on the emotional undercurrents that tie them together.

The participants’ pre-recorded stories form a sound overlay for the exhibit. Their words convey the sadness, frustration, and anger behind the scars in a more profound way. The participants’ voices bring the stories to life, and gives each one a tangible character. Some of the stories touch on the deaths of family members, or relationships that went awry. In one narrative that stands out, the speaker describes their sister, saying, “My scar: missing her is my scar.” The fragmented stories are quite short – that they stream and flow into one another echoes the concept of collective memory. Though the experiences differ, they can all be brought together to coexist in one harmonious space.

The common thread running through all these scars is the profound impact of memory on the human spirit. Despite this unifying thread, however, the themes addressed by the exhibit sometimes feel broad and vague, leaving a sense of yearning for more depth and specificity. Perhaps it would’ve been helpful to know the background of each participant’s story, or what specific aspect of their identity they felt had been scarred – their gender or role as a daughter, for instance. These details are only hinted at in the exhibit.

What “Oraison” does best is translate the powerful and personal effect of “The Scar Project” as a form of communal healing into an immersive experience. Through the layering of different mediums – photography, sculpture, and sound – Myre mirrors the broader significance of the exhibit: the rendering of seemingly different scars into a healing collective.

The  “Oraison” exhibit is open until Saturday, December 13 at OBORO.