The politics of science

The federal government’s influence on scientists 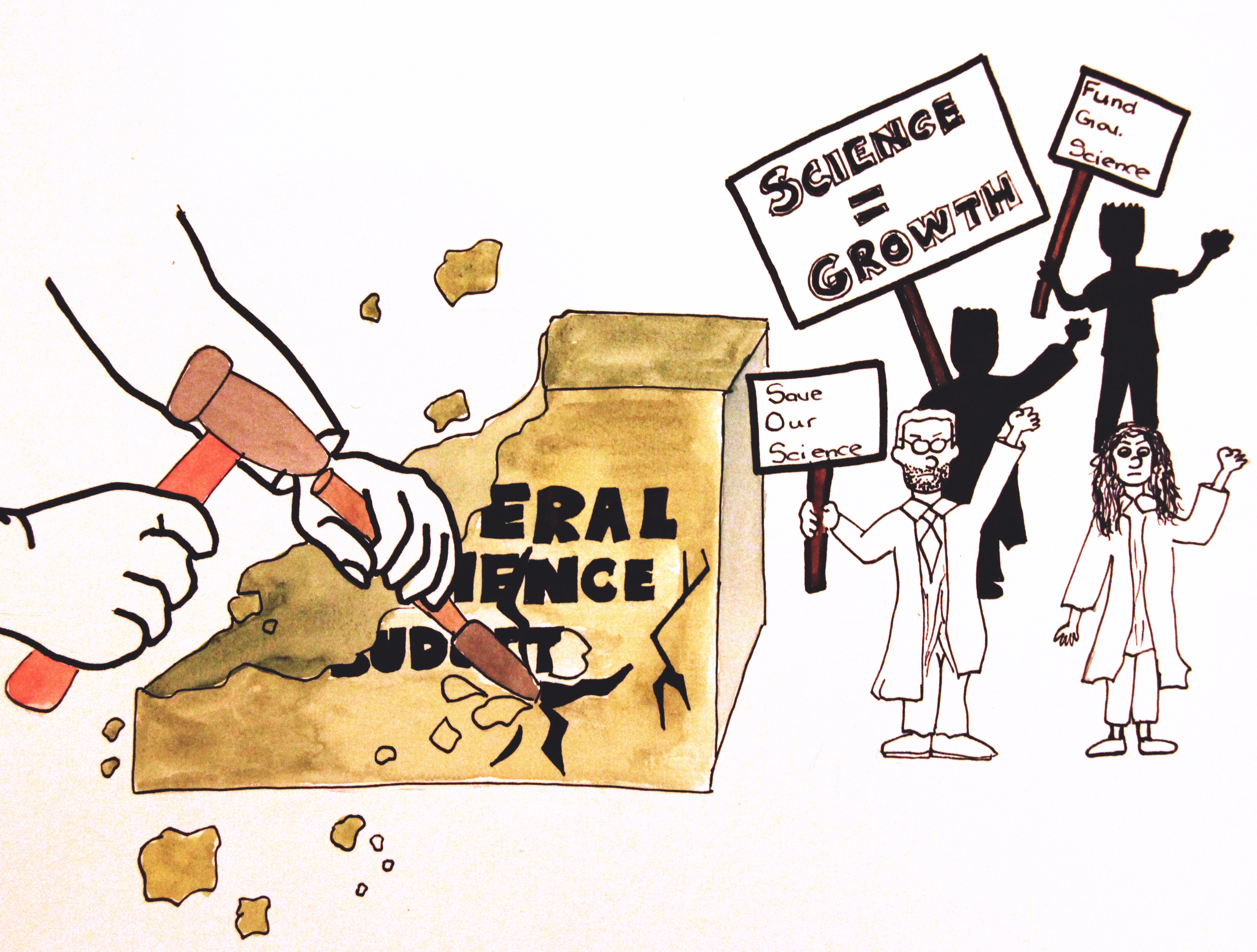 Federal budget cuts to publicly-funded science in Canada are detrimental to the future of scientific progress in critical areas like healthcare and clean energy. Science funding has transitioned from a focus on longterm social benefit to one of immediate gratification, with economic gain prioritized above all else. Consequently, scientists can no longer engage in research for the purpose of science.

The Professional Institute of the Public Service of Canada (PIPSC) recently published a report with shocking statistics about federal cuts to science. Between 2008 and 2013, $596 million was cut from science and technology at federal departments and agencies. This resulted in the elimination the equivalent of 2,141 full-time positions. These cuts have also had a drastic effect on departments like Environment Canada, which has seen cuts of $125 million, or 17.5 per cent; the National Research Council at $129 million, or 17.2 per cent; and Fisheries and Oceans at $28 million, or 10.2 per cent.

Canada runs the risk of coming to a standstill in scientific advancement, the drastic effects of which will be noticeable in the near future. According to Stephanne Taylor, a McGill PhD student in Atmospheric and Oceanic Sciences, cuts that affect research facilities have longterm consequences. Taylor told The Daily, “Research projects can’t just be shut down and then revitalized at the drop of a hat – closing a lab means halting years of ongoing research and work, and it takes considerable time [and funding] to restart all that background work that allows a lab to run effectively.”

Federal scientists serve the public by providing the knowledge needed to make informed decisions. They are affected by the restrictions that federal science budget cuts impose; as such, they are unable to fulfill this duty to the public. As scientists employed by the federal government they are faced with an unavoidable identity crisis: in order to serve the public interest, they are forced to decide whether to thrust themselves into the political limelight and take action, or remain as neutral as much as they can.

In a statement to The Daily Edward Ruthazer, an associate professor in the Department of Neurology and Neurosurgery, said, “Science and politics are fundamentally different things.” According to Ruthazer, “the act of carrying out good science can be done in a political vacuum,” but the federal government is forcing scientists out of their traditional role. Scientists have been forced to engage in numerous political issues, such as objecting to current policies concerning scientific research and funding. CBC covered a protest held by scientists in Winnipeg on federal budget cuts to labs in Manitoba and across the country. A major concern of protesters was that “oppressive policies are being imposed on government scientists that restrict their ability to communicate their scientific findings.” CBC interviewed Pamela Godin, a science graduate student at the University of Manitoba who said, “As a scientist I’ve seen these cuts, and it’s made me more passionate. It’s made me more political.” If scientists do not advocate for policy change, no one else will.

“Research projects can’t just be shut down and then revitalized at the drop of a hat – closing a lab means halting years of ongoing research and work, and it takes considerable time [and funding] to restart all that background work that allows a lab to run effectively.”

To be credible in the scientific community, one must be associated with either an academic or governmental institution. Canadian federal scientists’ association with the federal government has proven to be detrimental to their ability to pursue their work. Scientists, most notably federal environmental scientists, are being prevented from freely sharing and discussing their findings and data with the public. Moreover, in a survey of over 4,000 scientists conducted by PIPSC, 91 per cent of participants were worried that federal science cuts would impede their ability to serve the public, with environmental research and regulation cited as the area of highest concern among respondents.

The government can also deem research proposals from federal scientists as non-essential, often for reasons of economic disadvantage. Darin Barney, Canada Research Chair in Technology & Citizenship, told The Daily via email, “The government has retracted support for both disinterested scientific inquiry and scientific investigation connected to the regulation of industrial activity. At the same time, it has maintained substantial investment in scientific research connected to commercial and technological development.”

Ultimately, the government is deciding what science is to be done and is hindering the freedom and choice that scientists have. Scientists are forced to halt basic scientific research and pursue research that has been approved by those who are funding their projects, meaning that research is driven by economic concerns rather than social value. Barney highlighted that “the real conflict is not between abstract notions of environmental protection and economic gain,” but rather between “the class of capitalists who benefit disproportionately from resource depletion and the class that will suffer its consequences most heavily.”

Most environmental research falls under basic science, and the importance of this research should be self-evident. Additionally according to Taylor, “Basic science research is the foundation of the applied and industrial science research of the future […] without that exploratory knowledge, our applied research will stagnate.”

Prime Minister Stephen Harper’s government should be focused on public health, safety, and the environment; it should take the public’s best interest to heart. Ruthazer noted that large swaths of the Canadian economy are based in resource extraction, especially with the network of proposed pipelines and increased exporting of tar sand oil. According to Ruthazer, this creates a conflict between economic gain and environmental protection, especially at a time when carbon dioxide emissions need to be drastically reduced in order to combat climate change.

Canada’s global identity and reputation is slowly declining because of decisions made by our government. Foreign scientists have asked Harper to “restore science funding and freedom,” in an open letter drafted by the Union of Concerned Scientists, a group that represents U.S. scientists. The letter was signed by scientists from over 32 countries. “Canada’s leadership in basic research, environmental, health, and other public science is in jeopardy.” This is substantial evidence for the consequences of scientific budget cuts, and that restrictions have not been confined to Canadian borders.

The reputations of Canadian scientists on a global scale are on the line if they do not stand up and protest policies that are incongruent with their beliefs and the requirements of their jobs. Scientists do not solely hold the responsibility of bringing about change; ordinary citizens and the federal government share the load. It is up to the federal government to recognize that basic research funding is crucial for the progress of society and it is their responsibility to promote rather than neglect or prevent basic science research. Citizens should recognize the negative effect federal science budget cuts will have in the foreseeable future and must stand up for their right to be informed.

Canada’s identity is being put on the line, and if federal cuts to science continue, we can only imagine the detrimental impact on scientific development. Scientists are faced with the identity crisis: in order for them to pursue science for the benefit of the public, they are being forced into political confrontation. We need to stop only investing in research which promises industry and economic outcomes, and continue to fund basic science research that’s needed to discover future innovations. Who should set the goals for science – a government with misaligned priorities, or the scientists themselves?