How the media misrepresents a voice of a generation 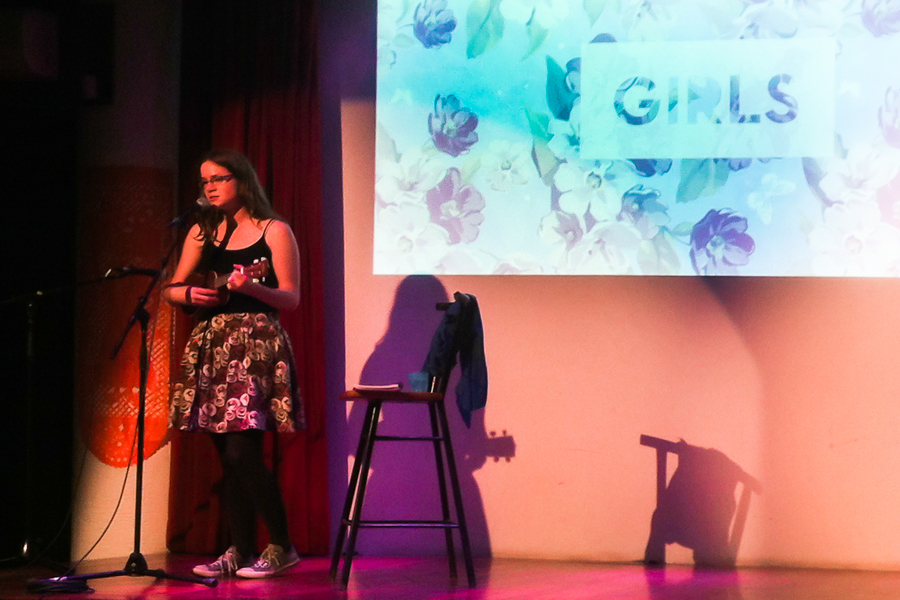 “I think that I may be the voice of my generation –or at least a voice of a generation.”

Lena Dunham will probably be overshadowed by this sentence for the rest of her career. The fact that Hannah Horvath, the main character in Dunham’s Girls, was high on drugs when she made this pronouncement, seems to get lost in the popular discourse that Girls has sparked in the media, online, and around the dinner table. Dunham is hailed as an icon, a maker of media, culture, and style, and a role model for young women. The popular rhetoric around her show ranges from discussion on the everyday abuse that modern women face, to the perpetuation of the negative perceptions of women that Dunham’s work strives to overturn.

Responding to these sexist themes in media representation of Dunham and women in general, Concordia Masters students Chelsea Barnett and Dane Stewart created Free Press Libre, a monthly anti-oppressive art event that addresses “the lack of formal opportunities to respond to the media” concerning different cultural issues. In Free Press Libre’s first event “Girls: The Voice of a Generation(?),” Barnett and Stewart took aim at the media’s portrayal of Dunham’s work, inviting a variety of artists to contribute to the conversation. Through performances, essays, video compilations, and personal narratives, the evening brought a raw outlook on the discourse of Girls that some might say has been exhausted since it first aired three years ago.

The artists engaged with Dunham’s work and the subject of women in the media in a multitude of ways, their presentations balancing between a focus on individual stories and collective experiences. Gillian Sonin, a Concordia artist, presented a personal perspective, exploring Dunham’s importance to her by recounting a trip to see Dunham speak in Boston. Sonin’s highly engaging narrative mapped out her relationship with Dunham’s depiction of the lives of women that, as she put it, gives her “shivers of recognition” and an incredible “[sense] of consciousness.” As a Masters student focusing on naked performativity, Sonin described how Dunham’s casual use of nudity in Girls allowed her to reflect on the way the world sees women’s bodies and the pain inflicted upon them.

Stewart’s presentation was less about Dunham’s importance as a cultural figure and more about how her cultural figure is the subject of abuse. Through article exerpts, he depicted the jarring framing of Dunham by well-renowned authors in the media and questioned the foundations of their criticisms, pointing out how they are often premised in demoralizing and insulting characterizations of the female body. Frances Maychak, on behalf of the Sexual Assault Centre of the McGill Students’ Society (SACOMSS), also addressed representations of sexual violence and consent in the TV show.

Building off of Sonin’s use of the autobiographical narrative, but less directly about Dunham and Girls, the most organic presentations of the evening were a series of “Subway Essays.” Essay readings by Barnett and Dylan Boyko allowed for a moment of reflection on the complex circumstances in which sexual assault often occurs, and the strength of these survivors who carry on – particularly in light of Dunham’s work exposing these abuses for what they are: abuses. An essay by Boyko on the “silent heroes” surrounding him on public transit demonstrated the beauty and strength in the everyday, explaining that the seemingly innocuous city dwellers are “interesting because they’re unaware of their own importance.”

Although remarked upon but never tackled head-on, numerous artists identified the race and class privilege of women portrayed in Girls as problematic, but ultimately defined this issue as distinct from the value of Dunham’s narrative. This critique of privilege seemed to be bubbling underneath many of the artists’ comments and behind questions from the audience. Solomon McKenzie and Ruby Sniderman featured perhaps the most explicit acknowledgement of the show’s privilege in a satirical skit that stated “we should be asking why POCs [people of colour] aren’t getting shows.” However, the evening would have seriously benefited from a more critical approach to the show. A more nuanced lens would have allowed for a far more engaging and open discussion of oppressive discourses not only in media but also in Dunham’s own show.

That said, the nature of the works presented and the depth of narratives told added a refreshing perspective on the misrepresentation of women in Western society that so many cultural critics demonstrate when addressing Girls. Encouraged by Dunham’s lead, the evening was a show of strength and, most importantly, of women’s voices being clearly heard.