Elizabeth May laments state of Canadian democracy at McGill talk 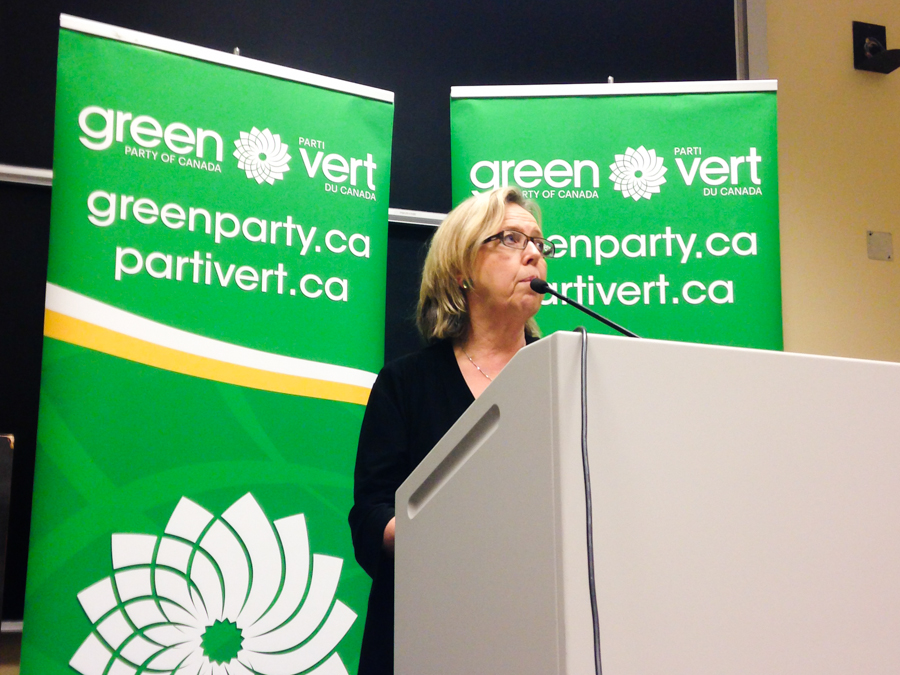 On November 8, Green Party of Canada leader and Member of Parliament Elizabeth May spoke at McGill’s Bronfman building, emphasizing the necessity of “restoring democracy” in Canada. The event was part of the launch of May’s new book, Who We Are: Reflections on My Life and Canada.

“I had the good fortune of working in Parliament when things worked a lot better than they do now,” said May, who was the senior policy advisor to former Progressive Conservative Minister of Environment Tom McMillan in the 1980s.

May argued that the shift in the last decades from a more cooperative Parliament to a partisan one has impacted the quality of Canadian democracy, which now “more resembles an elected dictatorship than a democracy.”

The boundary between the administrative and political compartments of government has eroded, she said, which has resulted in an increased concentration of power in the hands of the prime minister. May noted an increase in party discipline, an obstructive Senate, and Prime Minister Stephen Harper’s unprecedented decision to prorogue Parliament – which prevented a no confidence vote and the possibility of an alternative government being formed or an election being called – as indicative of the shift in Canadian political norms.

“[In Canada] all power is very much centralized in the federal government,” commented Jordan, a Law student at Université de Montréal. “The case has been made that for true democracy to work, it has to be a more local form of government. Unfortunately, here in Canada, local government is very weak. […] Municipalities have very little power.”

May lamented the low voter turnout in both federal and local elections, and implored the audience to encourage their friends to vote. “No democracy lasts if its citizens give it up,” she said.

Speaking to The Daily, May also acknowledged the value of forms of political action that go beyond voting, and spoke positively of the prevalence of public mobilization in Quebec.

“There’s a tremendous value in public mobilization, [such as] movements like Idle No More,” said May. “Any action that’s non-violent, even if its civil disobedience, that’s a very sensible […] part of the framework of a democracy.”

“The political culture in Quebec is very different from the rest of the country, the student protests here made it really clear,” May told The Daily. “Quebec has a very different willingness to get engaged, but it would be much healthier for democracy across Canada if Quebec wasn’t the exception.”

May spoke to The Daily about climate change, arguing that tackling this issue is possible within a capitalist global order, instead naming “corporate rule” as the problem.

“Corporate rule [is] allowing the people who are supposedly democratically elected in our society […] to consider their primary goal as enhancing corporate profits,” said May. “The problem […] is not global capitalism – the problem is the failure of democratically-elected governments to hold corporations to account and to limit their greed and excess.”

May spoke to the need to decrease the financial viability of fossil fuels as investments and energy sources. “We have to fix the market failure that pollution represents by […] making it [costly], and creating the incentives so that corporations of all sizes […] can recognize that an investment in fossil fuels is lost money.”

“I think divestment campaigns are fantastic,” added May, referring to campaigns by Divest McGill and similar groups across North America that aim to make universities let go of their investments in the fossil fuel industry.

“Telling universities and other institutions to divest from investments from fossil fuels, which are destroying our future, is a very strong, tangible, specific thing to do – and it raises the awareness of investors outside of universities. […] Very interesting to see the Rockefeller family, that made its money in Standard Oil, deciding to divest itself from fossil fuels.”

May emphasized that it was crucial to make action on climate change a major issue in the upcoming 2015 federal election.

“We really do need to make sure that […] [New Democratic Party leader Thomas] Mulcair and [Liberal Party leader Justin] Trudeau are both forced to give really detailed answers about what they will do to have meaningful, deliberate cuts in our dependency on fossil fuels, [to work] toward the transition away from fossil fuels altogether.”