Don’t dream it, be it

How Rocky Horror has been creating communities for forty years 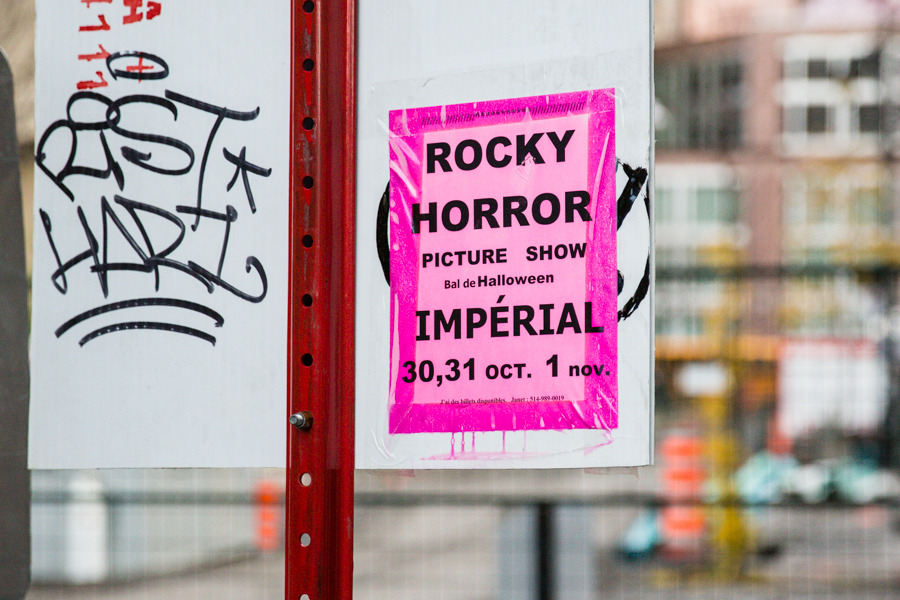 “Are there any virgins in the house tonight?”

I prodded my roommates to stand, remaining seated in between the two of them. They were not alone – the majority of the theatre was standing in response to the prompt from Plastik Patrik, the Master of Ceremonies for the Imperial Theatre’s annual Rocky Horror screening. Once all the Rocky Horror first-timers were standing, the theatre gave them the proper welcome: a rousing “fuck you!”

This tradition is just one of many that have become part of the Rocky Horror experience since it first premiered in 1973. For forty years now, fans have been dressing up for midnight screenings of Richard O’Brien’s masterpiece. At last Thursday’s screening, the theatre was packed – primarily with newcomers. Why, forty years later, are so many people lining up to dance the time warp? Why has this cult classic survived?

The Rocky Horror Picture Show began as a stage musical in 1973. While the original stage show in London was a success, its translation into film the following year was a monumental flop. The difference was size: the original London show took place in an intimate, 60-person theatre, where audience members were able to engage and interact with the live cast. In mainstream American multiplexes, the connection was lost, and most audiences could not make sense of the zany, tacky, in-your-face production that was Rocky Horror – the key word here being ‘most.’ Small audiences, while not large enough to keep the movie in mass screenings, became dedicated audiences – they returned, over and over again, to see the film. Midnight screenings of the film began in New York City just six months after its initial release. With the return of the original intimacy of the stage show, spectators were able to break the barrier between themselves and the screen: they began talking back to the film, bringing props such as toast and rice, and dressing up.

Rocky Horror became a subculture of its own because it created this close community of dedicated followers. When it was born in 1973, the Western world was still coming down from the liberations of the sixties. In the post-Kennedy, post-Martin Luther King, post-Woodstock seventies, conservatism was returning. For those who just missed the Summer of Love, or for those whose sexual and gender identities were the subject of severe repression, Rocky Horror was a form of liberation. Its depiction of sexual liberation, and its mantra of “don’t dream it, be it,” coupled with small screenings, allowed people to be themselves, without fear of judgement or violence. As June Thomas noted in a recent Slate article, the show “may have helped more people come out of the closet than any other work of art.”

At the Imperial last week, everyone had the same answer as to why they love Rocky Horror, virgins and veterans alike. As newcomers Annie and Audrey put it, “It’s free.” The Rocky Horror Picture Show is about liberation – sexual and otherwise. In creating a space for liberation, it creates a community.

Today, Rocky is not the underground sensation it was in the seventies, but it is a sensation nonetheless. It has arguably been adopted into the mainstream popular zeitgeist – the fact that there was an entire Glee episode dedicated to it is proof enough. But maybe this is one subculture that doesn’t need to remain ‘sub’ in order to retain its essence. Rocky Horror is not inherently ‘cult.’ Unlike subcultures like disco or punk, Rocky Horror was not created by the people – it began as high culture theatre, and was then marketed to mass audiences in film. It became a cult hit because, at the time of its release, its zaniness was unpalatable to mass audiences. In the 1970s, its depictions of sexuality, as well as queer and trans figures, made it oppositional to dominant culture – it was a ‘fuck you’ to the status quo. If Rocky Horror were released today, it would be no stranger than a Lady Gaga video.

No, Rocky Horror is not, at its core, a cult classic. The core of Rocky Horror is instead a line from one of its songs, its mantra: “don’t dream it, be it.” At the Imperial last week, everyone had the same answer as to why they love Rocky Horror, virgins and veterans alike. As newcomers Annie and Audrey put it, “It’s free.” The Rocky Horror Picture Show is about liberation – sexual and otherwise. In creating a space for liberation, it creates a community.

In the eighties and nineties, as North American society became more tolerant toward queerness and sexuality, Rocky Horror became less about transgression and more about self-confidence and self-love. In Stephen Chbosky’s 1999 young adult novel The Perks of Being a Wallflower, the main character Charlie – a 14-year-old white, straight, cis, male – builds his self-confidence and finds his community through regular Rocky Horror screenings.

Personally, I had a similar experience as Charlie. When I was 15, my school announced that it was putting on The Rocky Horror Picture Show as our musical for the year (the only reason the principal approved the show was because she thought our drama teacher had meant Little Shop of Horrors, not Rocky Horror). At 15, I was pretty uncomfortable with sexuality. I made as many sex jokes as the next 15-year-old, but when it came right down to it, I was shy, awkward, and generally lacking in self-confidence – and though I had never seen the whole movie, I hated Rocky Horror. It represented everything that made me squirm. But, being a music theatre nerd, I couldn’t not audition. And over the next four months, as we danced the Time Warp and staged sex scenes, and most of all as we learned the harmonies to “don’t dream it, be it,” I began to see the beauty in the show, and to believe its mantra. I understood the heartbroken Columbia, the deviant Riff Raff, and most of all, the prim Janet. By the end of the year, I had experienced a kind of sexual and spiritual awakening – and I wasn’t the only one. Many of my friends in the show also developed a similar kinship with Rocky Horror, and to this day, we still dance the Time Warp together.

Upon viewing today, the movie is not as ground-breaking as in the seventies ­– there are definitely instances of questionable consent. And perhaps there is an argument to be made against its adoption by wider audiences. But I believe that Rocky Horror doesn’t need to be a subculture to survive, because it thrives on creating community. It brings people together by encouraging an environment where everyone can be themselves and let loose, however loose that may be. As long as the screenings continue, more and more people will experience the Rocky effect. More and more people will have their own Rocky communities, from the original midnight attendees in the seventies, to my high school cast, to everyone who filled the Imperial Theatre last weekend.

This is why it’s so important to call out the virgins – they are what keep Rocky going. Identifying the Rocky virgins is a means of welcoming them into this community that has been freely dancing since 1973.